- Ditched work early, came home at around 9:15 p.m. Was nearly blown away from the insane snow and wind. Did the Korean mention New York weather sucks?

- Damn near had a heart attack to find the DVR was not working. Fortunately, regular TV worked, and figure skating did not happen yet. In fact, it would not happen for more than an hour.

- Instead of watching Nordic Combined again, the Korean opts for California v. Arizona basketball on ESPN while having dinner. Menu: kimchi jjigae and pajeon, courtesy again from the Korean Mother.

- Bears own the Cats. Go Bears! Jerome Randle is a stud. Too bad we will be killed the moment we run into any team with interior size in the Tourney.

- Flip the channel right on time for figure skating. Time to get nervous.

- This is rare. NBC seems to know that Kim Yu-Na vs. Mao Asada is a big freakin' deal. The introduction plays this up to the max, showing cross-clips of Yu-Na and Asada and repeatedly mentioning how significant the "rivalry" is between Japan and Korea. The Korean is not sure if "rivalry" is the right term. Cal-Stanfurd is a rivalry. Kobe-LeBron is a rivalry. Korea-Japan... that's something else, whatever it is.

- A lady with a super long last name from Georgia takes the ice. Proceeds to fall four times during the show. Slightly comforted by the fact that Yu-Na probably won't be this bad.

- Mao looks determined during warm-up. Yu-Na looks relaxed. Don't know which one is the good sign.

- Rachel Flatt takes the ice. Seems to do everything well. Somehow could not buy into her facial expression that was anything other than smiles.

- Apparently Flatt is going to Stanfurd. No wonder the facial expression is terrible.

- Ooh, Flatt got her jumps downgraded and does not even lead with better skaters ahead of her. Not good. Shouldn't have gone to Stanfurd.

- Ando Miki comes on with a hideous ancient Egyptian-themed dress. Half-expected the fashion police would swoop in on a Zamboni. Rare feat to be offensive with a costume that belongs to people who no longer exist.

- There is no energy in Ando's performance. The Korean thought maybe he was missing something, but the announcers immediately say that Ando is just "going through the motions." Well then.

- Yu-Na comes on. Apparently her pre-show routine includes cleaning boogers -- she did the same before the short program as well. Further proves that pretty girls can do basically anything in public and get away with it.

- The dominance of Yu-Na is really obvious. She goes into her jumps so fast that the entire routine appears much more natural. She also has the perfect physique with long limbs.

- Yes! No falling! Yu-Na is happy with herself, and the announcers are practically unconscious with praise. Now, the score...

- The Korean Mother: "She needs to play within herself and just do the best she can instead of trying to do more than that."

- Everything about Mao at this moment is about intensity. Music, dress, facial expression, everything. Even her smile looks like it could kill someone.

- Triple axel, and another one. Damn amazing, no matter how many times the Korean sees it.

- Disaster! Mao's skate gets caught in the ice, and she can't jump the way she intended to. Now it's really over.

- Joannie Rochette's turn. Don't remember anything about this. Still delirious from TWENTY-THREE POINTS.

- Mirai Nagasu comes on. Again with the single-lines-for-eyes smile, but now a little scary how she could go there from a look of serious intensity in an instant, on command.

- Nagasu has some of the qualities that make Yu-Na great. Smooth, artistic, a little bit of magnetism. She finishes fourth, and looks happy. She will be great in Sochi. U.S.A.! U.S.A.!

- It's official, Yu-Na is the champion. Tears of joy from Yu-Na. High-five between the Korean and the Korean Mother. The Korean Fiancee's victory text message: "228.56= Gold medal for Yu-Na Kim. I've never been so happy to be a Kim!!!!"

- Medal ceremony. Rochette looks happy. Mao looks pissed. Looked like she did not even want to touch Yu-Na when they hugged.

- Congratulations Yu-Na, and thank you. You did all of us proud. 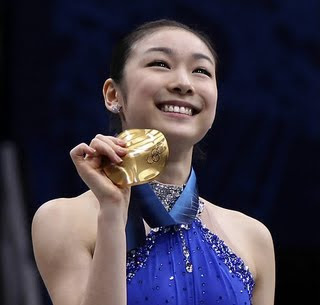 Got a question or comment for the Korean? Email away at askakorean@gmail.com.
Posted by T.K. (Ask a Korean!) at 6:45 PM