Ask A Korean! News: KFC - Not from Kentucky 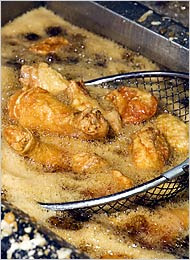 There are so many delicious Korean foods, but you probably wouldn't have guessed that fried chicken is one of them. Well, Korean fried chicken is really unlike any other in the world, and it's finally available in New York. The New York Times carried an article about Korean-style fried chicken places that are now popping up in New York, and it's currently the third most emailed article in the Food Section. Here is a snippet of the article:

"For crunch, American-style fried chicken relies on a thick, well-seasoned crust, often made even thicker by soaking the chicken pieces beforehand in buttermilk. When that crust is nubbly and evenly browned, and the chicken meat is cooked through, the chicken is sublime. But too often, the flesh is still raw when the crust is cooked, or the skin never cooks all the way through, leaving a flabby layer of skin between the meat and the crust.

Korean-style fried chicken is radically different, reflecting an Asian frying technique that renders out the fat in the skin, transforming it into a thin, crackly and almost transparent crust. (Chinese cooks call this “paper fried chicken.”) The chicken is unseasoned, barely dredged in very fine flour and then dipped into a thin batter before going into the fryer."

After the chicken is fried, Koreans either eat it plain or have it basted (not drenched!) with sweet and spicy garlic sauce. It was one of the Korean Family's favorite foods, and it's finally available in New York!

Naturally, the Korean and the Korean Girlfriend will visit one of them tonight. See you all at K-town.

Got a question or a comment for the Korean? Email away at askakorean@hotmail.com.
Posted by The Korean at 1:50 PM