Because without tradition, democracy is meaningless. 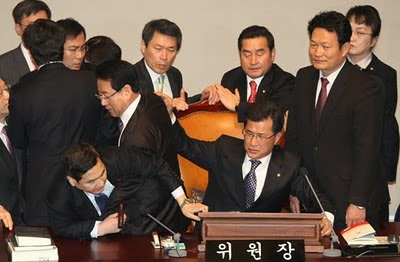 About 40 lawmakers from the main opposition Democratic Party occupied the conference room of the Budget and Account Committee of the National Assembly yesterday morning to protest the ruling Grand National Party’s plan to form a subcommittee on adjusting the budget bill.
(Photo and caption courtesy of Brian Deutsch and ROK Drop)
For those who are unfamiliar, fights break out in Korea's National Assembly almost every year, sometimes twice a year. They tend to happen most often in December, when there is a last push to pass/reject a piece of controversial legislation as the Assembly term draws to a close.

AAK!'s coverage of the 2007 fight can be found here. The 2008 fight, notable for its use of "weapons-grade" tools, here. In fact, this is not the first fight of 2009; the fight in July makes this one look like a picnic.

The best part is the play-by-play commentary.

Got a question or a comment for the Korean? Email away at askakorean@hotmail.com.
Posted by The Korean at 9:11 PM