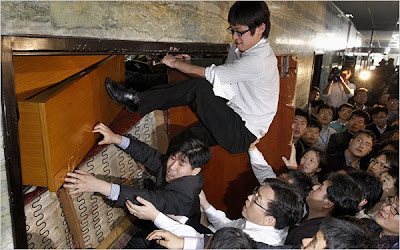 New York Times reports the yearly tradition of Korea's National Assembly, getting into fights. Right around this time last year AAK! reported a spectacular battle in the National Assembly involving, among other things, a cane and a phone. As 2008 is drawing to close, the Korean was actually wondering why a fight has not broken out yet. As usual, Korean politicians did not disappoint.

Some choice quotes from the Times article:

The parliamentary battle over a contentious free trade deal in South Korea led to a confrontation on Thursday in which opposition lawmakers used a sledgehammer to knock down the doors of a blockaded room in which a committee was discussing the agreement.

Television footage showed fire extinguishers being sprayed at the opposition lawmakers trying to get into the room . At least one person was shown bleeding from the face....

Thursday’s assault came after the opposition party had threatened to block the deal by using physical force if necessary. Fearing an attack, members of the foreign affairs committee, under control of the governing Grand National Party, had barricaded themselves inside the room as they met.

Security guards and aides from the governing party stood outside the barricaded doors, where scuffles broke out when a dozen opposition lawmakers showed up. The opposition lawmakers then used at least one sledgehammer and crowbars to tear through the doors, only to be thwarted by piles of furniture thrown up as a second line of defense.

The mayhem failed to prevent the pact from being formally introduced to the committee, a step in the process of bringing it to a full parliamentary vote.

Also, see a Korean article from Dong-A Ilbo here. The article also contains pretty sweet videos of door breaking down and fire extinguisher spraying. A separate Dong-A Ilbo article, in a sterile tone that may as well be discussing last night's baseball game, speaks of the involvement of "weapons-grade" tools such as a sledgehammer, a chain saw, a fire extinguisher, a crowbar, etc. The article notes that "While it was common to have a shoving match in the National Assembly due to the difference in opinions between the parties, it is very rare for such 'weapon-grade' tools were used."

The Korean urges the America's Congress to follow the example of Korean legislature. If Congress is going to be worthless, the least they can do is to provide yearly entertainment. America can add a creative twist to this yearly ritual. Say, the Iraqi shoe-thrower already gave a good example. Let thousand shoes rain upon Dick Cheney! Plus, the Korean is certain that raining shoes is Nancy Pelosi's dream. The Korean cannot see any downside to this proposal. Institute Fight Night Congress now!

Got a question or a comment for the Korean? Email away at askakorean@hotmail.com.
Posted by The Korean at 8:34 PM