The Schizophrenic Arts of Korea

As Korea has a hyper-competitive education system/society, are students actively discouraged from becoming musicians or artists (I mean real musicians. not the k-pop, look-good-but-can’t-sing-for-peanuts, populist kind,) and if so, what kind of person would pursue these activities in Korea?

Your instincts are on the right track. Traditionally, musicians or artists were not a venerated occupation in Korea at all. They formed the lowest of the social order, along with butchers and executioners.

However, it is important to note that this attitude does not indicate that traditional Korea was hostile to arts. It is quite the contrary. One of the essential qualities of the members of the yangban (= noblemen) class was the ability to write beautiful poetry and draw elegant black ink paintings, which were all part of higher learning along with broad knowledge of Chinese classics.

So it would be more appropriate to say that Koreans have a strong sense of “high” art and “low” art. For Koreans, anyone who wishes to be considered educated must have a general knowledge of the “high” arts. On the other hand, those who devote themselves full time to “low” arts are considered, well, low.

Such attitude persists to this day, except that the categories of “high” and “low” art have changed. “Low” art included new forms of pop culture, such as cartoons or pop music. Indeed, most Koreans did not consider pop musicians to be artists until around 15 years ago.

The interesting part is the new “high” arts in Korea. Guess what the most prominent form of new “high” art in Korea is? Fellow Koreans, what did all of you learn when you were children? That’s right – Classical music! Indeed, classical music has become the high art in Korea, as Chinese poetry and black ink painting went out of style. Since every Korean mother wishes her children to be educated, learning to play some classical music instrument has become an essential part of Korean childhood. The Korean himself had to learn piano, and violin is also quite common. Drawing and painting is also included the “high” art category, although to a lesser degree.

So let’s get to the answer of the last part of the question. Who are the people who pursue artistic activities in Korea? For “low” arts, mostly creative-minded people who did not do so well in 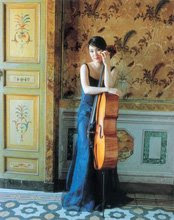 school. This trend has been changing in a major way recently, but even as late as 10 years ago, it was a big deal for someone who attended Seoul National University (= best college in Korea) to become a pop singer. Slightly earlier in time, there were some Korean pop singers who initially gained notoriety as “SNU graduates who can sing.” (For example, Jeong Seok-Won of 015B.)

What about “high” arts? Answer: every Korean, until s/he quits. Some quit early, like the Korean himself who quit in less than a year after throwing massive tantrums. Many Koreans keep it up until they reach college, when they major in something other than music. And a considerable number simply continues on, flooding world’s top conservatories. (Bonus points for anyone who can identify the talented cellist in the picture.)

Aside 1: the Korean recently took a violist to Cal alumni bar in order to watch college football. Upon entering and seeing the sea of black hairs and brown eyes, she said: “Oh, it’s just like Juilliard.”

Aside 2: when Margaret Cho held a show at Carnegie Hall, her opening joke was: “I am certain that I am the first Korean to stand here on the stage of Carnegie Hall without a violin in my hand.”
Got a question or a comment for the Korean? Email away at askakorean@hotmail.com.