SXSW: Notes from K-Pop Night Out

The Korean's first show was K-Pop Night Out, held at Elysium just a few hours after the Korean's arrival into Austin. Here are some notes and impressions from the show.

- I got to the venue about 30 minutes before the show began. The line looked like this. 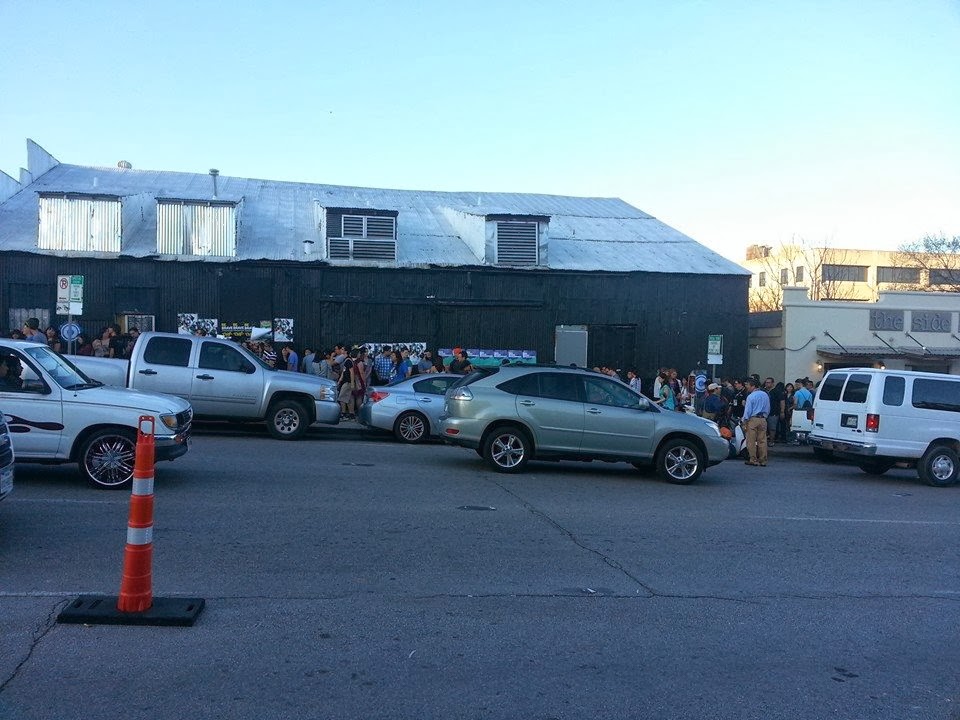 Luckily, because that line did not apply to SXSW badge holders, we walked right in. This was the venue. 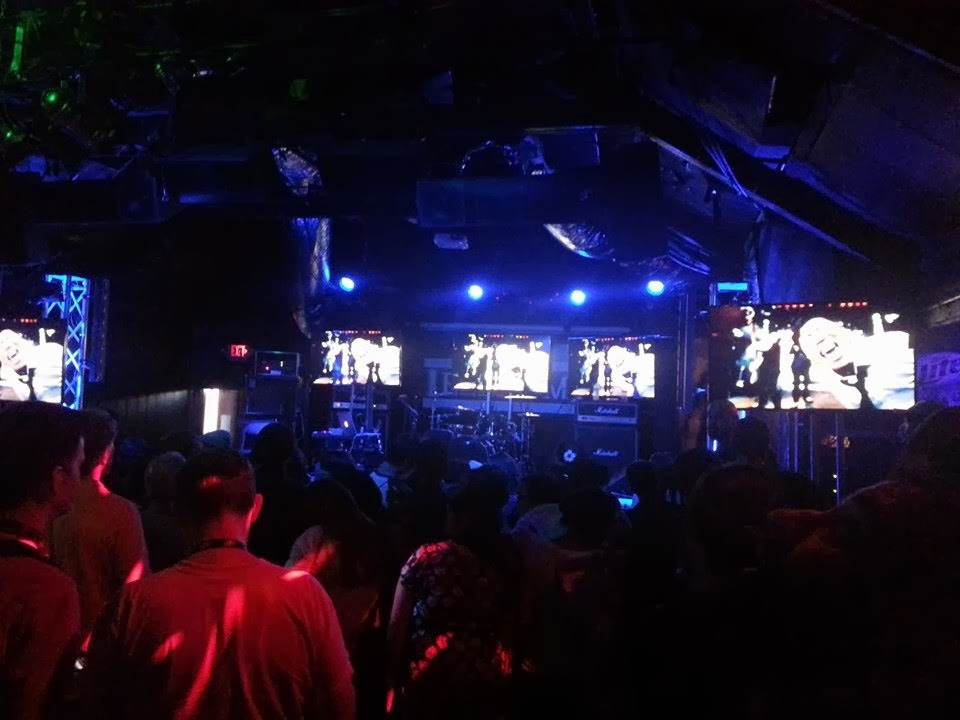 A good-sized space. It was a healthy-sized crowd--around 250 people, swelling and contracting throughout the night. The crowd was strongly Asian, but not exclusively so. The non-Asian contingent fluctuated between 20 to 50 percent throughout the night. The space was just the right size, with enough body heat to get oneself into the mood of things. In many ways, it was the ideal setting.

The screens cycled the music videos from the artists who were set to appear on the show. 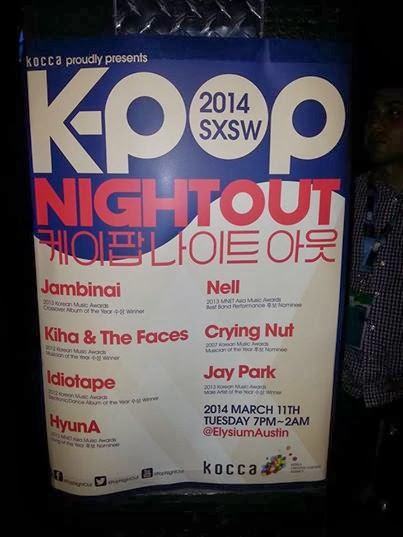 One snag, however, was that Kiha & the Faces [장기하와 얼굴들] was unable to make it to SXSW due to visa issues. Hollow Jan took their place instead.

Reviews of each performance after the jump.


- I find it interesting that the showcase is called "K-Pop Night Out," although there are only two (Jay Park and HyunA) who would fall under the narrow definition of "K-pop" (i.e. idol pop.) It lends further credence to the point that I have been consistently making: that "K-pop" must broadly mean "Korean pop music," which is much greater than "Korean idol pop music." I am encouraged by the crowd. It was only 7:30 p.m.; surely, they did not all come here just to watch HyunA doing stripper moves at 1:30 a.m.

- Jambinai comes on. There will be another post introducing this band more in depth, but Jambinai might be the most unique band in Korean indie scene. The three members play guitar, geomungo [거문고] and haegeum [해금], the last two being traditional Korean instruments. Traditional Korean music meets rock 'n roll.

Unfortunately, the sound system did not cooperate, giving a lot of feedback and annoying extra noise. But Jambinai soldiered on, and the crowd responded positively.

- Nell is next. I absolutely love Nell, but there is no other way to say this: Nell had a bad show. Nell's showcase was mostly made up of songs from their latest album, which was not reviewed particularly well. I have not yet listened to the latest album, but I am inclined to agree with the reviews after hearing Nell perform. A 13-year-old band with five regular albums (seven if one counts pre-debut albums) need to explore the new frontier. Instead, Nell ends up sounding like a slightly more serious CN Blue. Not a good thing.

To be fair to Nell, the sound system continued to be uncooperative. Kim Jong-wan [김종완], Nell's front man, had to stop the performance between songs to keep tinkering with the sound balance. Nell's meticulousness with their sound is well known, but this was one of the instances in which it would have been better to simply perform rather than to dither.

(EDIT 3/13/2014:  I made a mistake about Nell's set. Other than Ocean of Light, Nell's performance was mostly from their previous albums. I made the mistake because I was interviewing Jambinai during the later part of Nell's set, and I could not focus on the music. I stand by the overall point that Nell had a bad show. At least in the first 10 minutes of the set, I did not hear the sound that I expected from them. But my apologies about the factual error. I am new at this covering-concerts gig; I will do better next time.)

- Hollow Jan comes on. They are beginning with a disadvantage: they were a last-minute stand-in for Kiha & the Faces, whose folksy style is very different from Hollaw Jan's. For those who came to the showcase expecting the likes of Jay Park and HyunA, Hollow Jan's screamo rock must have been a shock to the system.

As they always do, Hollow Jan exploded on stage. About half of the crowd was stunned and scared. But surprisingly, the other half of the crowd LOVED them. After one of the songs, one guy bellowed: "THAT WAS AWESOME!!!" Numerous banging heads were seen.

- Crowd became visibly excited as Crying Nut was going through sound check. It has been more than a decade since I have seen Crying Nut live. In the intervening decade, Crying Nut went from a merry band of youngsters to the consummate professionals. Crying Nut was playing their second SXSW festival, and the experience showed. The band's interaction with the crowd--speaking the right phrase in English, inducing audience participation, high-fiving the audience at the right moment--was natural and flawless. If any band could represent Korea's rock 'n roll, it is this one.

- Went to the restroom during intermission. Was almost sure that the heavily tattooed fella in front of the urinal next to mine was Jay Park.

- In terms of audience interaction, Idiotape was the polar opposite of Crying Nut. The band got up there, and did not speak a word. Not even the perfunctory, "Hello, we are Idiotape." Instead, they open with 12 minutes of electronica, only taking three-second breaks as they moved onto the next song, then the next. For over 40 minutes, Idiotape only played music, not saying a single word.

And the crowd went wild. Spontaneous dance party broke out in different corners of the venue. Turns out, Idiotape had the best clubbing music among all the bands performing for the showcase. Somehow, a concentration of hot girls emerged in front of me, and began losing themselves in the music. Idiotape mixed in their version of Beastie Boys' Sabotage, which took the show to another level.

- In the intermission, I feel that the crowd has changed significantly. It was younger, and more screamy. Burly guys appeared in front of the stage, lest a fan should jump onto it. The space between people got a lot tighter.

The crowd suddenly became restless. I looked up to the direction of the camera phone, and there she was. Lady Gaga was in the sound booth, preparing to check out the next acts. Which made me face up to the unpleasant reality: although the showcase featured five rock and electronica musicians from Korea, the real show was about the two K-pop acts coming up next.

- Jay Park comes on, sounding like a Korean love child between Macklemore and Justin Bieber. He first appears with baggy jeans and jacket, and performed a slow-moving strip tease over the next 40 minutes, eventually revealing his chiseled and tattooed torso. Camera phones were everywhere. The girls were dying with screams.

Jay Park is talented enough, and his presence was tolerable enough to this rock 'n roll fan. But apparently, Jay was starting a new record label called AOMG, and his crew was on the stage with him to be introduced to the crowd. And the crew--particularly one guy named Loco--was simply not ready for prime time. Every one of them had the shit-eating, "I'm-just-glad-to-be-here" grin on their face. Yes, I know Loco won Show Me the Money, the rap battle show on Mnet. I don't care. I like my artists with charisma, not "I-don't-belong-here-but-thanks-for-having-me" vibe. It was like watching Jesse's crew on Breaking Bad: a bunch of dregs following a half-decent leader.

- I thought I hate-watched enough performances in my life, but I never hate-watched as much as I hate-watched HyunA's set. It is looking increasingly clear that HyunA does not belong to the upper echelon of K-pop's idol market. The cream of the crop in Korea's idol pop eventually rise by finding their own voice and personality. Lee Hyo-ri did so; more recently, Ga-In is doing the same. In contrast, HyunA is exactly the same as she was two years ago: that is to say, generic.

This showed in HyunA's set. Sincerity is hard to fake on live stage, especially if one lip-synchs the entire set. HyunA made all the appropriate stripper moves, but they were not sexy. In fact, the girls in front of me who were dancing to Idiotape were incomparably sexier, because they were genuinely having a good time. HyunA was not; she was there for business, and that was all. It was a painful 30 minutes to endure. Even the crowd, who was completely ready to love HyunA, was not responding as enthusiastically as it could have.

All in all, K-Pop Night Out was a fantastic success. The venue was packed, people reacted enthusiastically, and the music was (for the most part) phenomenal. Great way to finish the first day at SXSW.

Got a question or a comment for the Korean? Email away at askakorean@gmail.com.
Posted by T.K. (Ask a Korean!) at 3:09 AM