How do You Grow Hair Quickly?

I've been an English teacher working here in Korea for 7 months. The other day I was casually remarking to a friend of mine about how quickly my hair grows and that it's almost a nuisance getting it cut every 3 weeks. She then said there's a Korean myth about people whose hair grows quickly but she wouldn't tell me exactly what it is. Do you know what she's talking about or is she just making it up?


She is not just making it up. In fact, she is being rather polite by not telling you.

Here is the myth in Korea about quickly growing hair -- thinking about sex all the time makes one's hair grow faster. Although not explicitly stated, this applies mostly to men. 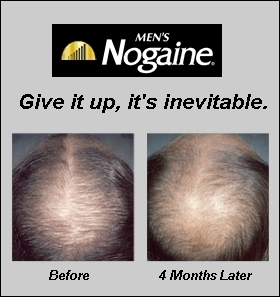 Instead of Nogaine, maybe just watch a lot of porn?
(source)
But how could it be possible that thinking about sex leads to hair growth? The only theory that has even a whiff of plausibility is that thinking about sex leads to increased level of testosterone, which leads to hair growth. At any rate, Koreans generally recognize this as a myth -- just something funny to say. If anyone tried to make a serious case for the myth, Koreans would also point out the countervailing myth: i.e., baldness is a sign of male sexual prowess.
Got a question or a comment for the Korean? Email away at askakorean@gmail.com.
Posted by T.K. (Ask a Korean!) at 10:40 PM