In almost every neighborhood, there are small areas set up where people go and fill up their cars with paint thinner. Now I can only assume that this is an illegal activity, as all of them have a large tarp or covering that they pull over to hid the car when a driver pulls in to puchase this stuff. But they are everywhere, and essentially out in the open, with advertisements on the street, etc.


So here are a few questions 1. I have heard that it is bad for the engine of a car to use this stuff as fuel, or to mix it with gasoline. What does it do to an engine that damages it? 2. As we all know the price of gasoline in Korea is not exactly cheap, so I can understand why some Koreans use this as an alternative, but why is it that since fuel suppliers and gas stations lose money over the use of paint thinner as fuel, why don't the gas companies and station owners do more to have this illegal practice stopped? 3. Is there any record of people being caught and/or fined for using this fuel? Do police do random sweeps of this kind of thing?

Robert definitely touched upon an interesting point: gasoline in Korea is incredibly expensive. The latest news says average gasoline price in gas stations nationwide in Korea is around 1750 won per liter.  Translated into dollars per gallon, that is equivalent to the eye-popping $5.83 per gallon. (Nationwide, America averages at a little less than $3 per gallon.) To think Americans were scared of the $4 gas a few years ago, right?

And this is not for the lack of supply -- in fact, on a per capita basis, Korea is among the world leaders in oil refining capacity among countries that do not produce any petroleum. Korea's high price of gasoline is almost purely the function of very, very high gasoline taxes. Gasoline taxes in Korea take up nearly 60 percent of per unit price in Korea. (America's gas taxes average at around 15 percent of per unit price.)

One of the recurring, universal truths about illegality is -- whenever there is a market inefficiency created by law, illegal activities bridge the inefficiency. This is precisely why no matter how much enforcement there is, illegal drugs and illegal immigration persist in America. The same applies to gas prices in Korea. Other than mixing in paint thinner into the gasoline, there are also fairly large black markets that deal tax-exempt gasoline distributed to farmers and fishermen, run by organized criminals. Instead of paint thinner, fuel for water heaters -- also petroleum, but not gasoline -- is also known to be mixed into gasoline to make the fuel cheaper. 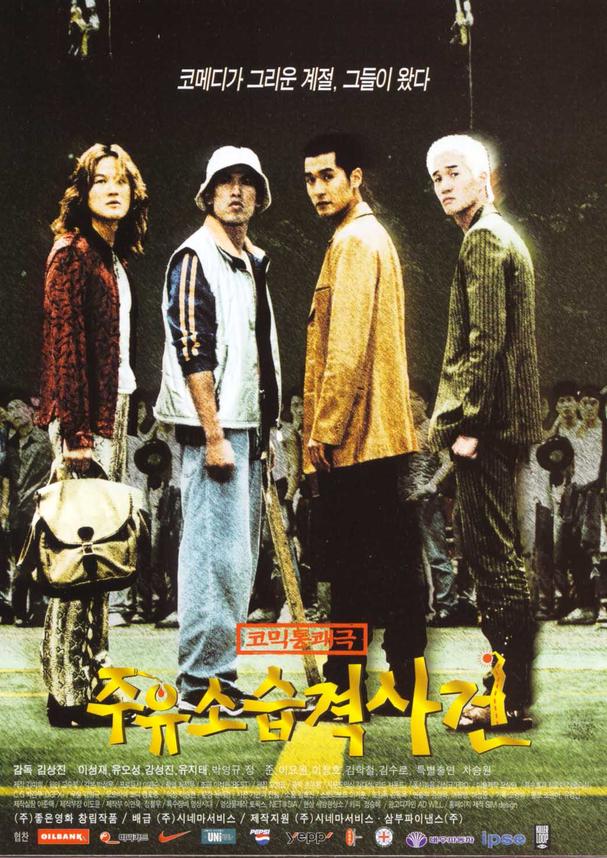 Poster for the movie Attack the Gas Station.
Just because the Korean can (and because it was a decent movie.)
(Source)﻿
So the first question is -- what does gasoline mixed with paint thinner do to your car? The Korean must tread carefully here, because if the Internet knows anything, it knows about cars. (And Simpsons episodes.) Write one wrong thing about cars, the car nerds swarm all over it like flying monkeys throwing feces. So. AS FAR AS THE KOREAN KNOWS, paint thinner damages the fuel injection system, and also corrodes the engine chamber. It also decreases the fuel efficiency because the fuel does not combust evenly.

Why don't gasoline companies do more to stop this practice? But oh, they do. Not the police, but the relevant regulatory inspectors definitely conduct random sweeps in deter this practice. In 2009, there were 4631 cases of apprehending quasi-gasoline, and apparently the practice is particularly concentrated in Daegu and other Gyeongsangbuk-do area. The worst part is that in some cases, gas stations surreptitiously mix in additives to their gasoline and lower their price. While a person knowingly buying a paint thinner-mixed gasoline deserves no sympathy for her wrecked car, it is a real nuisance when people simply think they got lucky with cheaper gas and get conned into pumping in bad fuel. But like all illegal acts, the presence of enforcement does not mean those acts do not happen. Time, tide and laws of economics -- those things don't change.

Got a question or a comment for the Korean? Email away at askakorean@gmail.com.
Posted by T.K. (Ask a Korean!) at 4:52 PM