Ask a Korean! News: South Koreans are Pissed Off at North Korea

The Korean previously mentioned that in the face of North Korean attacks, South Koreans generally tend to grit their teeth without necessarily expressing their frustration. But that is the general case -- and the exceptions to that general case are rather spectacular. For example, we have South Korean veteran's groups burning effigies of Kim Jong-Il and Kim Jong-Un in protest of the attacks: 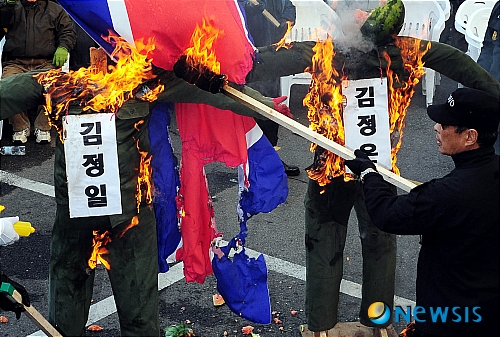 (Source)
But the reactions of Mr. Kim of Dongducheon-si was probably the best:

Around 6 p.m. on the 26th, at a restaurant in Dongducheon-si, Gyeonggi-do, 50-year-old Mr. Kim who owned the restaurant was drinking soju while watching TV. The television was showing news of North Korea's shelling of Yeonpyeong-do.

Mr. Kim, a former member of the special forces who lived near the Armistice Line, took this provocation personally. Mr. Kim, heartily drunk, decided that he would go to North Korea and kill Kim Jong-Il. He grabbed a knife from the restaurant and barged into a delivery truck standing on the street. Mr. Kim threatened the driver into abandoning the car and drove the stolen vehicle toward north.
5-6 kilometers away in Dongducheon-si, Gwang'am-dong, Mr. Kim caused a fender-bender. He abandoned the vehicle and ran away from the accident. Mr. Kim then got in a taxi and demanded to be taken to the Civilian Control Line [TK: the line of DMZ beyond which civilians cannot cross]. The taxi driver drove for 30 mintues, and let Mr. Kim out at Gyeonggi-do Yeoncheon-gun Gunnam-myeon Okgye-ri.
Mr. Kim wandered about for more than an hour, looking for the Civilian Control Line. Having been unable to stand the cold any longer, he snuck into a farmhouse nearby the sleep. Mr. Kim was discovered by the farmhouse owner the next morning, and turned himself in to the nearby police station. At the police station, Mr. Kim regretted action and said, "I did this because I was drunk and angry at North Korea's provocations," and added, "I myself think it was pretty pathetic."
On the 29th, Yeoncheon police station announced that Mr. Kim was released on his own recognizance on the charges of aggravated robbery.