Yesterday was the conclusion of the 18th meeting of separated families between North and South Korea. A bit of a background first -- during the division of Korea and Korean War, many families were separated. As of 2010, there were 120,000 registered South Koreans with separated families. 40,000 of them already passed away, and every year 3,000 more are passing away. Meetings between the separated families, arranged by the Red Cross Societies of both North and South Korea, happened for the first time in 1985, more than 30 years after the conclusion of Korean War. Since 2000, there have been a relatively regular annual meeting.

Below is the translation of an article depicting the scene of the conclusion of the meeting:


*                *                *
Old mother in her 90s, barely able to move her body, burst into tears as soon as seeing her daughter in her 70s, who was about to return to the north. As the 2-night, 3-day meeting of the separated families in Mt. Geumgang [TK: in North Korea] concluded, South Korean Ms. Kim Ye-Jeong, the oldest member at age 96, lamented, "What do we do, we will never see each other again." Ms. Kim required rest after receiving emergency aid for chest pain, but she did not leave the meeting place, hanging onto every last second. Ms. Woo Jeong-Hye (71) [TK: all numbers in parentheses are ages of the people] from the north gave a deep bow to her old mother, swallowing tears and said, "Please be healthy."

It was not only the Kim family. At the farewell meeting held in the morning of Nov. 1, sighs and laments of "When will we see each other again..." continued. The embraced family could not bear to let their hands go; their voices trembled at the prospect to separating with no promise of return. It was a sundering of families united by blood, a separation that could not be changed no matter how much anyone cried and grieved.

Mr. Go Bae-Il (62), who came from the United States to see Go Yoon-Seop (81), his father from the north, collapsed into tears while bowing. The three days with his father, met for the first time since age 3, was like a dream. The father who was listening to his son's wailing could not maintain his composure himself, and finally he had to be carried out by his family.

Mr. Lee Jong-Ryeol (90) of North Korea, who was a former soldier for the Republic of Korea military, and his son Mr. Lee Min-Gwan (61), shed the tears they had been holding back. The younger Lee buried his face on his wheelchair-bound father's lap, crying "Father, father, my father." 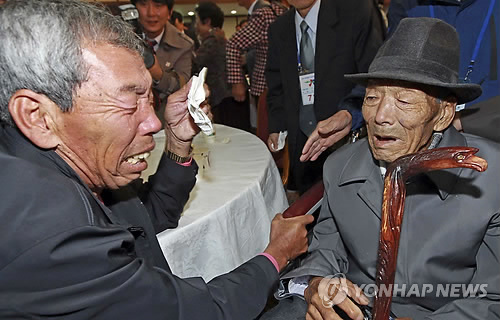 Mr. Lee Jong-Ryeol and Mr. Lee Min-Gwan
(Source)
Ms. Jeon Soon-sik (79) said to her older sister Soon-sim (84), who briefly recognized her despite suffering from Alzheimer's Disease, "Sister, please live long. Then we will see each other again."

Even for the meeting place turned into a sea of tears, the time did not stop. When the PA announced "10 minutes remaining for the farewell meeting," the few scattered laughs ceased completely. Finishing up the hour-long meeting, the South Korean families were at a loss as the bus carrying the North Korean families were leaving the meeting place. The South Korean families that met Ms. Woo Jeong-Hye from North Korea lifted up the 96-year-old mother so that the mother and daughter may hold hands for the last time through the window of the bus. And so ended the cruel meeting that did not allow the separated families to "really eat and sleep next to each other, only meeting for a moment just to separate again," as Mr. Lee Myeong-Guk of North Korea put it.

On Nov. 3 through 5, there will be a second meeting of the separated families involving 94 applicants from South Korea and 203 people from the north.

Mr. Yoo Jong-Ha, president of the Republic of Korea National Red Cross, in a press conference held on Oct. 31 in the Outer Geumgang Hotel at Mt. Geumgang, said: "We proposed to Mr. Choi Seong-Ik, Vice Chairman of the Central Committee of Red Cross Society of North Korea, that after these meetings, there should be a large-scale operation to determine the life and death of separated families." However, Mr. Yoo said, "This was just for the sake of making the time between meetings more useful, and there is no agreement yet." Mr. Yoo also said "North Koreans mentioned that there was a significant flood damage in Sinuiju as well as Wonsan area," and added, "We made clear that Red Cross's disaster relief is made without any condition."

Got a question or a comment for the Korean? Email away at askakorean@gmail.com.
Posted by T.K. (Ask a Korean!) at 11:48 PM