Below is a public service announcement about Korean American Film Festival in New York (KAFFNY): 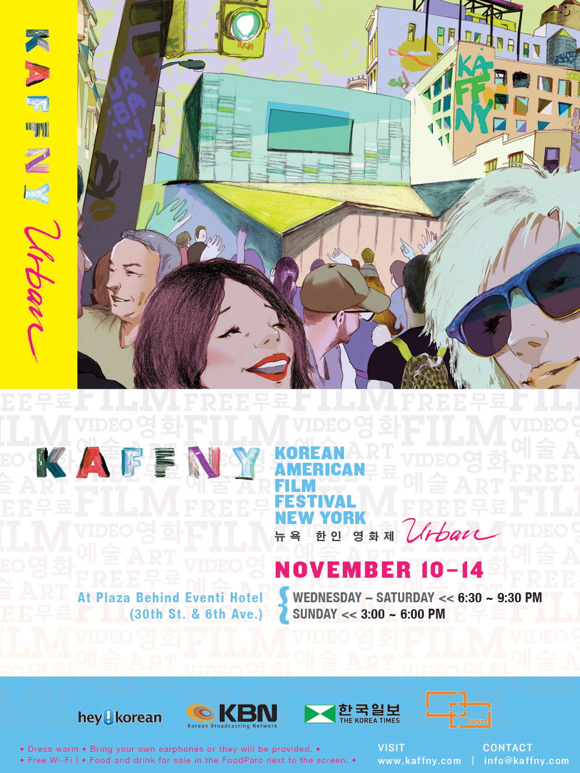 The KAFFNY Urban launch is scheduled to run from November 10 - November 13, 6:30 to 9:30pm, and November 14, 3:00 – 6:00pm. KAFFNY Urban will be held at the Big Screen Project, an innovative presentation model for film, video, live and interactive content, delivered via a one-of-a-kind 30-foot by 16.5-foot outdoor 1080P High Definition LED screen situated in the 15,000 square-foot public plaza behind the Eventi Hotel (6th Avenue between 29th and 30th streets). Audio will be delivered to audiences via transmitters and available earphones provided onsite. Tables and chairs are set up easy viewing in the public plaza. The screen is also viewable by various sections of the multi-use building, including the brand new FoodParc and Bar Basque restaurant (JD Carlisle is the developer of the entire complex which also includes luxury rental apartments on the higher floors).

KAFFNY Urban’s launch program contains over 15 hours of film, video, and art, generally geared towards promoting Korean-American and Korean filmmakers and artists in a dynamic urban context that connects local neighborhoods including Koreatown, Chelsea and Flatiron districts. Many of the artists and filmmakers will be on hand during the five-day event. Programming highlights include Korean American director Benson Lee’s international streetdance documentary Planet B-Boy (pre-theatrical 10-minute preview screened at KAFFNY 2008); a 2001 BBC Documentary about the 1966 North Korean World Cup team, The Game of Their Lives; a US premiere of the recently remastered 1978 North Korean film about that same team, Centre Forward; as well as premieres of short films from Indiestory and Amuse Film, the leading distributors of independent South Korean film. Select programming from past festivals will be screened.

Got a question or a comment for the Korean? Email away at askakorean@gmail.com.
Posted by T.K. (Ask a Korean!) at 10:26 PM