Readers of AAK! know how much the Korean loves Mr. Joo Seong-Ha, who writes Nambukstory. (Search for "nambuk" in this blog to find the collection of translated articles by Mr. Joo.) So when Joo wrote a post asking someone to translate, the Korean had to jump on it. Below is the post. (Link to the post in Korean.)

Do the Right Thing, No Matter How Much You Hate Kim Jong-Il
Even the world's leading press often publish articles that, to me, are difficult to accept. This month I saw two instances of that, and the perpetrators were the world-renowned Wall Street Journal (WSJ) and Time. Of course, these papers often carried this type of articles previously.

On the 8th, right after Bill Clinton visited Pyongyang and brought back the reporters, WSJ published an article that spoke of Kim Jong-Il's "kitsch" taste in art. [TK Note: here is the WSJ article.] The article says the picture of large waves in the VIP room in Baekhwawon shows Kim's kitsch taste in art.

This is the painting in question. 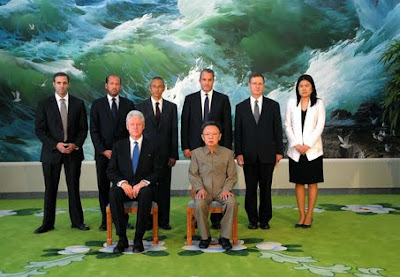 The article says the waves symbolizes the power of the dictator and the bird over the sea is remiscent of a natural paradise. Riiight. I felt it was absurd to interpret a seagull flying over a storm as a symbol for paradise.

That painting is known to be the work by Kim Seong-Geun, the people's artist in North Korea who specializes in painting waves. The title of that painting is "Waves of Chongseokjeong", and other renowned works of Kim include "Waves of Haegeumgang" and "Waves of Haechilbo". I do not have much knowledge in fine arts, but paintings of that type would fall under the realism movement.

But WSJ dared to call that painting kitsch. That angered me, because it felt like I became a kitsch person as well -- because I also have a painting of scenary that has a beach with waves hanging in my home. I look at that painting and think about my hometown near the sea. Is my taste kitsch too? Painter Kim also won an award at International H2O Color Competition in Rome -- the judges of that competition must have been kitsch too.

I also have something that I have a hard time understanding. Several years ago in America, I recall a so-called "painting" that had a dot on a white sheet of paper being sold for tens of millions of dollars at an auction. I could not understand why that painting was so expensive, but the true masterpiece was the explanation: "Do you know how feverishly the painter agonized to find the right place to put that dot on the paper?"

I don't know if the painter truly agonized, but to me the painting would not change at all whether or not the painter agonized or not. I wonder if WSJ views this type of "painting" as an example of elegant taste.

No matter how much one hates Kim Jong-Il, this isn't right. If WSJ satirized Hu Jintao that way, there would be a strong, immediate reaction: "Arrogance based on imperialistic ideas," "extension of white supermacist racism", etc. I also hate Kim Jong-Il, but I do not wish to see that type of article again.

Another is an article on Time magazine on the 14th. This weekly news magazine selected the ten worst dressers among world leaders. [TK note: article here] As expected, the number one worst dresser is Kim Jong-Il. The magazine assessed that the same khaki suit, large sunglasses and five-inch platform shoes to make the wearer appear taller is unusually out of style. 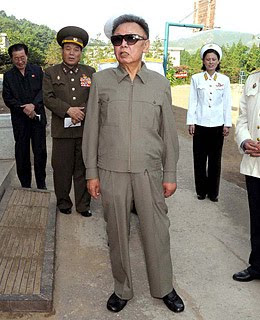 Let us take a look at the other 9 entries:

Pretty much the same as the list of world leaders that America hates. They are all either anti-American leftist leaders or dictators.

Fine, I understand hating them -- but faulting them on their dress is truly low, not becoming of Time magazine's prestige.

Kim Jong-Il's garb is, for him, a product of his agonizing thoughts. The jacket may not cover up much of the paunch, but everyone knows a suit would make the paunch look even more prominent.

I would like to see Time selecting the best dressers among political leaders. The leaders of capitalist countries like America, Britain and Japan always wear a suit -- it makes news when sometimes, they go without a tie and undo the top button on their shirt. I doubt Time would select that to be the best fashion sense.

I learned a while ago speaking with a reporter from the New York Times that the posts on my blog is being translated and circulated in websites in the U.S. I don't know who does that, but I am grateful that my unworthy writing is regarded highly. [TK note: No, thank you Mr. Joo for writing excellent posts all the time. The Korean wishes he could translate every single thing you write for your blog.]

The reason why I mention this is because if I had to choose one post in my blog to be translated and circulated in American websites, this one is it. If media wishes to criticize Kim Jong-Il, they must do so in a straightforward manner; this type of low blow would only generate negative reaction, leading to more loss than gain.

At any rate, how would Kim Jong-Il look if he wore a suit and a tie, without his platform shoes? Just thinking about it makes me laugh. That would really make him the worst dresser.

Got a question or a comment for the Korean? Email away at askakorean@hotmail.com.
Posted by The Korean at 10:38 PM