Here is an extremely interesting article from Dong-A Ilbo (albeit with questionable journalistic standard and near-total ignorance about America,) which somewhat ties into the tanning question and immigrant time warp.

If you don't know, "gyopo" is a Korean term for Koreans living outside of Korea. For the record, the Korean knows nothing about makeups (gyopo or otherwise,) which made the translation a little difficult.

"Why Do They Completely Change in America?": Truth about Gyopo Makeup

Wonder Girls, touring in the U.S.

In late 2007, figure skater Yuna Kim was featured as a cover model for International Figure Skating, a well-known figure skating magazine. The Korean fans were surprised at the cover, wondering if the cover model was really Kim because the makeup with dark complexion and exceesive eyeliner -- as if following the older figure skater Michelle Kwan -- was too awkward. However, American fans who saw the cover said Yuna Kim was very pretty. This sparked a heated debate on "gyopo makeup" among Korean fans, who were accustomed to young Yuna Kim's bright and light-spirited makeup.

Emphasized Hues on the Cheeks and Strong Eyeliners are Corny? 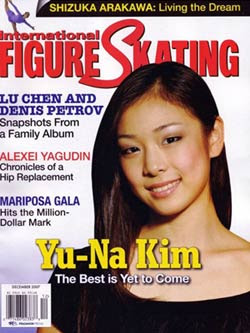 The makeup style of Wonder Girls, who are currently touring in the U.S., is also a popular Internet gossip fodder. The fashion and hair style reminescent of the movie Dream Girls, set in 1960s-70s, have been the same from Korea, and therefore did not create any controversy. But a controversy rose regarding the dark skin tone and complexion makeup, which looks like the makeup worn by singers in Itaewon (near the U.S. Army base) in the 1980s and is therefore considered corny. This is another rendition of "gyopo makeup" controversy, similar to Kim Yuna's case.

Gyopo makeup controversy also arose when Miss Koreas appeared in international stages. Miss Korea 2006 Honey Lee and Miss Korea 2007 Ji-Seon Lee, who showcased elegant beauty in Korea, appeared with darker makeup for Miss Universe competition. The makeup attract criticism from Korean fans, who said they should not win based on such non-Korean image.

How did gyopo makeup, which gets a relatively low mark in Korea, come about?

Beauty in Korea is Different From Beauty in America?

The origin of the term "gyopo makeup" is unclear, but fashion experts say the term slowly took root around 1990s. Gyopo in the term refers to the Korean immigrants in California, who take up a considerable percentage of Koreans living abroad.

Gyopo makeup boldly expresses eyes, nose and mouth, with a special emphasis on cheek bones. It also gives dark complexion, smokey eyeshadows and strong, perky lips. Other characteristics of gyopo makeup include strong impressions created by upturned corner of the eyes, and hair that gives the maximum-volume feel.

Prime examples include Chinese American newsanchor Connie Chung who appeared on ABC, or Korean Americans May Lee or Elena Cho of CNN.

As to the origin of gyopo makeup, the first explanation offered is that it was a natural result of adapting to the strong sun and open nature and culture of California. Ms. K (age 39) of Houston said, "I came to America about 10 years ago when natural makeup was in vogue in Korea, but I was surprised to see the dark circles around Korean American women." She added, "Longer the gyopo women have lived in America, more accepting they were with stronger makeup."

A number of Korean Americans said, "Asian women's faces are not very three-dimensional, so they intentionally use darker makeup to emphasize the cheek bone." They also explain that the makeup is darker because unlike Korea where light skin is preferred, America likes tanned complexion.

A reporter for Korean American daily newspaper based in Los Angeles, said, "At first, the strong makeup looked awkward, as if the trend went back to Korea in the 1980s. But because the climate as well as the culture are completely different from Korea, I just accept it as a natural consequence." In other words, the makeup methodology that developed as a result of adaptation to the locality's culture and environment should not be criticized as "corny". 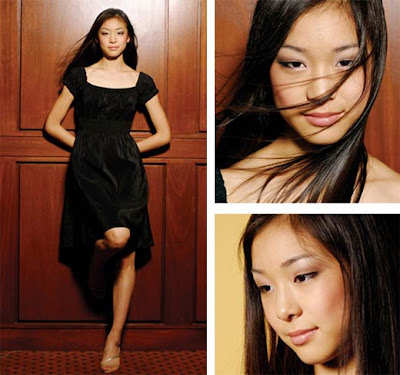 Pictures of Yuna Kim that created the "gyopo makeup" controversy

On the other hand, there is analysis that gyopo makeup responds to how white people of America views Asians.

Elle Korea, which reported Yuna Kim's gyopo makeup controversy in 2007, offered at that time that "gyopo-style makeup connects with the Asian women style preferred by white people of America." Citing examples of Disney movies such as "Mulan" or "Pochahontas", it explained that slanty eyes and strong cheek bones, relatively disfavored by Asian women, are loved in America as a typical Asian image.

Finally, there is an argument that the expression of "gyopo makeup" betrays the changed power relations between Korea and the Korean American society.

Choi Young-Il, a cultural analyst, offered, "In the past, America and Made-in-America mark were the symbols of the cutting edge of culture. But since 1990s, the views on America changed, and the younger generation's changed perspective and self-assurance are indirectly expressed in the term 'gyopo makeup'."

In other words, the expression of gyopo makeup appeared as the admiration for Korean Americans faded. Mr. Choi pointed out "The expression 'gyopo makeup' is problematic because it has a mocking connotation. There needs to be an effort to understand each other's culture on equal basis." 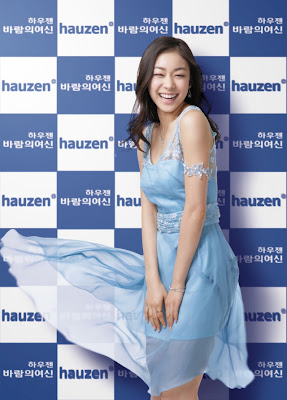 Got a question or a comment for the Korean? Email away at askakorean@hotmail.com.
Posted by The Korean at 7:52 PM