Here Comes the Sun -- Run Away!

I noticed many Korean women do not like to sunbathe, and I noticed that many of them often wear very wide brimmed hats, and avoid getting tan in general. Is having fair and light skin a big factor in beauty for many Korean women?

The Korean will even answer a follow-up question. Why do Korean beauty standards involve pearly white skin? Simple -- because dark skin means that you are one of the peasants, out in the field and working all day under the sun. Light skinned people are the nobility – they can afford to stay at home and out of the sun.

The fact that this attitude survived for so long is an indicator of how slowly people's frame of mind changes, even as the circumstances that surround those people change rapidly. Korea began industrializing in mid-1960s, and by 1970s Korea could no longer be called an agrarian society. By then the majority of the lower class of Korea no longer worked on the field, but worked in a factory indoors. To be sure, the factory workers had their own appellations to denote their low station in the society. But aversion to tanning is clearly based on the agricultural economy and field work. How long did Korea to take shed a paradigm based on its agrarian past?

Answer: between 30 and 40 years. Tanned face did not become an acceptable form of beauty until early 2000s, when this woman came along: 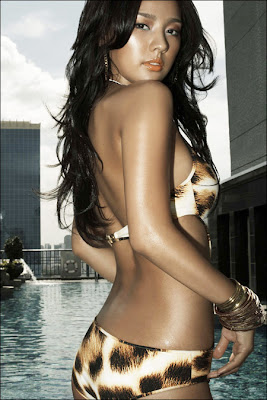 Her name is Lee Hyori, whose sheer force of hotness made Koreans accept that tanned skin could indeed be beautiful.

But aside from the delay in changing beauty standards in Korea, there is another level of delay that operates among Korean Americans, such as the ones that Jack saw in California. Simply put, Korean Americans have their own paradigm that either very slowly follows the paradigm of Koreans in Korea, or often does not follow at all. And the way beauty standards have been changing provides an interesting example of this phenomenon.

Take Hyori for example. For about a stretch of 3 to 5 years, she was the biggest star in Korean pop culture scene, about equivalent to Britney Spears' peak in terms of popularity and exposure. (Remember the stretch between around 1999-2002 when Spears was the only female celebrity who mattered?) Wherever you went in Korea, Hyori's (hot, hot, hot) images were plastered everywhere in the forms of TV shows, music videos and advertisements. An average Korean living in Korea, seeing such images, could slowly accept that tanned body can be beautiful as well.

There will be another time to more fully discuss the "immigrant time warp", but the Korean thought this was a great example. The Korean has found that understanding the immigrant time warp is most helpful to the second generation Korean Americans who have a hard time understanding their parents. In most cases, they do not know that their parents think not just like Koreans, but more like Koreans of the 1970s (or whenever they immigrated). But more discussion on this later.