Today marks a momentous day -- the Korean will step out of his anonymity, in anticipation of his upcoming book deal with Random House.

My name is David Bryant. As you might have guessed from my name, I am actually not an ethnic Korean. From the looks, I look about as white as any corn-fed Midwestern 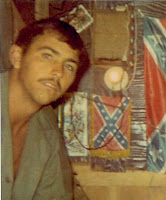 boy. However, I did spend most of my life in Korea. I was born in Camp Humphries in Pyeongtaek, near Seoul, and went up to one year of high school in Korea. After attending college and journalism school, I am currently a staff writer for Time Out New York magazine. Here is a not-particularly-flattering picture of me at a Museum of Confederacy in Huntsville, Alabama.

But onto the good news! Thanks to all of your support, Ask A Korean! is going off-line and onto a collection of paper. We just finalized a book deal with Random House, and the book is due to hit the stores at the end of the year. I gotta say, it's nice to have a dream come true. It is also nice to not speak like a dumb pro wrestler by staying in the third person voice all the time. I was getting really tired to writing "the Korean's" when I really wanted to just say "my".

Once again, thank you all for reading. It could not have happened without you guys.

Got a question or a comment for the Korean? Email away at askakorean@hotmail.com.
Posted by The Korean at 1:34 PM