I just found out that my boss's mother has died in Korea. I've heard that it's customary to give money to the person who has lost a loved one, but I've known my boss for 2 years and it just seems insensitive to me if all I did was give him some money. Why do Koreans do that? Is there something else that I can do that is more personal?

It may seem insensitive, but Koreans are practical folks. Sad fact of life, or the end thereof, is that funerals cost money. The nice thing to do would be to help out with the costs. Of course, nothing stops people from doing things more personal, like writing cards or helping the funeral preparation. But as far as Korean folks are concerned, money in a white envelope that says 謹弔 is enough. (The Chinese characters roughly mean “I am sorry for your loss.”)

A side effect of the custom of giving money (the money itself is called bujo) is that the family of the deceased should only give the official notice of the funeral (called bugo) to those close to the deceased and the family. Because those who received the notice is expected to attend the funeral and give money, it is bad manners to give the notice to mere acquaintances.

Korean funerals generally last three days. When a person dies, first the body is set in a straight position and covered in a white sheet. Then it is put behind a partition. In front of the partition, a small table is set up with a photo of the deceased and incenses. Then the person’s death is announced. Official notice of the funeral is sent out, and a sign is hung on the front door of the house.

First son of the deceased assumes the role of sangju, basically the master of ceremonies. Traditionally the sangju would wear clothes and hat made out of hemp, but nowadays they simply wear a black suit and the hemp hat. The relatives of the dead are also sup 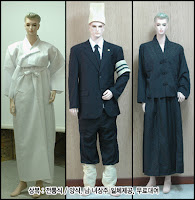 posed to wear the hemp clothes, but that part is now generally omitted. Both sangju and the relatives are supposed to wear a black ribbon either on the chest or on an arm, but now only sangju wears it. (Picture came from a Korean funeral house, which advertises that it rents the traditional garb.)

On the second day, sangju arranges for cleaning of the body, which is usually done at a funeral home. Koreans don’t embalm the dead. The body is cleaned and dressed – there is a traditional garb for the dead, but suits are commonplace in modern Korea.

After the body is dressed, it is put in a casket. The casket is again set behind a partition or a black curtain, and a table with the photo of the deceased, candles, and incense is set up. A black ribbon is put on the photo at this time. Sangju sits next to the table on a coarse mat – the mat is coarse because sangju must atone for the sin of allowing his parent to die.

Then is the time for visitors. Visitors wear black suits as American mourners would. Mourners first light a stick of incense at the table, bow at the table, then sangju and the guest bow at each other. Traditionally sangju, as a sinner, is supposed to remain quiet for the entire proceeding, but now they are allowed to say brief thanking words to the guests. As they are leaving, visitors leave the envelop with money in a designated box.

On the morning of the third day, the casket leaves the house. Before it leaves, a short ceremony is held in the honor of the dead – if you were trying to find one ceremony called “funeral” in a Korean death ritual, this would be it. The personal history of the deceased is told, and people eulogize and offer incense.

Traditionally, sangju and his relatives carried the casket all the way to the burying ground, but now Koreans use a hearse. The casket is taken to a pre-arranged burial ground, which is near other family members' 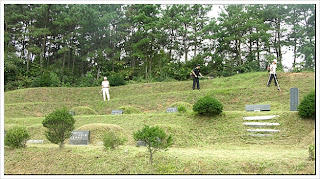 burial sites. (See picture.) Typically, an extended family owns a small mountain and sets up burial sites for the entire family, past, present and future. The Korean himself already knows where he will be buried when he dies. Believe it or not, the thought is somewhat comforting.

After the casket is lowered, sangju throws dirt on the casket three times. Then the grave is fully filled, and a little mound is built on top of the grave. The mound is then covered in grass. On the right bottom side of the mound, a small stone with the name of the dead is buried so that the grave can be identified even though the mound is eroded away. The tombstone is set up in front of the grave, and brief ceremony is held once again.

But technically, the official funeral is not over after 3 days. Sangju keeps wearing the black ribbon for 100 days; traditionally everyone who had to wear to hemp garb had to keep them on for 100 days, but that does not happen anymore. After 100 days, a memorial ceremony for the dead is held, and the funeral is finally over.

Got a question or comment for the Korean? Email away at askakorean@hotmail.com.
Posted by The Korean at 12:19 PM