Apparently after the Super Bowl, some people are up in arms about one particular commercial:


Here is the Korean's reaction to those people: Get the fuck over yourselves.

Making a fuss over this ad takes the focus away from the real issue of the ad: It sucks. It's dumb. It shows not a shred of originality that people have come to expect from a Super Bowl ad. Talking about the ad gives it a longer life than the 30 seconds it deserves.

Pandas are from China. There is no dispute about this. So why is it so weird to have Panda speaking Chinese accent? And if a cartoon Panda speaks in Chinese accent, why must we demand it to speak in grammatically correct, complete sentences? No one whines when a leprechaun sings the grammatically incorrect sentence of "Catch me Lucky Charms, they're magically delicious!" in a decidedly un-masculine high pitch Irish accent. (The Korean has no way of truly knowing how good that Irish accent is, but he suspects that it is not much better than the pandas's Chinese accent.)

In fact, this little episode reveals more about Asian Americans themselves than the supposed racism in America. The Korean cannot help but notice that this type of episode tends to happen whenever there is a cartoon description of Asians on television or print media. (e.g. the Pat Oliphant cartoon incident a few years back.) The complaint is always the same too: the image invokes racially stereotypical caricatures. "How dare you depict my people with small eyes and yellow skins," they would say indignantly, "when I myself as well as many other Asians I know don't look anything like that caricature?"

News flash: No one looks like a caricature! How are cartoonists supposed to depict Asians when they need to depict Asians? Asians, as a race, have a distinctive look. We generally have yellow skin, small eyes, and small nose. We are on average shorter. Of course individually Asians all look different, and the Korean pointed it out repeatedly. But cartoonists are not portrait artists -- they are SUPPOSED to pick defining physical characteristics of a person to draw a representation of that person.

If Asians as a race share certain defining physical characteristics, how can a cartoonist 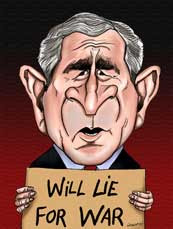 NOT use such characteristics to depict Asians? George W. Bush cannot complain that cartonnists repeatedly make his ears appear big and jutted forward. The president's ears are a little large, and the cartoonists exaggerate that feature to make the pictoral representation recognizable. But just because a cartoonist depicts and exaggerates a physical feature that is common to a race, he instantly becomes a racist?

The answer should be simple: they don't want to be seen as having small eyes and Asian accents. They are embarrassed of their own Asian characteristics, so they are outraged when someone points them out. It's the same affliction that drives Asian Americans into invisibility. They would rather blend in; they would rather be white, or black. Anything but Asian. They would rather not be different.

But not this Asian. The Korean, for one, is proud of his yellow skin, proud of his small, squinty eyes, and proud of his parents' accented, broken English that they built up from no English skill. Asian American live in a country in which the color of your skin matters the least in your success; a country where accented English speakers like Henry Kissinger and Arnold Schwartznegger have achieved dazzling success. Difference is nothing to be embarrassed about -- not in America.

So Asians, please just leave the stupid panda alone. There are plenty of issues that deserve your outrage other than a failed commercial.

Got a question or a comment for the Korean? Email away at askakorean@hotmail.com.
Posted by The Korean at 2:38 PM