Why do so many Koreans smoke? I have been around Asians my whole life, and amongst the Chinese, Vietnamese, Japanese, Filipino, and Koreans, the Koreans definately have the highest percentage of smokers.

It is absolutely true that Koreans smoke a lot. In the U.S., according to 1998 CDC survey, roughly a quarter of all American adults are smokers, with the number of men and women roughly similar. Asian Americans had the lowest percentage of smokers, with 13.7 percent.

The smoking trend for Koreans abroad is really just a by-product of the smoking trend in the mothership. So the proper question is why Korean males smoke so much. First factor is simply this: Korea is still not that far out of the times when EVERYONE smoked. U.S. had times like that, all the way until 1970s or so. Then the cancerous effects of smoking got publicized, and Americans, at that time rich enough to care for their health, quit smoking in droves.

One must remember that caring for one's health is a very rich-country-thing to do. After all, who has time to care for one's health when everyone has to work every waking hour to feed his/her family? Korea only became rich in the recent years, and sure enough, in the last five years or so there has been a massive public campaign to stop smoking. Governmental efforts followed as well, putting more and more places under no-smoking ordinances. In the last five years, all male relatives of the Korean who used to smoke quit, including the two Korean Uncles who had been smoking for decades. 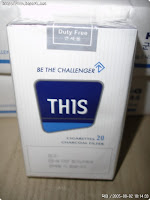 (The picture is a pack of This, the metaphysical cigarette that is one of the most popular in Korea. Notice the beautiful humor of subtle foblish.)

Another factor to consider is that Koreans spend a lot of time in extremely high-stress situations, and those situations tend to be suffered as a group. Smoking relieves stress, but even more importantly, chatting up while gathered to smoke relieves stress big time. Korean educational system is notoriously high-stress with cutthroat competition beginning from middle school -- the result is around 20 percent of high school students smoke.

After high school, the 2 to 3 years spent in the military is another high-stress situation suffered as a unit. After military, certain jobs operate as a stressful unit, encouraging smoking. (Surprisingly, such jobs include doctors, especially surgeons.) Almost all Korean smokers that the Korean knows picked up the habit during high school, military, or work, out of stress. Which leads the Korean to the thought that he has had, from the moment he landed at LAX -- boy, Americans have it so easy.