(Okay fine, this post is a day late. Last time the Korean checked, ain't nobody paying him to keep up the blog, so the posts will come when the Korean damn well pleases.)

You think Valentine's Day is commercialized? You should see what's going on in East Asia - as with cars and electronics, they took something from America and kicked it up a notch. The trend really started in Japan and spread over to Korea; the Korean is not sure if China or Taiwan is on board yet.

This is what goes on: on Valentine's Day, only women are supposed give gifts to men. What about men? Well, they have their own day on March 14th, called "White Day". (Can it sound more made-up? Seriously.) And the two days are not just about taking your significant other to dinner and buying things; the focus is actually more on revealing your secret crush. Hence, the quintessential Valentine's Day scene in a Japanese anime is in which a girl shily hands a boy a box of chocolate with a card on top, and running the hell away. (An aside: what about gay people? It's not fair that they only get one day while straight people get two. They should either make Gay Pride Day into a gift-giving occasion, or designate April 14th as "Purple Day". The Korean is certain that Japanese card company executives are already on this.)

One of the most amusing sights that the Korean has ever seen regularly occur on White Day, in front of Ewha University in Seoul. Ewha is a premier women's university, and men who are not employed by the school are not allowed to enter the school grounds (except a few extremely lucky souls, mostly exchange students from outside Korea.) This is because Ewha was established in the late 19th century when women getting any education was highly disapproved; no man (usually a father of a student) could enter the school in order to drag the student out and put her back to the kitchen.

The rule survives today, which lends to the sight. On White Day, outside of the front gate of Ewha, you can see litterally hundreds of young men, each carrying flowers and candies and awkwardly dressed in their best, waiting for their girlfriends to come out of the school. The most amusing thing is that across the street from the gate, there is a building that has a set of wide steps in front of it, like a platform. That platform is completely filled with men carrying flowers, standing on their tiptoes to get a better view of the gate, many of them on their cell phones talking with their girlfriends. The men themselves don't realize it, but to a passerby, the sight is incredibly hilarious. In fact, the group as a whole was given a nickname - 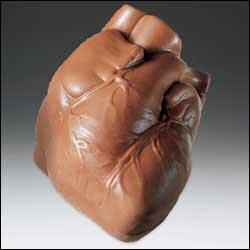 Well, it's not White Day yet, but this whole Valentine's Day thing is made up anyway, so who cares when the Korean gives gifts? So enjoy this gift from the Korean - a chocolate heart! You can't say Korean men aren't sweet.

-ADDENDUM: 02/16/2007 9:08 p.m.- The Korean hates these stupid holidays so he did not really want to elaborate more on this, but the two commenters forced his hand. So here is the full list of made-up holidays for every month. This is a direct translation from some random website (except 2/14 and 3/14, whose contents are abbreviated), and the Korean's editorials are marked separately. In other words, he's not making this up.

Jan. 14 - "Diary Day," the day on which you give a gift of diary to your significant other, to make new year's resolutions.

March 14 - White Day. Guys give candies. (the Korean: the word "candy" in Asia does not include chocolate; it only refers to sugary things.)

April 14 - "Black Day," the day on which single people get together to eat jja-jang-myeon (the Korean: noodles in black bean sauce; a "Chinese" food that is only available in Korea, derivative of Dan Dan Mien) together, in order to console one another and resolve to escape singledom.

May 14 - "Rose Day" for couples. Give roses to each other. "Yellow Day" for singles; unless one wears yellow and eats curry on this day, one cannot escape from singledom.

June 14 - "Kiss Day," the day on which couples who met on the 14th days kiss (the Korean: because they apprently kiss once a year.)

July 14 - "Silver Day," the day on which 1. couples exchange silver "promise" rings, and 2. couples introduce their significant other to their seonbae (the Korean: senior in school or work) or parents while having them pay for the date.

Aug. 14 - "Green Day," the day on which couples visit a forest and see greenery. (The Korean: whoever thought of this line of bullshit started to run out ideas at this point. See more below.)

Sept. 14 - "Music Day/Photo Day," the day on which couples visit a club or some place with music with friends in order to make their relationship public.

Oct. 14 - "Wine Day," the day on which couples have wine, because wine drinking is the thing to do in autumn.

Nov. 14 - "Orange Day/Movie Day," the day on which couples watch a movie together while having some orange juice. (the Korean: seriously, he is not making this up.)

Dec. 14 - "Hug Day," the day on which couples are allowed to hug each other. (The Korean: variation of theme from Kiss Day.)

Also, there are some miscellaneous days like Pepero Day, which is Nov. 11 (11/11). Pepero is a snack that is a knockoff of Japanese snack called Pocky; it's a thin, long stick of biscuit covered in chocolate. Apparently 11/11 looks like four Peperos.

The Korean was hesitant to put all that in because honestly, the Korean has never seen anyone actually keeping up with all the bullshit up there, except a few deranged young women. Valentine's Day and White Day are big. Black Day is somewhat known in reaction to the two couples days in two months, but no one ever takes that seriously; at best, it's a stupid excuse for single friends to get together and share their misery. (It would make a hilarious episode of Sex and the City, with the four women eating Chinese noodles.) Pepero Day is also somewhat known because the idea is kinda funny, and like commenter Simon said, because there is publicity from the company that makes the thing. (See, e.g., www.pepero.co.kr if you know how to read Korean.)

Other days are completely made up, and no Korean would actually know about them if they are asked. It's just a whole line of elaborate crap that little kids tend to get excited about, like Pokemon Cards. Now, let us all forget that we ever had this discussion. Ever.
Posted by The Korean at 12:55 PM