Yo Mama So Fat.... Wait, the Other Way Around


I am a Korean American woman, second generation. I don't mean to be stereotypical, or contribute a rude individual characteristic on a culture. But I have noticed something about 1st generation Korean women, especially ones that are a little older. They have no problem telling you or your children, that you/they are fat. Even if by "white American" standards, you or your children are not. This is especially true if you or your children are female. This is the behavior of many 1st Generation Korean women I've met, all a little older, at least 50 and up. My Korean drycleaner will look at my daughter and ask me, "Why is she so fat?" Then she'll look right at my daughter and directly ask, "Why are you so fat?" leading to tears of course. Same with the Korean waitress - ironically serving us Kalbee, as well as Korean churchgoers. You name it, they say it.

I find this strange because these same women grew up starving. They literally had no food growing up, so wouldn't being a little plump be a good thing? But clearly, they are not being complimentary, when they tell you "hey you, lose some weight!" and you barely even know who they are. In America, you might expect this name calling behavior from kids on the school play lot. But you would not expect it from a grown woman. Why is this?

First of all, Nuna would like to tell you something incredibly hurtful and offensive to you (and by calling myself Nuna, also give you honourary dangly bits):

YOU ARE FAT. FATTY MCFAT FAT. PHAAAAAAT. YO ASS IS SO HUGE IT HA' TWO POS'CODES, ONE FO' EACH CHEEK, AND YOUSE SEEN DA NILE RECENTLY OR SUMTHIN?

Nuna has obviously never seen you, met you in real life, and never knew of your kindheartedness, the fact that you graduated from an Ivy League university, or that your favourite pastime is volunteering at a local abandoned pet shelter.

So why does Nuna call you fat? It's because Nuna knows it rankles you. Heck, Nuna knows that if Nuna can't reach for any other insults, picking on the other person's appearance always does the trick. You're fat, your breath stinks, snaggletooth, monkey ears...Also, Nuna is going to tell you this: if you think insulting someone the first time you see them is something people left at the playground... pull the other one, it's got bells on.

Calling someone fat out of the blue is not just the work of Korean mothers. It is the work of all insecure individuals everywhere in the world.

When a person calls another person fat, what they are essentially doing is the human equivalent of beating their chests, ruffling their feathers, arching their back and hissing - showing animosity towards you to assert their rightful social rank of being higher than you, because they fell intimidated by you. In short, they're expecting you to act submissive, then run to the corner and cry. This is also why Korean mothers won't dare call a man they're fat - they're afraid of being pwned.

Which comes to the other point: why do they feel intimidated by a bit of meat on the bones and uh, not the impending asphyxiation of the world due to halitosis?

It's because Korean women, even this current generation, grew up in a country where photos are stuck on CVs, men won't get into the same elevator as a purportedly overweight woman, and clothing and shoe sizes are very restrictive. Nuna could never buy a bra in Korea because all the C cups were maternity bras. Being "fat" is simply unacceptable: to start off with, you would literally be unable to buy clothes that even looked mildly attractive. Most clothing lines only carry 1 "plus size" product, and you either take it or leave it.

[The Korean's note: Below is a picture of a fat Korean woman. Read this post for some context.] 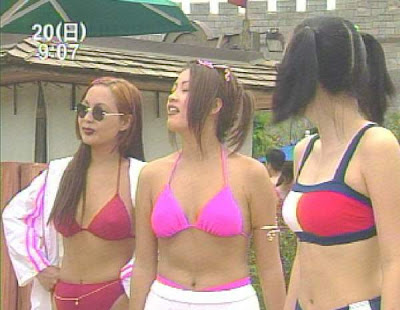 You know how Miss USA always says "world peace" when asked for their aspirations? Miss Koreas used to say "현모양처" -lit. "Wise Mother, Submissive Wife". It is jokingly said that every caring Korean Mother "fixes up" her daughter's face when she finishes junior high (national minimum mandatory level of education, though most finish at least senior high), and that even parents don't recognise a daughter's face if she forgets to "put it on" in the morning.

Heck, Nuna remembers, aaaages ago in Dong-A Ilbo, an opinion columnist who wrote about the "obesity epidemic" that was hitting women (back in 1995, no less!) and recounted his story of a girl he thought was pleasantly chubby, but the deluded wench kept on stuffing her face thinking he'd love her no matter what her weight, and then pleaded with him to take her back saying she'd lose all her weight. His final words on the subject? That he felt that he was scammed, and although he felt sympathetic to the woman, there was no way he was going to forgive her if it happened again. Nuna wishes that particular asswipe fell victim to a Nigerian scam later on, just so he knows what being scammed feels like, the mysogynist smear of smegma he is.

For Korean women, their entire person is judged on how much they like bending over backwards and paddled in the bare ass by The Man. It's all about what kind of husband you get, what kind of men you will attract, what will men think of you.

And here you are, Ms Fatty McFat Fat, boldly barging in with her natural Rubenesque Fertility Goddess figure and no makeup to be seen, demanding that everyone view her as a Person (or possibly Womyn) to be judged on her political views (in a country where wives are often browbeaten - brow optional - to vote the same guy the husband votes), education level and socio-economic status (i.e. being able to buy all that USDA prime and drink all that milk to get those mighty C cups).

How DARE you spit in their faces and tell them all they have looked up to and worked for in their lives is a LIE?

Nuna notes that in our mothers' times, girls used to fight by grabbing on to each other's hair and pulling their scalp as hard as they could. The first person to cry, of course, loses, and other girls used to keep bobbing down to check which girl's face teared up first. Think of it as that: You cry, you lose. Your choice is either to sit there and get your hair pulled out more till you cry, or you pull THEIR hair so hard they cry first.

So! Nuna would like to impart on those of us larger than life women (Nuna herself is an intimidating 172cm and 70kgs) that the best way is to insult them back: Nuna's favourite is *fake looud sneeze* "Oh I'm sorry, I'm allergic to cheap makeup brands." or "Yeah, I know I'm fat, and earn twice as much as your kids ever will 'cos they're crap at school" to perfect strangers, and to the people you're sure to meet again? "Oh Aunty, you're soooooo oooooooold with your quaint, ooooooold views. Who needs a man except to open jars and take out the garbage in this day and age?"

Got a question or a comment for the Korean? Email away at askakorean@hotmail.com.
Posted by The Korean at 1:10 PM