Many people would just not believe the Korean when he says Europe is more racist than America. Then the proofs come out.

Enjoy the photo of Spanish basketball team making slant-eyes in their photo-op for Olympics. This photo ran on a full page in the Spanish sports daily, Marca. 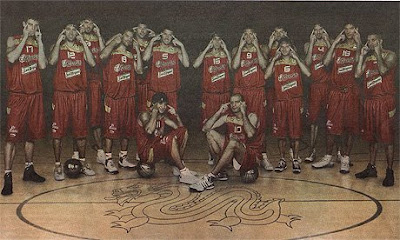 Somehow, the Korean's Pau Gasol jersey feels a bit tainted. But given the choke job he did during the NBA Finals, perhaps no more taint is possible.

-UPDATE: 8/12/08 8:21 p.m. EST- Sure enough, Spanish newspapers are defending this picture. For people who can't read Spanish, the title is "Does this picture seem racist to you?", and the first sentence reads: "What began as a simple graceful photo to wish luck to the Spanish basketball team in the Olympic Games has finished with accusations of racism and discrimination in the foreign press."

-UPDATE: 8/13/08 1:42 p.m. EST - This gets better and better. Jose Calderon, a member of the Spanish national team, says "We felt it was something appropriate, and that it would be interpreted as an affectionate gesture[.]" But wait, here comes the "I have yellow friends!" defense: "We have great respect for the Far East and its people, some of my best friends in Toronto are originally Chinese[.]"

Here is another reason why America is the least racist country in the world -- Americans understand what actions are racist.