A friend of mine, a former U.S. Marine, was stationed in Korea and he once asked me why all Korean guys are able to spin pens with their fingers. Unfortunately, I do not have this ability even though I’m Korean and wasn’t able to give him an answer. However, I did attempt to do the pen-spinning trick for him, but I nearly took out his eye.

Anyway, I have noticed that many of my Korean friends can do this and I’m wondering where it stems from. Is this a sign of our incredible finger dexterity (which I’m apparently lacking) or do we just get bored easily?

How dare you rip off the Korean’s name? We will have to settle the superiority of our Koreanness at some point – it will probably involve a drinking competition.

There are several types of pen-spinning tricks that young Koreans do. (It’s not just guys, by the way.) The Korean himself can only do the simplest one, the 360-degree turn. Other more difficult ones include the 180-degree turn and the climber. (The pen is initially held between middle and ring fingers, and the pen flips up into its normal position between index and middle fingers. 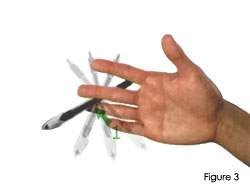 Double-climber is also possible, flipping up twice starting from ring and pinky fingers.)

A 360-degree turn is really primitive compared to the difficulty and the visual effect of a double climber, but the Korean was able to amaze a lot of Americans while he was mindlessly spinning his pen, thinking about something else. Then the Korean was surprised because Americans, no matter how they tried, couldn’t do the simplest spin.

Why is that? One possibility could be the famous “chopstick dexterity” theory. The theory was that because Asian Americans are trained to manipulate chopsticks since very young, they are good at precise digit controls. In fact, this is one of the theories of the 1980s that explained why Japan could make such amazingly precise electronics.

But this theory is just too hokey to be true. If that were true, what are the equivalent theories for precise German optics or precise Swiss watches? That good-quality beer actually helps hand-eye coordination?

No one knows for certain, but the Korean’s own theory is that pen-spinning is developed in the same way as chip-shuffling by poker players develop. On an average poker table at a casino, there would always be a select few who put on a show without playing any hands. They would get two or more stacks of chips and bring them up into a single tower, roll multiple chips from one hand to the other, and so on and so forth. How can they do it?

First, of course, they have digit dexterity (which one does not need to master chopsticks usage to have.) But more importantly, they are in a similar situation as young Koreans – namely, they have to sit at a table/desk for a very, very long time.

The Korean will devote a post to the life as a student in Korea, but for the purpose of this post it suffices to say that the student life in Korea is pretty miserable. Until very recently, Korean students went to school six days a week, including Saturdays. High school students still have classes on Saturday. Some high schools begin very early and finish extremely late. The school that the Korean went began at 7:30 a.m. and finished at 11 p.m. No joke. The school also averaged one suicide per year. In most cases, students of all levels attend private tutoring every day for hours.

All this means that Korean students spend an inordinate amount of time sitting in front of a desk, easily 10 hours a day at least. But human attention span has its limits, so there has to be different ways to entertain yourself. Some students doodle, some students pass notes, and some practice spinning a pen, the only thing that can legitimately be on the desk. (The Korean supposes there could be books on the desk as well, but spinning a book is too noticeable.)

By the way, as of 2008, the Korean has lived in America for more than 10 years. The Korean heard that the way schools are in Korea has undergone some drastic changes, but doesn’t have the full details yet. Any update would be more than welcome.