My boyfriend is half Korean and we’ve visited some of his relatives. On one occasion, there was a great deal of soju drinking and one of his cousins (who is 100% Korean) turned purple. As I was about to administer CPR, my boyfriend stopped me and told me that it was just Asian glow and that it happens to some Asians when they drink. Why does drinking cause Asian glow? Secondly, as it turns out, I LOVE soju. What are some good brands of soju that can be found in the States?

“Once you go Asian, you’ll never do Caucasian”

Glad you enjoyed yourself. Soju really is great. It's 21% so it goes down smoother than most other liquors; it fucks you up so fast because you just keep on drinking it. It is somewhat like 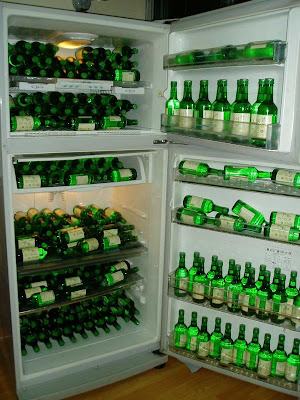 watered-down vodka, so you can mix it just like you would mix vodka (although soju traditionalists would be aghast at the idea.)

Soju is such a staple for Korean drinkers that they always come up with new and different types every few months. So it's hard to pick out what the best type is. The most "classic" type would be "cham iseul" from Jinro company. "Ipsaeju" is good if you like your liquor slighly sweet. Lately, the most popular type is "chum-churum".

(The picture is not the Korean's fridge, but it's not a bad depiction of what he would like.)

As to the cause of Asian glow, Wikipedia does a better job explaining the scientific bases than an amateur like the Korean can. (Link here.) If the big words confuse you, this is an easy way to understand it. Basically, many Asians lack the capacity to process a certain portion of alcohol, which manifests itself in reddened face. Although the Wikipedia article describes a lot of scary symptoms like "dizziness, nausea, headaches, an increased pulse, occasional extreme drowsiness, and occasional skin swelling and itchiness", most of these things are just symptoms of drunkenness. Generally, how red an Asian gets has no relation to how drunk he is.

(Here is a shout-out to Margaret Cho, in the form of one of her jokes: "Being an Asian is tough, because you could be at a party, and this ditzy girl could come up to you and ask, 'oh, are you sunburned?' And I have to say, 'No, I'm fucked up.'")

Asian glow is not the only physical thing that manifests predominantly with Asians. Many Asians are lactose intolerant, condemned to paying extra for Lactaid milk, or having the shits all day for having a bowl of cereal. The Korean himself has both Asian glow and lactose intolerance -- another reason why the Korean is a such a representative Asian, deserving to write columns like this.