(Disclosure:  I received a review copy of the book, and Frank and I met in person.) 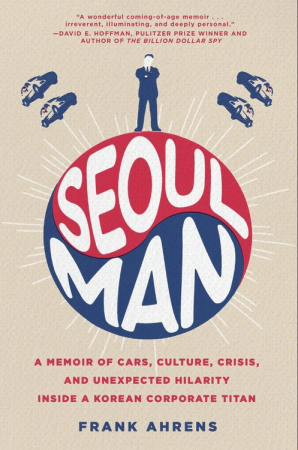 Hyundai Motor, of South Korea, is the world's fourth largest automobile manufacturer by the number of vehicles manufactured. The foregoing sentence is simultaneously mundane and incredible. Mundane, because it is such an obvious fact of life that is clearly visible to us. Hyundai and Kia cars are a common sight no matter where you live in the world--Asia, Europe, North America, South America, or Africa.

Yet it is also incredible, when you consider the history of the companies with which Hyundai rubs its shoulders. Ford Motor Company was founded in 1903 in the United States, which was then already the world's foremost economy by a wide margin. Renault was founded in 1899 in France. Fiat, also in 1899 in Italy. Hyundai, in contrast, was founded in 1963, when South Korea's per capita GDP was less than $150. Yet today, Hyundai outsells all of Ford, Fiat and Renault. In fact, Hyundai manufactures more cars than Fiat and Renault combined.

The story of Hyundai's growth is commonly told in tandem with the account of the marvelous growth that South Korea experienced post-Korean War. But the less frequently told part of the story is that, actually, the story has two stages. South Korea and its stalwart corporations reached middle-income by mid-1990s. The country was prosperous, but was not exactly world-leading. For much the 1990s, South Korea was one of the mass of countries that did not attract much attention--not poor and starving enough to arouse humanitarian concerns, and not rich or glamorous enough to inspire admiration.

But since the late 1990s, South Korea's corporations--at least those that survived the painful adjustment occasioned by the East Asian Financial Crisis in 1997--went to another level. Rather than being stuck at the "middle income trap," South Korea hit escape velocity. Its foremost corporations rose to the level reserved for the world's very best. Today, Samsung Electronics is the only meaningful challenger to Apple's iPhone juggernaut, and Hyundai only trails Toyota and Volkswagen in the number of cars manufactured per year. (Hyundai also trails General Motors if you include the production by SAIC, GM's Chinese joint venture.)

This part of South Korea's story deserves to be told more. Marginal improvement always gets progressively more difficult. Seeing from the ground level, the gap between "rudimentary" and "pretty good" may seem greater than the same between "pretty good" and "among the best." The differential in skill between hoopers at the local playground and a bench warmer for an NBA team is much greater than the differential between the bench warmer and an NBA starter, and much, much greater than that between an NBA starter and the likes of Lebron James, Russell Westbrook, Kevin Durant and Kawhi Leonard. But the effort it takes to go from an NBA starter to an MVP-caliber player is no less than the effort it takes for a regular person to become an NBA bench warmer. In fact, "effort" might not even be the right word, for it implies the continuation of the same path, only with more intensity. Often, it requires a complete re-definition of self for a player to make the leap and reach the next level.

Same is true with Hyundai. Hyundai Motor could have been another Skoda Auto or Tata Motors--a solid carmaker that does well enough domestically or within its region--and it still would have been considered a success. But Hyundai did much better. How? Frank Ahrens answers that question in his book Seoul Man, which makes it a unique read among books about Korea in English.


Early on in the book, we learn that Ahrens had been a journalist for the Washington Post for 18 years when he decided to make a career change. His wife's new job as a State Department official took his sights abroad--to Seoul, as a public relations executive for Hyundai Motor. Ahrens would be one of the very few non-Koreans who worked for Hyundai Motor, and the only non-Korean executive. Ahrens had never lived outside of the United States, never visited Korea, and spoke no Korean. When he lands in Korea, he finds the local customs (such as heavy soju drinking) confusing and bewildering.

Eye rolls. This story has been written a thousand times, mostly badly, by thousands of Western people visiting Asia for the first time. If you had been reading blog posts about Korea ten years ago (like I was,) this is all the blog posts you ever read--clever enough bits of writing with a limited perspective that end up being incomplete or misleading, all in the same way.

But like his would-be employer, Ahrens soon escapes this mediocrity by astutely noticing a parallel among South Korea, Hyundai, and his own life. He notes that all three were going through a mid-life crisis of some sort. South Korea was escaping the middle income trap, but not without costs to its people. Hyundai needed to make the next step to become not only a global brand, but also a desirable luxury brand. And Ahrens himself needed to adjust to a newly married life, in a new country, in a new job that he never performed before.

This ends up making an excellent story. Hyundai Motor in Ahrens' story is not an fresh whipper-snapper trying to join the pros. It is a young Michael Jordan, still not entirely in control of all of his abilities, trying to win his first championship. We learn that during Ahrens' tenure, Hyundai applied the gorgeous "fluidic sculpture" design to its Elantra and Sonata sedans, making Hyundai desirable for its design rather than its price point. We learn about Hyundai's incredibly audacious plan to make themselves into the next Audi, taking its entire brand upmarket rather than separating out a "luxury" line like Toyota did with Lexus and Honda with Acura. As this type of story is not widely circulated beyond trade magazines, Ahrens is making a valuable contribution to the library of books about Korea in English, especially because Ahrens' writing style makes Seoul Man a breezy read.

Set against this narrative, the stories about Ahrens himself and his family are nice reliefs. For the most part, this part of the book is not really instructive for a non-Korean person trying to begin a new life in Korea. Because of his wife's job, Ahrens mostly lives in the U.S. military base in the middle of Seoul in a house given to him. (He eventually moves out of the base when his wife is transferred to Indonesia.) There is no immigrant story in Seoul Man, where the new arrival must overcome the vagaries of a new housing market operating in a foreign language. But the Ahrenses are likable people, and you end up enjoying their story of adjustment into Korea. Particularly valuable is the account of Ahrens trying to adjust into Hyundai's corporate culture, as more non-Korean executives will undoubtedly join Korean corporations in the future.

Now, the bad part. In the middle of Seoul Man--specifically, in Chapters 6 through 11, for about 70 pages--Ahrens attempts to play the role of an amateur historian-cum-anthropologist. He goes through the stiff rules of Confucianism, the social graces that rely on non-verbal cues, Admiral Yi Sun-sin, North Korea, and more. It is not the worst exposition of Korean history and culture I've ever read--nothing is explicitly wrong per se--but that only means I read a lot of shitty writings about Korea.

To his credit, Ahrens steers clear from the worst forms of culturalism. But the book would have improved if these chapters were left off. There was no need for Seoul Man to be a "brief introduction of South Korean history and culture"--70 pages is not enough space for that, and the world already has Daniel Tudor's Korea: the Impossible Country. (To be sure, I found even Tudor's book to lapse into cultural essentialism at times, especially when it discusses Confucianism.) The space that these chapters took up was a missed opportunity to talk more about the best story that Seoul Man could offer: the one about cars. There are many more angles about Korea's automobile industry that the book could have explored, such as: how did Hyundai Motor approach the South Korean domestic market? How did the competitors react to Hyundai's rise from an okay brand to a world-beating one? What did the non-Korean auto brands think about selling their cars in Korea? These stories could be told in the context of, say, South Korean consumer behavior, which would have given a ground-level perspective of how Korean society was changing into a more mature one.

This should not dissuade you from reading Seoul Man, however. There are not that many books about South Korea in English to begin with, and I cannot think of any other book in English that observes the granules of how Korea went from a developing country to an advanced country. (If I stretched the boundaries very far, Mark Russell's Pop Goes Korea might qualify, in that Russell discusses the growth of Korean pop culture from a local knock-off to a world-leading phenomenon.) Not even Koreans themselves discuss all that much about how Korea went to a whole new level in the last 20 years--perhaps because they were too much in the thick of it to notice. To fill the gap of knowledge about the most recent part of the story of South Korea's rise, Seoul Man is well worth your time.

Got a question or a comment for the Korean? Email away at askakorean@gmail.com.
Posted by T.K. (Ask a Korean!) at 11:49 PM