If there were a world rock band Olympics, Crying Nut would probably be the captain of Team Korea. Formed in 1995, the first punk rock band of Korea has maintained the same membership for nearly two decades. In the interim, the band preserved its youthful, explosive energy while becoming veterans of international tours.

The Korean met Crying Nut at their hotel. The interview was conducted in Korean; the translation was the Korean's own.

TK:  Please say hello to everyone.

TK:  Please introduce Crying Nut for those who don't know you yet. How did you come to form the band?

Han:  The four of us [except Kim] were all friends since elementary school, so we always played together. We met In-soo in 1995. He was a DJ at the time. We formed Crying Nut together then. We are Korea's first punk rock band. We have seven regular albums so far. And we go anywhere there is a good live stage to perform on.

Kim:  We go anywhere we can drink.

TK:  This is your second SXSW. How is it different from the first time?

Lee SM:  We had a great time when we first came here! It was amazing to see a city full of rock music. I think we felt the pressure that we should really do well then. This time, we just want to have fun.

TK:  What did you think about the audience reaction last night, from K-Pop Night Out?

Lee SM:  We were surprised by the enthusiasm. It was moving.

Park:  We are world stars.

Kim:  But you could totally tell the part of the crowd that was there for Jay Park, another part that came for HyunA.

TK:  Crying Nut is one of the oldest continuing rock bands in Korea. How do you think Crying Nut's music evolved over time?

Han:  We are like bibimbap. We began as punk rock, but every one of us has a different taste. We blend them all in and create our music.

Lee SH:  We were probably more rebellious at first. Now I think we became more romantic.

Kim:  I recall seeing a 70-year-old film director receiving a lifetime achievement award, and saying in his speech that he still doesn't really know much about movies. That's how I feel about music.


TK:  Who would you call your influences?

Lee SM:  There are too many; we can't list them all. We listened to a lot of alternative at first. Before that, heavy metal.

Park:  I like funny bands. There were some Mexican bands here at SXSW who played with the luchador masks on. They were funny as hell. Their music was shit though.

TK:  On the other side of the ledger, do you see your influence over Korean bands that came after you?

Han:  We were probably a terrible influence. When we were playing at Club Drug [in 1995], we saw all these high school kids listening to our music. Later, we saw them all forming bands and playing music. Of course they all played different kinds of music, but all the punk rock bands learned from us. No Brain learned from us, too. [TK Note: this is quite a statement, because No Brain began playing at Club Drug around the same time Crying Nut began.]

Lee SM:  Regardless of what music they play, I do feel that the later bands look up to us because we were able to stay with the same members for so long.

TK:  In your long career, what changes have you seen at the Hongdae scene?

Lee SM:  Now there is a huge diversity in music, and the quantity of it increased a lot too. When we started out, there were only so many genres of music.

Lee SH:  There is a different mentality behind it also. When we started, there was this weird pride about not appearing television, not trying to promote. You were a traitor if you showed up on TV. Now it is just normal for bands to do whatever they can to promote themselves. And of course, that's just the normal way of doing things.

TK:  As Korea's premier rock band, do you have any thoughts on how the word "K-pop" is used in the international market?

Kim:  I think the definition will change over time, but frankly I don't care that much. Things change when they cross over to a different place. A lot of these smaller differentiations in musical genre are about American and British music; they don't end up being applicable in Korean setting. So calling some Korean music "K-pop" but not others doesn't really make sense. I think "K-pop" is just pop music of Korea.

TK:  Do you plan on checking out some of the acts at SXSW?

Lee SH:  I've been listening to a lot of the bands here through the SXSW app.

Park:  That's high tech. I just wrote them all down. [Shows the note.] 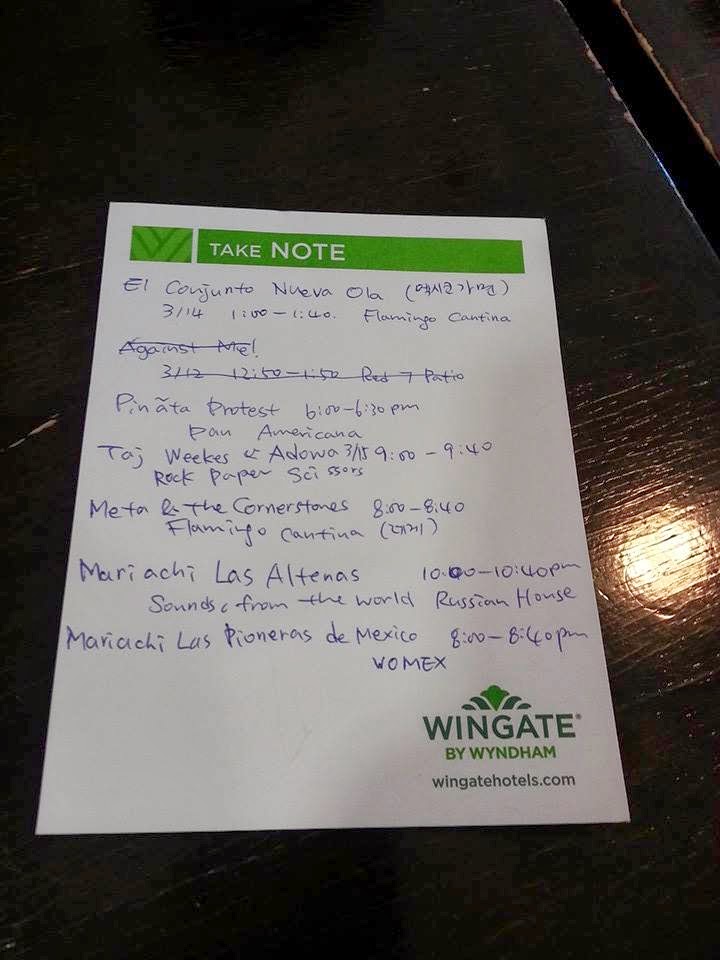