My name is Roy, and I am reaching out to you on behalf of the Los Angeles County Dept. of Public Health (LADPH). LADPH just launched a public awareness campaign that urges people to protect themselves and their loved ones from preventable disease through proper vaccination. I work with SAESHE, a marketing agency that handles LA County's Asian American marketing and community outreach.

Los Angeles County is currently experiencing the worst epidemic of whooping cough in 60 years, with more than 870 cases last year alone. Effective of July 1, 2011, a new California school immunization law will require all 7th-12th graders in public and private schools to receive a pertussis booster (Tdap) shot, protecting them from whooping cough.

On behalf of LADPH and Los Angeles County, we are asking The Korean: Are vaccinations safe? Why should we get vaccinated?

Despite the wishes of the Korean Parents, the Korean is not a doctor. But it does not take a doctor to know that vaccinations have done a tremendous amount of good for humanity. Thanks to vaccination, very serious diseases like polio, diphtheria and tetanus are practically eradicated. Vaccinations are safe, and we should be vaccinated to avoid preventable diseases.

Vaccination should have a more special meaning for Korean Americans, as it is one of the more enduring gifts from America to Korea. A very underrated contribution that America made for Korea is Korea's vast improvement in public health. As a Japanese colony, Korea's public health was miserable. Under the Japanese rule, Koreans had virtually no opportunity to receive medical education and become a doctor. Public health at the time was entirely focused on allowing the Japanese to live safely in Korea. The imperial police was in charge of public health in colonial Korea, and patients were treated as criminals, not people with illnesses. Virtually no attempt was made to treat the patients who were quarantined.

A good example of the brutality of Imperial Japan's "public health" policy is the way it treated Korea's leprosy patients. By the time of independence in 1945, Imperial Japan had built the world's largest leper colony in Korea, holding some 6,000 leprosy patients in an isolated island of Sorok-do. These patients, and their Japanese watchers, did not learn of Japan's defeat in World War II until three days after Japan surrendered. The Japanese in charge of the island heard the news along with some of Korean patients when they visited mainland to receive supply. The Japanese officials then killed 20 Korean patients on the boat to prevent the news from spreading, then returned to the island to embezzle the supplies in the island. The news nonetheless spread among the lepers, and the Japanese officials killed more than 60 patients in the ensuing riot before leaving the island.

The state of public health went from miserable to atrocious following the independence and through Korean War. At its height in the late 1940s, Seoul had 40 new smallpox patients every day; 40 percent of the patients died -- and we are talking about the disease whose vaccine was discovered in 1796. According to the U.S. military reports in 1946, nearly a thousand people died in one small town alone (Seonsan, Gyeongsangbuk-do, a little north of Daegu,) in just one week from at least five different communicable diseases. In 1949, it was estimated that more than 1.4 million Koreans had tuberculosis. In 1951 during the war, the same number was estimated to be 2.8 million.

American presence in Korea since the independence and through Korean War played a huge role in vastly improving such atrocious state of public health. Vaccination played a huge part in this. Of course, the starting point of American military's public health policy in Korea was its concerns about the health of their own soldiers who come in contact with Koreans at the time. During Korean War, one of the first steps to join KATUSA -- Korean soldiers who assisted the U.S. troops -- was to be sent to Japan and be vaccinated for smallpox, typhus, cholera, etc. But it is too cynical a view to think Americans acted out of pure self-interest. Despite being on a lower priority, Korean civilians eventually received regular vaccinations in an organized fashion. Much of humanitarian aid from America also focused on vaccination as well. 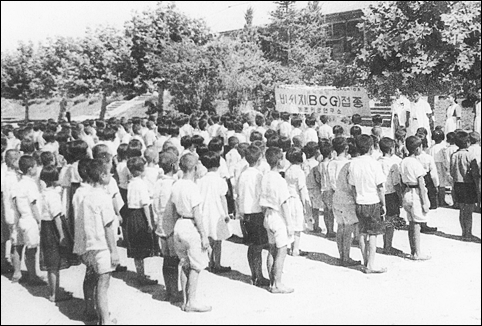 Elementary school students in Gaejeong, Jeollabuk-do
line up for BCG vaccination against tuberculosis (circa late 1950s.)
American emphasis on preventive public health is
very much alive in Korea to this day.
(source)
In this day and age, the Korean does not know a reason why anyone would refuse to be vaccinated. But if you are a Korean American who need more reasons than the good folks at VaccinateLA could give, here is one more: thanks to the vaccination practices that America transplanted in Korea, Korea now has one of the lowest death rates in the world -- ironically, much lower than those of the U.S. Vaccination has proven to be a life-saving gift; it would be terrible manners to reject such a gift.
Got a question or a comment for the Korean? Email away at askakorean@gmail.com.
Posted by T.K. (Ask a Korean!) at 11:02 PM