This probably does not have much to do with Korea other than it happened in Korea -- crazy is crazy no matter what the location. But it is pretty crazy. Translation below. 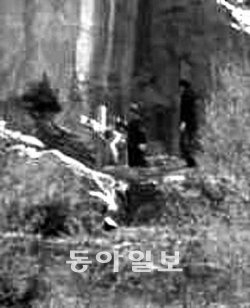 Wooden cross discovered at the site.
Also discovered on cite was the sketch to design and produce the cross, a whip that was apparently used to strike the body and cut pieces of wood. In front of the cross, there was a round mirror that reflected Mr. Kim on the cross. Inside Mr. Kim's car, discovered approximately 100 meters away from the scene, were a tent, a hammer, a drill, a knife and a memo pad that contained notes on how to be crucified. According to the medical examiner who checked the scene, the nail was directly inserted into the feet. However, there were signs that the holes were drilled into the hands first, then slid into the large nails already attached to the cross. 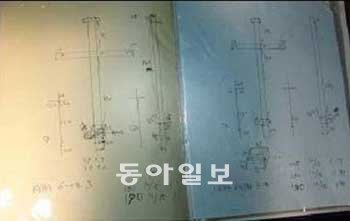 Sketches of cross design, discovered at the site.
The area is a quarry that had not been operational for a long time, and few ever visit the site. It is difficult to approach, as it is surrounded by large rocks. The police is weighing on the possibility that a religious fanatic or a psychopath who held a grudge against Mr. Kim committed the murder, but is not excluding the possibility that Mr. Kim killed himself with help from another. The police is particularly focusing on the fact that Mr. Kim was known to be a Christian, and the day when the body was discovered was May 1, the Easter weekend. The police instituted a multi-front investigation in order to discern the recent tracks of the dead and establish the precise cause of death. A representative from the Police Agency said, "We found that Mr. Kim was involved with a certain cult; we are trying to see if that fact is relevant here," and added, "We will find the precise cause of death after the autopsy."

Got a question or a comment for the Korean? Email away at askakorean@gmail.com.
Posted by T.K. (Ask a Korean!) at 10:08 PM