The Korean gets a lot of these questions -- something along the lines of, "Dear Korean, I am trying to research on this topic. Can you recommend me a book or an article that deals with this topic? By the way, I can't read Korean."

The Korean appreciates the interest in studying Korea, but the truth is that there are relatively little English material about Korea out there. There are general overview of history, culture or travel guides, but step into a topic that is a little more focused -- like the issue of mixed-heritage Koreans in Korea, for example -- there is just no material in English. The reason for this is simple: there are relatively few people who speak Korean and English fluently, and study Korea in a systematic way in English.

For an important example, check out this interview with B.R. Myers, who recently authored the book The Cleanest Race. The central thesis of the book is that the propaganda that North Korea makes toward the outside world is drastically different from the propaganda aimed toward its own people, and that propaganda aimed at its own people is not communism or the juche ideology as many have previously thought, but a crude race-based nationalism that elevates the North Korean race above everyone else in the world. 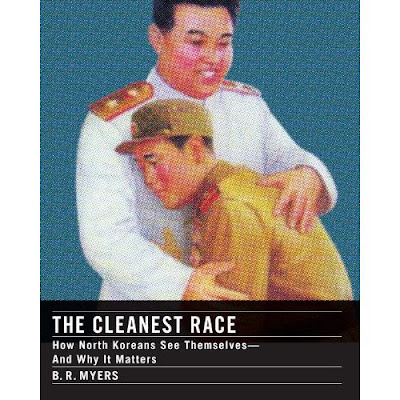 Although certain minor points that Myers makes are eyebrow-raising, (like the idea that South Korea is the second most nationalistic country in the world following North Korea -- seriously?) Myers' main thesis is very good. The Korean's only quibble with Myers' thesis was how it was received -- people thought this was an earth-shattering idea that North Korea was not really a communist state, as Myers' book was praised for being "fresh" and "counter-intuitive" from a number of prominent reviewers.

The Korean was intrigued by this reception. Myers' point is insightful, yes, but counter-intuitive? How was it not obvious that North Korea's internal ideology was a race-based ideology, only slightly different from the version that was pushed in South Korea (especially during the Park Chung-Hee regime)? Many South Korean scholars studying North Korea knew this fact at least for the last 30 years. Just a cursory look at what North Korea uses for internal propaganda makes it really obvious...

Then it hit the Korean: English-speaking people were NOT reading articles in Korean, much less the original source materials. Why? Because they can't. Myers himself makes it clear in the interview:


You talk about how the lack of skills with the Korean language, reading and speaking, which are no problem for you but stop a lot of other North Korea-watchers from truly understanding the country. How hard is it beyond that to read between the lines in the propaganda and get some genuine information like what you describe?
It's not hard to read between the lines with North Korea. If you read Soviet newspapers — and I remember doing that back in the eighties, back during the Cold War — you had to read between the lines, because a lot of information was written in a cryptic way: information about which functionaries were on the way up and which functionaries were on the way down, for example.
But North Korean propaganda really isn't like that. There aren't any hidden messages or coded messages in there, but occasionally you come across things like the articles about the diseases that I just mentioned, which give you an insight which perhaps the government in North Korea does not want you, as a foreigner, to have. They'd be perfectly happy if no foreigners ever read their internal propaganda materials, I think.

In essence, Myers is saying -- "If you numbskulls who purport to observe North Korea had bothered to actually read what the regime was telling its people, what I am saying right now should be freakin' obvious." This is so ridiculous that the Korean can hardly believe it -- how can anyone attempt to learn anything about Korea without speaking Korean?

Some of you might wonder, "What about Korean news in English? Surely they should be helpful toward learning about Korea, right?" The Korean would agree, but only to a degree -- one should take with a grain of salt what little things about Korea that are available in English. First of all, some English-language Korean newspapers are extremely dubious in journalistic quality. Korea Times is the most frequently cited example of this, and deservedly so with this kind of articles. This is because English-only newspapers about Korea such as Korea Times and Korea Herald have a tiny circulation (for obvious reasons,) so they cannot do much about having a strict quality check. In fact, the survival of these newspapers largely depend upon Koreans who are trying to learn English (and presumably get their actual news elsewhere), which makes the journalistic quality nearly irrelevant.

What about the English-language versions of major Korean newspapers? They are definitely better than English-only Korean newspapers, but they have their own problem. The Korean previously wrote about it here, but the gist is: Back in July 2008, there was a major incident when a South Korean tourist in North Korea was shot in the back by a North Korean guard. It was a huge news that was immediately made the top story in every single news media in Korea. But in the English versions of the two leading newspapers in Korea, the story did not appear until 20 hours after it was first reported in Korean versions. Even when the story did appear, it was tucked in the bottom half of the website. This is because for these newspapers, the English portion is an afterthought. Their main business is to deliver news to Koreans who speak Korean language.

OK, then what about established English-language media, like the New York Times or BBC? They are not free from problems either. First, they often display a shocking lack of knowledge of even the most obvious facts when it comes to Korea. For example, as the Korean pointed out previously, a BBC reporter wondered in an article whether Christianity had a long-term place in Korea, although in fact Christianity has been going strong in Korea for 200+ years, so much so that Pyongyang in late 19th century was called the "Jerusalem of the East". For another example, when former president Roh Moo-Hyun was elected in 2002, Wall Street Journal put up a picture of former president Roh Tae-Woo. 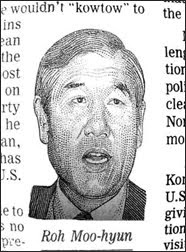 Seriously, this actually happened.
Second, even if an established English-language media has an established Korea-related correspondent, their scope is necessarily limited. To be sure, beat reporters like Choe Sang-Hun of New York Times or Evan Ramstad of Wall Street Journal are terrific reporters and quite knowledgeable about Korea. But despite their knowledge, they are often the only person for their respective newspapers covering a nation of 48 million people. Even if it is a New York Times or a Wall Street Journal story, in effect it is just one person's perspective informing the article.

Also, as it is almost inevitable when it comes to news from abroad, a good number of Korea-related articles are in the frivolous, hey-look-at-these-crazy-people variety -- such as the reportage on a Korean man who stole 1,700 pairs of shoes.

Because of all this, the Korean refuses to read anything about Korea in English, for the most part. (There are obvious exceptions, such as books and articles about America's foreign policy with respect to Korea, for example.) Practically, this means that the Korean really just does not have any recommendations to give if you are unable to speak Korean. (And if you could speak Korean, you probably won't be asking the Korean.)

So, very sorry to all of you high school and college students who are writing a research paper about Korea -- the Korean is no help. He gets most of his knowledge about Korea by (surprise!) reading in Korean. (And please, do not cite this blog for your paper. That is absolutely inappropriate.)

But for those of you who are really, truly interested in Korea, consider this to be an opportunity. If you can somehow become fluent in Korean and have some measure of intellect, you can re-package what was already known in Korea into English and become a pioneering academic. Because you will likely be one of the few sources in English on that topic, your book/article will be frequently cited as an authority. Frankly, the Korean is an idiot for not doing that right now.

Got a question or a comment for the Korean? Email away at askakorean@gmail.com.
Posted by T.K. (Ask a Korean!) at 9:43 PM