What type of family feuds are there in Korea? Is there anything similar to the U.S. Hatfield-McCoy one?

Not exactly like Hatfield-McCoy, but the Korean can think of one such family rivalry -- Andong Kim versus Poong'yang Cho. And with it, we have an interesting story of royal power and intrigue in the 18th century Korea that led to the significant weakening of the country, vulnerable to foreign invasions in the 19th and 20th century.

(The Korean previously wrote about Andong Kim, and what "Andong" in Andong Kim means, here.) 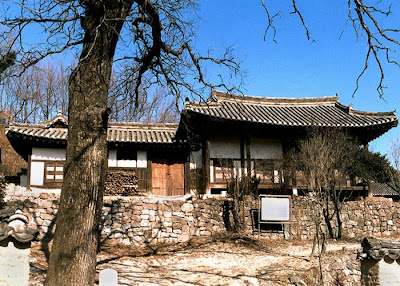 Andong Kim family house. (Source)
The year is 1800. Korea has been enjoying peace and prosperity for the last 100 years or so, thanks to the rule of two strong kings Young-jo and Jeong-jo. However, the trouble began to brew when Jeong-jo suddenly passed away at still-robust age of 49. There is a conspiracy theory that the king was poisoned to death by a partisan of noblemen, since the king was a strong-minded man who did not hesitate to kill off anyone who dared to oppose him. But there is no definite evidence to prove one way or the other.

The next king Soon-Jo was only 11 years old when he ascended to the throne, and was simply in no condition to exert power over the grown-up game of politics. Thus, a man named Kim Jo-Soon rose to prominence. Kim Jo-Soon, a leader of the Andong Kim clan, was the king's father-in-law. He established himself as a "National Elder" (국구 國舅) advising the king, and wielded the de facto royal authority as long as King Soon-Jo lived. Kim Jo-Soon appointed many of his family members as officials, and the Andong Kim family as a result came to dominate Korea's royal politics.

It is safe to say that King Soon-Jo was a weak-minded man who never had the chops to rule a country as a king. This was made quite evident that in 1827, when he was only 38 years old, King Soon-Jo voluntarily gave up his power to his 18-year-old son, Prince Hyo-Myeong. Prince Hyo-Myeong was married to a woman from the Poong'yang Cho family. Accordingly, Poong'yang Cho family began to rise in power, and Andong Kim family began to wane. Most significantly, Prince Hyo-Myeong sent Kim Jo-Soon away from Seoul as a governor of faraway Pyeong'an Province. 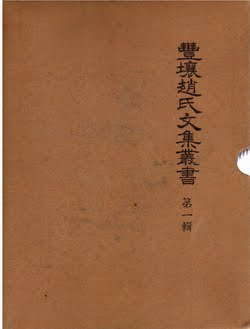 Family book (족보 "jokbo") of the Poong'yang Cho clan
Somehow, Prince Hyo-Myeong did not live long either -- he would pass away only three years after he took the power from King Soon-jo. King Soon-jo returned to the forefront, and with him the Andong Kims came back with a vengeance. But King Soon-jo would also die only four years later.

The next king was Heon-jong, who was mere eight years old (!) when he became the king. Heon-jong was the son of Prince Hyo-Myeong, which necessarily meant that he was under the thumb of his mother, a woman of Poong'yang Cho family. The king's mother in fact handled all royal business on behalf of the king for seven years, and Heon-jong could only exercise his own power at age 15. But King Heon-jong would also die young in 1849, at age 22.

The story of how the royal family found the next king would be humorous if it was not for the disastrous period of Korean history to which this succession of young kings dying early led. King Heon-jong died without a son, and the wife of King Soon-jo (i.e. mother of Prince Hyo-Myeong and grandmother of King Heon-jong) ordered a search for the new king.

Yi Won-Beom was a grandchild of King Jeong-jo's step brother. (Korean kings, like most kings in history, had multiple wives.) Although Yi Won-Beom belonged to the royal family, he did not enjoy any royal privilege because one of his many step brothers rebelled against the king and tried to take over the throne. Yi Won-Beom's entire family therefore was exiled to Ganghwa Island, and Yi Won-Beom lived like any other commoner. It is said that when the queen mother's grand envoy found the 18-year-old Yi Won-Beom to ascend to the throne, he was flying a kite with his friends.

All the while, the power struggle between Andong Kim family and Poong'yang Cho family was raging. Because so many kings were young and powerless, people knew to appeal to the Andong Kim or Poong'yang Cho family to get to wealth and prosperity. The Confucian system of meritocracy broke down, and corruption became rampant. As a result, Korea decayed during the 100 years following King Jeong-jo's death. The next king after King Cheol-jong would go on to sign away most of Korea's sovereignty to Japan, and the next king would finally sign away the entire country.

Not exactly a quaint and ultimately harmless story like Hatfield-McCoy feud, but a sad story full of intrigue.

Got a question or a comment for the Korean? Email away at askakorean@gmail.com.
Posted by T.K. (Ask a Korean!) at 11:09 PM