First, a little background. Kim Su-Hyeon is a writer of Korean dramas, and can legitimately be called the queen of Korean dramas. She started writing scripts for Korean dramas since 1972, and so far wrote for more than 45 dramas, many of them massive hits. She is essentially like Steven Spielberg -- Kim continues to churn out essentially the same dramas with different variations on the theme, and people simply love them. 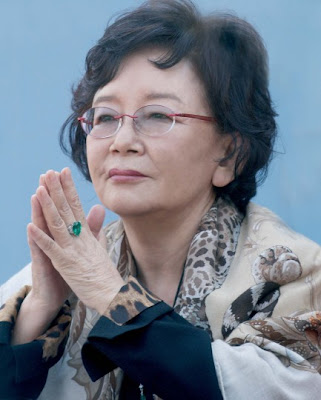 Kim Su-Hyeon.
Kim's latest work is Life is Beautiful (인생은 아름다워), which is again a huge hit. In addition to being wildly popular, Life is Beautiful is making headlines for prominently featuring a gay man among the characters. Dong-A Ilbo interviewed Kim on the drama.

Kim Su-Hyeon: "Homosexual Story Will Go On Until the End"

Life is Beautiful by writer Kim Su-Hyeon, airing on SBS TV, has been garnering increasing ratings, threatening the 20 percent line. The drama, depicting with a comedic touch a remarried family including a father who has had concubines all his life, the eldest son who is gay, the two younger siblings who never married despite being middle-aged regarding such various topics as Korean-Japanese and abortion, emanates a special presence in the current drama scene rife with sensationalism.

In Life is Beautiful, the banal themes such as adultery, secrets of birth, revenge and evil are completely taken out. Instead, it delivers the message that every human is basically good, and life is ultimately beautiful despite moments of adversity, in a calm yet lingering manner.

Dong-A Ilbo interviewed Kim over the phone on the 27th. The veteran writer, nearly a septuagenarian, stands alone as the super-writer in the domestic broadcasting scene, while at the same time serving as an active opinion leader whose energy embarrasses the younger generation. Her unhestitating manner of speech exuded flinty strength and attractive confidence.

* Actually, I am thankful that the protests are not as intense as I thought. I think the way society thinks about gays has improved a lot. But I don't know why people focus so much on just one element of this family drama. I didn't write this drama to have a human rights movement for them [the characters]. A gay child can come out of any family. They are not special. I am just observing them with an eye without prejudice. I don't depict them to be particularly good or strange. I just depict the phenomenon as it is.

- But it is a groundbreaking event to feature homosexuality front and center on a network TV for the first time. Even younger writers avoid this topic.

* I always thought that I should try this issue at some point. But it would have been a bad idea to do that earlier, considering how much controversy there is now. (Laughs.) I think the society matured by a great deal. The issue might be scary for younger writers. There are people waiting with stones in their hands, so it probably is not an easy topic for them. But I am not going to stop with the story just because of the protests. I anticipated them, so I will keep the story going until the end. I will never quietly fold that aspect of the drama. Then putting them in the family drama in the first place will become meaningless.

- It is also novel to omit the process by which the characters realize their sexual identity and jump straight to the love between two men from the beginning. But that also generates curiosity and concern about how the story will unfold from this point on.

* They are not some adolescent boys, and the process by which sexual identity is realized is boring. But I don't understand the concerns. I think the concerns come from the fact that when people think "gay", they automatically think about something sexual. There is a difference between homoeroticism and homosexuality. There are people who protest that their children might learn, but homosexuality doesn't depend on teaching it or not teaching it. It's an issue of inherent genetics. To criticize based on such inherent characteristics is just like discriminating black people. There are people who say Kim Su-Hyeon encourages homosexuality, which is disappointing. Homosexual love is not different from love between a man and a woman.

- Having the drama set in Jeju-do Island is refreshing.

* I was getting tired of the same background for every home drama, and I wanted to set the scene there because so far, Jeju-do was only known as a tourist destination. But I almost gave up on it because the production company seemed to be agonizing over the cost issue. But then the production company moved forward with it. I have no regrets. It has clean air and just beautiful.

- There is also much attention given to the father character who has 15 children from six wives. There is curiosity about whether the writer will forgive him. Some analyze that you have never forgiven men who have wronged.

* Haha, is that right? Forgiveness, hm. The word "forgiveness" is a little strange. You know what old grandmothers used to say -- they [men] crawl back when they are old and sick. I modeled the father after an actual person, who was a special case even at a place like Jeju-do where men are relatively scarce. The father of a close acquaintance also lived with his second family his whole life and only returned to his original wife close to the end of his life, then died there. I don't really know how I will handle this. Just keep watching.

* Where did you get that from? Did they confirm with me? No way, that's no fun. Now I'm going to get some Internet attacks. But the actors get over $100,000 per episode, so why not writers? Actors only show up on parts of the drama, but the writer writes the whole thing from the beginning to the end. People put on their colored glasses whenever the writer's fee topic comes up, but I don't think they even try to understand the reason. That makes me worried about discouraging other writers; it also makes me worried about just anyone asking for $50,000.

- Of course your fee is the highest, given that you write dramas with high ratings without resorting to sensationalism.

* You can't have a situation where all human images are twisted. TV stations might support any drama with any reason as long as the ratings are there, but that's not even logic. We can't have sensationalism as a trend.

* I usually do that in the evening, when I'm not writing. But there are times when it's hard to keep up when the writing just pours out of me. I have this lingering feeling if I am sitting on a reply. (Laughs.) I only started it by accident, and just got hooked.

- You are just full of energy.

* What are you talking about? Look how old I am. But so far, at least I have handed over the scripts without any problem.

- Do you still travel to Jeju-do to write?

* No. At first I did when I had time, but now I write exclusively in Seoul.