Recently I watched two Korean TV series titled "Dae Jang Geum" and "Hwang Jin Yi". I would like to know about Korea’s traditional hairdo for women. Could you give some explanation about it? It seems very sophisticated.

There are many, many different variations to traditional Korean hairdo, especially considering that Korea has a long history and the trends changed more than a few times. Also, the producers of historical dramas often take the liberty to innovate the existing styles to make the visuals of the drama more interesting. So the Korean will discuss the most prominent archetypes.

Example of a bae'ssi deang'gi meori (Source)
For all of the hairstyles, you would notice that the word Meori being used a lot. Meori means "head", "hair on the head" (as opposed to hair on any other body parts), or "hairdo".

Daeng'gi Meori is one of the most classic hairdos, easily seen all the way into 1960s. With daeng'gi meori, long hair is braided into a single long braid, and accented with a bright colored- ribbon (called daeng'gi) at the end. Only unmarried women wore daeng'gi meori. Notable thing is that in traditional Korea, unmarried man also wore daeng'gi meori, only with a different colored daeng'gi. This was because Confucianism requires that you cannot cut your hair, as it is a part of your body given from your parents. (However, as you will see from the examples below, the requirement was fairly flexible.)

The model in the picture is wearing an additional daeng'gi on the top of her head, called bae'ssi daeng'gi. Bae'ssi (배씨) means "pit of a pear," from which the shape of the ornament came. This additional adornment is traditional, but was not very common. 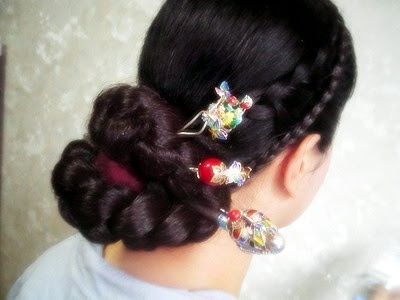 Example of jjokjin meori (Source)
Jjokjin meori is probably the most classic Korean hairdo, since the hairdo can be seen to this day. Jjokjin meori was for married women, formed by first parting and holding down the front part of the hair and then tying the hair into a bun in the back of the neck.
The large pin that holds the bun together is called bi'nyeo (비녀). The material and the design for bi'nyeo significantly varied, and offered a point of style for traditional women. Bi'nyeo could be made with gold, silver, jade, wood, bamboo, animal bones, etc., and the design included symbols for phoenix, dragon, wild ducks, lotus flowers, etc. The size of the bi'nyeo can also vary significantly -- some of the decorative bi'nyeos were as long as two feet.
In addition to bi'nyeo, the bun can hold a number of other accessories. Most are purely decorative, but interestingly, some of the accessories are functional. For example, the buns could hold elaborate combs or long scoops for earwax removal -- almost like the way Marge Simpson holds a coin jar in her hair.
As with daeng'gi meori, accessories can be added on the front part of the hair.
Eon'jeun Meori (얹은 머리) 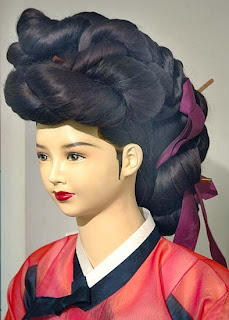 Example of Eon'jeun Meori (Source)
Also a popular option among married women in traditional Korea. Instead of the bun being on the back of the neck, it "rested" (eon'jeun) on the top of the head.
Notable thing about this hairdo -- and probably the reason why it did not survive as long as other hairdos did -- is that often, women used wigs to make their hair much more fuller. As you can imagine, they were heavy and very expensive. (Obviously, it takes human hair to make the wigs, and most people refused to cut their hair.) Because of that, there was a royal order in the mid-Joseon era prohibiting the use of wigs as they were deemed to be promoting wasteful spending as well as neck injury. Even today, the wigs are a significant enough burden for actresses who star in historical dramas such that some directors elect not to use the wigs although the drama might become historically inaccurate.
(As a bonus, here is an interesting story about the only shop in Korea that restores and makes those wigs, mostly for shooting movies and dramas.)
Eo'yeo Meori (어여머리) 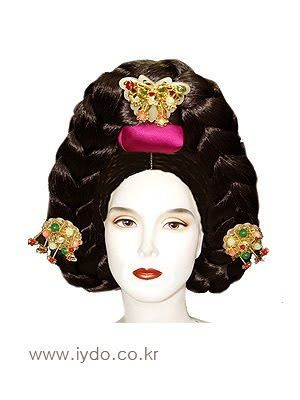 Example of eo'yeo meori with tteoljam (Source)
Now we are moving on the hair worn by women in the palace. This hair is made almost exclusively with wigs. These are worn by queens, other kings' wives and queen mothers. Additional decoration (called tteoljam 떨잠) were added to create a more luxurious look. 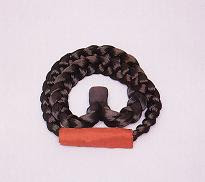 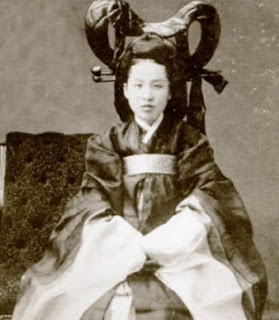 Empress Myeongseong, the last empress of Korea, with keun meori.
The mother of all traditional Korean hairdos. On top of the eo'yeo meori, a gigantic addition called tteoguji (떠구지) is affixed for, um, emphasis. Originally the addition used to be made with actual human hair (!), but after the prohibition on wigs, it was made with wood carved and painted in black in order to make it resemble human hair. Apparently the wooden addition was actually lighter than the addition made with human hair.
Got a question or a comment for the Korean? Email away at askakorean@gmail.com