Excellent article on Dong-A Ilbo about how cell phone is playing an invaluable role in getting information from North Korea, written by none other than Mr. Joo Seong-Ha of Nambuk Story. Translation below.

Recently, major news such as North Korea's currency reform and the outbreak of H1N1 influenza were first uncovered by North Korea-related non-governmental organizations. Information that the Korean government cannot verify is being broadcast live on these organizations' homepage every minute. Cell phone is the most important device in making this possible. In the era of 18,000 North Korean defectors, cell phones are unveiling North Korea's shroud of secret.

It has only been around ten years since North Korean people communicated with China or Korea via cell phone. At first, the cell phones were brought in by Chinese smugglers who needed to contact their North Korean counterpart. But as the number of defectors to Korea increases, the number and use of cell phones connected to North Korea has been increasing as well. Cell phones are used to make appointments, sending people and money, or delivering goods that people ordered. There is even a case in which a Korean pastor uses cell phone to proselytize by calling his followers in North Korea at a specific time every week.

A cell phone connected to North Korea, combined with individualized reporting through Korea's Internet, provides a wealth of information that surpasses traditional media. It is expected that there will be more occasions of North Korea-related NGOs competing for breaking news. 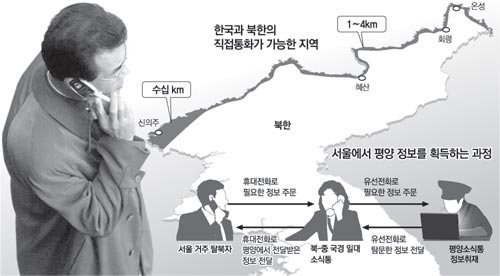 Shaded area signifies the belt where a direct call to South Korea is possible.

Notice the wider band on the western edge of the map.

Usually Korean-Chinese act as a broker to smuggle phones into North Korea and pay phone bills, as defectors who live in Korea usually form a considerable network in China in the course of escaping North Korea. Calls with Korea usually occurs at night. North Korea began setting up wired phone in individual homes since around 2000. There are currently 90,000 North Koreans enrolled in the wireless phone service, which began in December 2008. These phones, while unable to make direct calls to Korea, periodically send information from the inland, including Pyongyang, toward the information belt along the North Korea-China border. In other words, there is a system in place through which a person located at the border can verify information by calling Pyongyang and immediately relay it to Korea.

North Korean government is well aware of both the method by which cell phones connect to South Korea and the danger it poses to the regime. Several years ago, North Korea purchased a fleet of German-made signal-detecting vehicles (each of which cost nearly $1 million) as well as portable detectors from China. These make it risky to speak more than a minute in the border cities in North Korea. Informants make their calls either while constantly connecting and disconnecting, or in a nearby mountain where a vehicle cannot easily reach. A relatively longer call can be made in the rural areas.

North Korea punishes those calling with South Korea harshly, going as far as execution. China is also known to have a system that automatically taps any calls near the border, but it is unknown whether it shares the information with North Korea.