I would like to know of the common religion that most Koreans believe in. Is there some sort of fixed Korean religion, or are they just a bunch of Koreans who believe in different religions or so? If so, what other religion do they believe in?

Recently there was a news story of Armenian and Greek Orthodox monks in Jerusalem (again) brawling over procedure/territory. That makes me wonder whether the factions in Korean Buddhism, or, for that matter, Christianity, share a particular enmity. (You know how God can fire up some folk.) Personally, I can see where the followers of Mithras might have a problem with the rest of the world (those pesky safety regulations), but what is the situation in the Land of the Morning Calm?

Do you know how common traditional Korean religions are in Korea these days? I used to have the impression that most Koreans no longer practice traditional religions, and that most are not religious or are some form of Christian--but sometimes I still come across stories about rituals in the mountains or business execs moving their family graves for good luck but at horrendous cost. I'm sure some Koreans are still following traditional religious ways, but do you know how common it is? Are there any stats anywhere? As for fortune telling, I know it's still widespread, but almost all young people I've talked to (under 30) say they go to a fortune teller just for fun and don't take it seriously.

First of all, a full disclosure – the Korean is a Presbyterian. Discussing religion is always a tricky subject, so that disclosure was necessary.

Let us address Max’s question first. The answer is that Koreans generally believe in different religions. According to the 2005 census by Statistics Korea (a quasi-governmental body dedicated to creating official statistics,) here is the breakdown of major religions in Korea: Buddhists 22.8 percent, Protestants 18.3 percent, Catholics 10.9 percent and 1 percent for Other.

What you may notice is that there is a very large population of Koreans who have no religion at all, since the religious population only adds up to 53.1 percent. This does not mean the non-religious Koreans are atheists – it just means that many Koreans simply do not care too much about religion. Accordingly, religion is not really a part of public discourse in Korea. What may be controversial in the United States because of religion – e.g. abortion or stem cell research – is not controversial in Korea.

To answer Cactus’ question, people of different religions in Korea get along with one another quite well. To be sure, recently there has been some backlash against some Protestants who proselytize very aggressively, mostly in the form of nasty Internet rants and some scattered cases of vandalism on church buildings. Also, the fact that the current president Lee Myeong-Bak is a devout Christian whose cabinet includes some of his church members draws some collateral fire against Christianity from those who dislike Lee. (For example, when Lee was a presidential candidate, Buddhist leaders of Korea demanded that Lee to be more accommodating for Buddhists. Lee promised he would.)

But in the grand scheme of things – especially given our knowledge of how explosive and deadly a religious strife could be – religious life in Korea is generally diverse and tolerant.

-EDIT 12/11/09- Upon reading Cactus' question again, the Korean realized he read it completely wrong. How embarrassing -- the Korean is very sorry. Let us actually address it. The different factions within each religion in Korea mostly get along just fine. But there are occasional instances of tension that sometimes escalate to physical jostling. For example in 2006, there was a physical altercation between Buddhist monks of Seonam-sa and of the Buddhist head organization Taego-jong, the second largest faction of Buddhism in Korea. (The largest is called Jogye-jong.) The altercation occurred because the monks of Seonam-sa temple wanted more independence from the head organization, and Taego-jong was not going to stand for it. This incident was roundly mocked by irreligious Koreans. 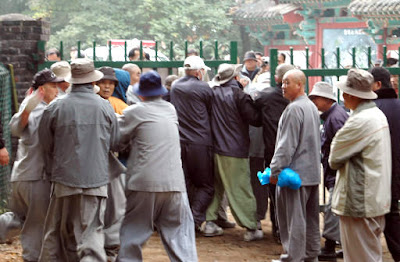 Nothing to see here folks, just brawling monks at Seonam-sa.
No nunchakus or anything.


Also, certain Protestant churches in Korea are known for their extremely aggressive proselytizing, which includes denigrating other Christian branches and other religions. But while they are highly visible due to their shrill loudness on the streets and on the Internet, their absolute number is quite negligible. So while those groups generate some amount of tension, the manifestation of that tension is usually confined to flame wars on the Internet message boards, not any actual physical altercation. -EDIT over-

Also, there are a host of minor organized religions in Korea that may be considered “traditional religion,” in a sense that they contain some reflection of traditional faith. Such religions include Won Buddhism, Chondogyo, Zeungsangyo, Daejonggyo, etc. For example, Daejonggyo, established in 1909, is based on worshipping Dangun, the mythical progenitor of all Koreans back in 2333 B.C.E. But the influence of these religions is nearly negligible, as less than 0.5 percent of all Koreans believe in those minor religions combined.

Then there are the traditional, unorganized faiths/superstitions, such as fortune telling, feng shui, shamanistic rituals (gut), etc. There is no real statistics about how prevalent these things are. The Korean’s own experience has been that the oldest generation of Koreans takes them seriously, while the rest not so much. (The Korean Grandmother, 94 years young, is a huge fan.) It is not very easy to see a real-deal gut, for example – which is a pity, because it is quite a spectacle. 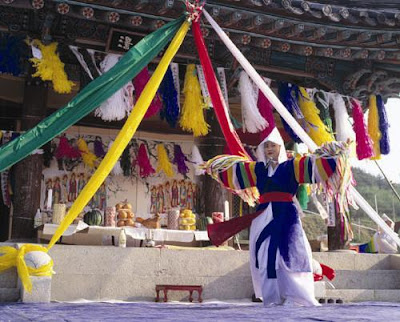 Instead, the younger generation in Korea has turned them into somewhat of an entertainment, like the way American girls use a mirror and a brush to find out what their future husbands look like during a sleepover. There are a number of “fortune telling cafes” in Korea, where mostly young clientele enjoy coffee while different fortune tellers visit the tables to read their future.

But, to the extent it does not take too much effort, many Koreans lukewarmly follow those superstitions in a eh-what-have-I-got-to-lose manner. For example, many Koreans do consult some feng shui-type book or website when choosing the gravesite for their parents. Similarly, many Koreans do a perfunctory check when naming their children to make sure they did not inadvertently saddled their children with a name that invites bad luck.

One time when he was living in Korea, the Korean visited a fortune teller, whose trick was to pull three Chinese characters out of hundreds that represented the Korean's personality and destiny. The characters for the Korean were: 才, 才 and 才. Talent, talent, talent. The Korean does not (and did not) take fortune telling very seriously, but he's not going to lie -- that felt pretty good.

Got a question or a comment for the Korean? Email away at askakorean@hotmail.com.
Posted by The Korean at 11:20 PM