Here is an interesting article that nicely describes the interplay between Korea's Internet and its entertainment programs. Original here.

[TK Note: "Portal" is the word Koreans use to describe sites like Naver or Daum, which is similar to the structure of Yahoo! or MSN with a lot of content in the front page along with a search engine.]

The media scholars of the future may record July 2004 as a significant moment, because it is the date when Paran.com, Internet portal operated by Korea Telecom, officially launched. Why must we remember the launch of Paran, which no longer has much presence at this point?

At the time, paran.com focused on the Korean Internet users' high interest in contents regarding sports and entertainment. So it secretly entered into an exclusive deal with the five largest sports newspapers in Korea for a groundbreaking sum of $100,000 per month for a year. [TK Note: "sports newspapers" are Korea's tabloids, focusing on sports, celebrity gossip, lots of pictures and cartoons. All dollar figures assume $1 = KRW 1,000.]

Behind the so-called "Paran incident", there exists the portal market that was on a meteoric rise. 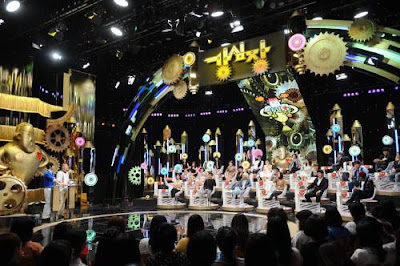 Gangshimjang, a mass-guest talk show, is the top rated show on Tuesday
At the time, the portal companies were engaged in a heated competition to attract visitors by cramming articles about sports and entertainment, preferred by young Internet users. Paran, which was late in joining this competition, reacted by hoarding the sports and entertainment content from the sports newspapers for $6 million for a year (five companies for $1.2 million each.) This was based on the erroneous judgment that monopolizing the killer contents would lead to the domination the portal market.

The result is as we know now. The competitors -- Naver, Daum and Yahoo Korea -- began to focus on supporting Internet news media that created similar contents. Within a year, the sports newspaper suffered a precipitous drop in circulation as well as in the public opinion-forming power that they previously had. Although this example is limited to entertainment content, the Paran incident went down in history that symbolizes the changed media environment.

The recent trend is that a portal site's main screen and real time search term rankings each morning are filled with gossips about celebrities who appeared on a talk show the night before. For a show to make a hit, it has to be "portal-friendly" -- because now there exists a virtuous cycle of voluminous and strong gossips feeding into higher ratings.

Of course, in any country's television, the night time is filled with talk shows featuring superstars. The the defining characteristic of "orthodox" talk shows, such as Jay Leno's "Tonight Show" or David Letterman's show, is a 1-on-1 conversation between the host and the guest. The conversation may be shortened through editing, but it does not veer from the basic framework of "person-to-person" conversation. Korea's best talk show, Gang Ho-Dong's Mureupak Dosa, follows the same format. There is no other show that is more populist, nor is there any other show that better showcase of the character of the guest. But it does have a weakness -- because there is only one guest, there is a large variance in its power to create issues.

At the point opposite of Mureupak Dosa is Gangshimjang, the ambitious new project by SBS. [TK Note: name of a TV station.] Gangshimjang focuses on how it could produce the greatest quantity of gossip materials in the shortest amount of time. Airing its seventh episode on December 1, this program is the culmination of the talk show format that reflects the very Korean, portal-led media structure.

"Quantity" and "Speed" - the Strength of Talk Shows Today

First, one must take note of the overwhelming number of guests. The number of guests for talk shows, including Yashim-manman (the previous edition of Gangshimjang) and KBS's competitor program Imagination Plus, has not exceeded 4 to 6 so far -- because even as a "mass talk show," that number was about the upper limit of a conversation considering the number of hosts (usually two to four.) In fact, the number of people before the camera on most domestic talk shows, including the hosts, are around ten.

But Gangshimjang came out with a groundbreaking format of two hosts and over 20 guests. 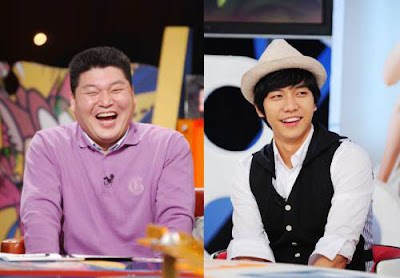 Gangshimjang's two hosts, Gang Ho-Dong and Lee Seung-Ki.
But their roles in fact are very limited.

Of course, not all 20 guests can be the main focus of a conversation. So the show boldly discards the conversation format; instead the guests toss to the viewers the pre-packaged "strong issue-creator" (or "chum", according to the Internet vernacular.) Seen positively, the show is an evolution toward a conversation with the viewers; seen negatively, it is an degeneration toward yellow journalism.

Of course, reaction from the Internet users alone is not enough. What really makes a TV talk show shine is the Internet-based entertainment-focused media companies. For these Internet-based, breaking news-focused media that strives for low cost and high volume, relaying the contents of a TV talk show plays to their strength. They are also welcome allies to television, since they provide a near-watching experience that does not require actually watching TV, and also some "official" authority even to simple gossip-like remark. In the end, the entertainment news on portal sites on Wednesday morning is filled with gossips provided by Gangshimjang and its competitor, Imagination Plus.

The limit of a traditional talk show is that there are only two or three topics to focus in one hour. But Gangshimjang brims with more than ten well-summarized and interesting stories. Thus, there is no overlapping news among different media, and generally more articles can be written.

Gangshimjang was initially considered a "survival talk show," emulating its predecessor Seo Sewon Talk Show. But now, it appears that it is an evolved form of talk show, aggressively accepting the portal environment. Leeteuk of Super Junior would reveal a fictitious "Realtime Search Term Ranking" in the middle of the show, and a portal company's search window naturally appears at the bottom of the screen as advertisement.

Because of Gangshimjang's rise, KBS's Imagination Plus (which had loudly proclaimed public interest) also began to invite multiple celebrities, quickly churning out "stimulating topics" without dragging on. We have now arrived at an age when the quantity and speed of a talk show "chum" determine ratings. 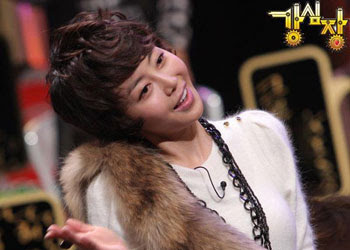 Singer Hwang Hye-Yeong on Gangshimjang.
On its December 1 episode, a 90s favorite Hwang Hye-Yeong (36 years old) appeared on the show after a long hiatus. She began on the topic of "Dating in my 20s":

"The biggest pop star at the time asked me out. I liked him too, so we began dating. We were on a secret date in a car, but we got into a fender bender on a snow road. Both of our production companies found out about us, took away our pagers and began a 24-hour watch. So we broke up against our will ..."

Immediately, the hosts asked who the man was. The secret of high ratings is not giving the answer right away. Hwang mumbled, "A member of the most popular group in 1994, who is still single." To this, Gang Ho-Dong concludes: "Don't worry. We have the Internet search party."

As Gang predicted, on the morning of December 2, the leading portal search term was: "Hwang Hye-yeong". The leading candidates for the mystery date, "Seo Taiji and Boys" and "R.E.F.", were also near the top. And the numerous entertainment news articles about this "scandal"! Everything worked out as planned.

Got a question or a comment for the Korean? Email away at askakorean@hotmail.com.
Posted by The Korean at 11:32 PM