Why is my father (a first generation immigrant) completely obsessed with any Korean athlete, even the ones that are mediocre at best, simply for being Korean? I do not understand this at all! Chan Ho Park and Hee Seop Choi have done absolutely nothing to warrant the demigod status they've attained in his eyes. Is it simply enough that they are Koreans who are "good enough" just to compete in traditionally non-Asian/Korean endeavors (i.e. sports excluding table tennis, badminton, or short track speed skating)? At least Hines Ward won a Super Bowl, and he's certainly no Jerry Rice, or even Randy Moss.

While your question waited in line for more than a year, right now Chan Ho (and his wife, apparently) is improbably making news again as a key setup man for the Phillies. (By the way, the Korean had to endure the triple commute time because of these stupid parading Yankee fans. Both Phils and Yanks can go die.) So this is a great time to answer your question. 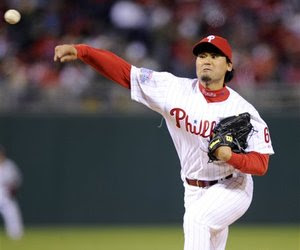 You can go die too, Chan Ho.

Your father is being a good old-fashioned Korean nationalist. The Korean previously explained nationalism thusly:

At the foundation of nationalism, there is a very simple premise: a person is nothing without his country, and his country is in constant danger of disappearance. Therefore, a citizen of a nation must absolutely devote himself to his nation to prevent such disappearance. Every member of the nation must contribute what he can for the country – soldiers must guard their country, businessmen must earn money for their country, artists must display the country’s creativity, and athletes must display the country’s physical prowess.

The corollary to this premise comes from the obvious truth that the world is made up of many nations. For nationalists, every citizen of every country in the world strives to strengthen their country. Essentially, each and every person in the world operates as a member of a team called "United States of America", "Brazil", "Thailand", "South Africa", "France", etc. And each team is striving to outdo one another in a giant world race for power, be it economic, political, social, cultural, or any other type one can think of. …

[Koreans] have lost their whole country twice in the last century – for 36 years to Japan, and briefly to communist North Korea during the Korean War. At each occasion of losing their country, many Koreans lost everything –their history, tradition, language, their property, family, children, and their own lives. Set against this historical experience, any objection to nationalism rings hollow. For Koreans, it is obviously true that without Korea, Koreans are nothing.

(That’s right, the Korean just quoted himself. Big whoop. Wanna fight about it?)

If they did not win, no one in Korea would care about this.

Accordingly, although Korea often has amazing displays of fan support for their athletes, it is fair to say that Koreans are bigger fans of their country rather than being fans of a particular sport. Short track speed skating is an excellent example. One might think, based on Korean fans’ enthusiasm during Winter Olympics, that there is a huge fandom of short track speed skating in Korea during non-Olympic times. Not so – Korean fans love short track skating because they win gold medals in Olympics. Same goes for nearly all sports in Korea – baseball and perhaps soccer might be the only sports in Korea that are popular for their own sake.

This means that the athlete’s individual skills necessarily take a back seat to the fact that they are Korean. Of course, Koreans love winners – short track skating and Kim Yu-Na are popular among Koreans because they win. But when a Korean athlete reaches a big stage like the Major Leagues, Koreans will root like hell for him and overplay every little good thing about that player, while swallowing down the knocks against him or remain intentionally blind to them. This phenomenon is much more intense for first generation Korean Americans, who often are more nationalistic than Koreans in Korea and also seek a validation for the idea that Koreans can succeed in America in those athletes. That’s what is going on with your father.

Korean Father – Are you watching TV? Chan Ho is pitching.
The Korean – I’m watching, but how could you root for the Mets? I’m living in New York but I still root for the Dodgers.
KF – I don’t care about the Mets. I’m watching Chan Ho.
TK – Dodgers have Hee Seop batting fourth. If there are Korean players on both teams, shouldn’t you at least root for your home team?
KF – There is a difference between a pitcher and a batter. Watching a pitcher standing by himself on that mound in the middle of the stadium like he owns the place… it’s just better.