Crime and Punishment in Korea

Is the crime rate rising in Korea? To see if that is true, there is no better place to look than the website of the National Police Agency in Korea, which provides this chart that lists the statistics for the five major crimes (murder, robbery, rape, burglary, assault):

But with this chart alone, it is a little difficult to see the overall trend. Therefore, following is a graph created by the Korean: 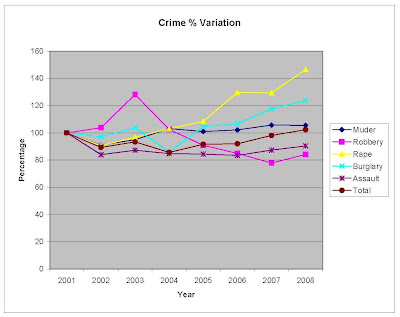 The graph is made to show the overall increase and decrease of each crime category. The Korean used the number of reported crimes rather than the number of arrested crimes, for obvious reasons. The 2001 values are held at 100, and the lines show the year-to-year percentage variations.

From this graph, one can observe several things:

First, in the short term, the number of overall crimes did increase from 2004 through 2008. But counting from 2001 through 2008, the number of crimes are more or less stable, as a regression line drawn in the middle through the "Total" line would be nearly flat.

Why did burglary increase in 2007 and 2008? That seems to be simple enough to explain: 2007 is when the economy started cratering. Because Korean economy is extremely export-dependent, any slowdown in spending in a major market (the United States in this case) has a big impact in Korean economy. The worries over subprime mortgage was percolating in the U.S. by 2007, which mean Korea was already facing a downturn in economy. It seems reasonable to think that bad economy caused more thievery. On a related note, it is interesting that robbery decreased all the way until 2007, then picked up in 2008. It could be a sign that poverty-driven criminals (as opposed to those who commit crimes for other motives) are getting more desperate.

Third, what really jumps out from the graph is the large increase in rape cases -- nearly 50 percent increase since 2001. Why is this happening? The Korean is no criminologist, but based on his observation of crimes reported in newspapers, he has two hypotheses. First, the Korean society is becoming more sexually charged, with children getting exposed to sex at younger and younger ages, particularly over the Internet. But the Korean society's taboo against discussing sex lingers on, depriving Korean children and teens from getting adequate sex education to match the more sexualized atmosphere in which they live. This hypothesis is borne out by the fact that more reported cases of sexual assaults are committed by teens.

Also, social stigma against victims of sexual assault has been steadily decreasing in Korea. At the same time, as Korean women become more independent and self-assured, there is certainly more awareness among Korean women as to what is sexual assault and what is just something that happens at a party that you are not supposed to talk about. Therefore, more victims of sexual assault are willing to report the crime, leading to the increase in the number of reported cases. But again, these are just hypotheses.