At the first sign of Barack Obama doing something big and disputed like the healthcare reform, political discourse in America has been getting uglier and uglier such that utterly stupid people are dominating the news.

First, we have the birthers, like this lovely lady right here:

What is a "birther", you ask? This New York Times article gives a nice overview of the history of "birther" movement:

“Birthers, for the uninitiated, is a term used by the media to ridicule
those who believe that the president’s Hawaiian birth certificate is fake and
that because he was ostensibly born in Kenya, not the United States, he was
never eligible to be president in the first place.”

Prominent media figures like Lou Dobbs and Rush Limbaugh have taken the birther movement seriously enough not to dismiss it out of hand, although there have been "scores of embarrassing legal defeats, and even after tussles between the attorneys who’ve turned frivolous lawsuits about the president’s citizenship into full-time jobs.”

Then there are those who oppose Obama's healthcare plan for utterly stupid reasons. Mind you, while the Korean would like to see a single-payer health insurance system like the one Korea has, he is fully willing to recognize that there are two sides of the debate, and those who oppose a government-sponsored program definitely have serious and valid arguments.

But then there is this kind of people, who contribute nothing to the debate:

At a town hall meeting held by Rep. Robert Inglis (R-SC), someone reportedly
told Inglis, "Keep your government hands off my Medicare." "I had to politely
explain that, 'Actually, sir, your health care is being provided by the
government,'" Inglis told the Post. "But he wasn't having any of it."

Or people who say this:

“This is about the dismantling of this country,” Katy Abram, 35, shouted at Mr.
Specter, drawing one of the most prolonged rounds of applause. “We don’t want
this country to turn into Russia.”

The Korean wishes this type of stuff was limited to a small number of delusional people. But no -- even politicians as prominent as Sarah Palin (don't laugh -- she is still prominent) drops this gem:

“The America I know and love is not one in which my parents or my baby with Down
Syndrome will have to stand in front of Obama’s ‘death panel’ so his bureaucrats
can decide, based on a subjective judgment of their ‘level of productivity in
society’ whether they are worthy of health care.”

Gee, where has the Korean seen all this before -- people buying into crazy conspiracy theory that has little basis on fact or logic, spurred on by media and politicians. It all seems so familiar... 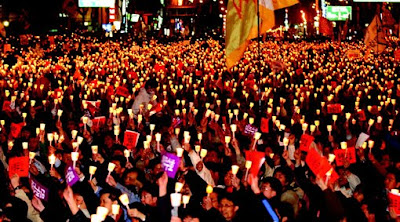 Oh geez, the Korean remembers the American expats in Korea who just loved skewering those Mad Cow protesters. How Korean educational system bred citizens with lack of scientific knowledge and critical thinking; how Koreans are dumb lemmings who would be fooled into anything; how this could only happen in Korea, the land of stupid retards.

But as to those Americans who just could not get enough to calling Koreans stupid, the Korean only has this to say: WHO'S STUPID NOW, BITCHES? At least Mad Cow Disease was real, no matter how unlikely it was; Obama is a certifiable American citizen, and there is no chance that is not an American citizen. I hope your hat is fucking delicious.

[And before you say anything about how there is not yet massive protests by birthers or idiotic opponents of healthcare -- put them in a country where half of the population live in one single geographical area that is connected by the fatest Internet in the world, the most extensive cell phone network in the world, and extremely efficient mass transit, and see what happens.]

Got a question or a comment for the Korean? Email away at askakorean@hotmail.com.
Posted by The Korean at 10:48 PM