This isn't a strictly Korean question, but whenever there is a protest in another country, they always show the police beating the crap out of the protesters and I swear they always show the same stock footage of a tear gas canister smoking, a kid wearing his scarf as a mask throws it back at the cops. But they always call them student riots – are the journalists just too lazy to ID the specific group?

The Korean is only qualified to speak about Korea, so within the context of Korea -- yes, the protesters are generally students.

Why is it always the students who are involved in these protests? The Korean’s own theory is this: students are always in the heart of a revolutionary change (for better or worse) because they are educated enough to know the general state of the world, untied enough to dedicate themselves to a cause that does not directly benefit them, and leisurely enough to have the time to spend on those causes. Uneducated people only concerned with their immediate survival cannot dream of anything greater. Regular folks with regular jobs are too busy to plot any revolutionary change, and sacrificing one’s family on top of oneself is too tough a challenge for most people.

Fitting this pattern exactly, student protests in Korea have an illustrious history. Student protests played an integral role in Korea’s independence movement against Imperial Japan. The March 1 Movement, the greatest display of Korean independence movement on the civilian level, would not have been possible without a wide-scale participation from students of Korea. Notably, Yu Gwan-soon, the heroine of March 1 Movement, was a student at Ewha Womans School.

Student protests in Korea also played an indispensable role in democratizing Korea as well. The first South Korean president was Syngman Rhee, a Princeton graduate who led the Korean independence movement in the United States. However, once became the President, he soon began rigging elections and constitutional amendments such that he could be the president for his lifetime. (The Korean has no doubt that similar type of stuff will go down in Afghanistan and Iraq as well – that’s what happens when democracy is externally imposed on a country that has had no democratic tradition.)

After 12 years of dictatorship, Rhee once again rigged the vice presidential election in 1960, which became his last straw. Student protests began sporadically in March 15, 1960, which was brutally put down by the police and hired political goons. Many people were killed or disappeared. On April 11, the body of Kim Ju-Yeol, one of the disappeared student protestors, was discovered floating on the harbors of Masan. Although initially his cause of death was announced to be drowning, when the protestors stormed the hospital, they found Kim’s body with his skull split by a tear gas shell that went from his eye socket to the back of his skull. Massive nationwide protests followed, culminating at April 19, 1960, which led to President Rhee’s resignation. 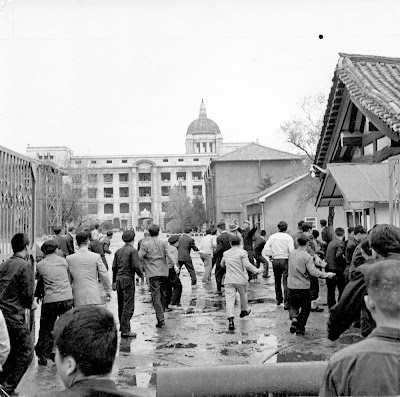 [Picture on April 19, 1960. Protesters are storming the presidential residence.]

But Korea’s democratization still had a long way to go. Korea would go through at least three more dictators after Rhee, whose rules were equally authoritarian and brutal. Thus, student protests were a fact of life in Korea all the way up to late 1980s/early 1990s. Students also played a vital role in the most massive protest since the April Revolution: the May 18 Movement, in which several hundred died at the hands of paratroopers sent to suppress the protest in Gwangju in 1980.

The fact that those protests occurred is undoubtedly positive. Without those protests, democracy in Korea did not happen. Because the Korean people fought against the illegitimate dictatorships for themselves, the protests endows the current democratic government a certain legitimacy that an externally imposed democracy could never have.

However, whether or not it is a good thing that the tradition of protests has survived to this day is debatable. Although far from perfect, Korea has a fully functional democracy. When groups of people have a dispute, the institutional mechanisms are present and functional to resolve that dispute in an orderly manner within the democratic system – e.g. through the legislature, courts and elections in the long run.

But the sweet, sweet temptation of protests, which would skirt the institutional process, is constantly present in contemporary Korean politics. It does not help that many of Korea’s current politicians cut their political teeth when they were students, protesting against the authoritarian government. After all, going through the institutional process takes too long, and any change from that process is likely to be incremental. On the other hand, the results of protests are achieved quickly – governments often have capitulated in the matter of months. And when protesting did work, the result was sweeping rather than incremental.

For impatient people who want immediate, large-scale social change – and really, Koreans are nothing if not impatient – protesting is much more attractive than counting on the democratic institutions to serve their functions. Furthermore, it is at least arguable that large-scale protests reflect the popular will, and following such popular will is indeed democratic. For these reasons, the protesting culture in Korea is quite alive and well, although the protests themselves have become much more orderly and peaceful compared to their heyday in the 1980s.

Got a question or a comment for the Korean? Email away at askakorean@hotmail.com.
Posted by The Korean at 10:21 PM