Through Part I and II, we surveyed how Korean men serve their military duty, and what happens during the years spent serving. The next question is – how does this experience, common to most Korean men, affect the shaping of Korean society?

Part II left off at the life lessons that Korean men learn through their stint at the military. The Korean noted that the military experience builds Korean men’s tolerance for dealing with arbitrary crap that results from a hierarchical organization that requires unquestioning loyalty. The Korean also noted that our adult lives is full such situations in which we simply must grin and bear with the crap that we do not wish to deal with.

Nowhere is the latter statement truer than in Korea. In fact, one can argue that the military culture neatly coincides with traditional Korean culture – in both cultures, seniority automatically commands respect and loyalty. It is not surprising, then, that Korean workplaces are often run just like a squad in the military. You do what your boss tells you to do, and you are supposed to grin and bear it. Your time will come because Korea, like Japan, had automatic advancement by seniority at least until 1990s. Once you are the boss, you can order people around, much like the way you can order people around once you put in the time and became a sergeant.

In fact, one can make an argument that having this type of corporate culture was a key ingredient in propelling Korea into the forefront of economic development. The start of Korea’s economic development began with light industries, such as making cheap clothes, wigs, and shoes in sweatshops. Then from 1970s to mid-1990s, the main engine for Korea’s economy was heavy industries – shipbuilding, petroleum refining, steeling making and the like. Each stage of the development, first and foremost, required a well-disciplined workforce who was willing to take orders and follow them.

And boy, Koreans could follow those orders. The stories about how hard Koreans worked in the 70s and 80s often defy belief. The unofficial motto of Hyundai Heavy Industries, 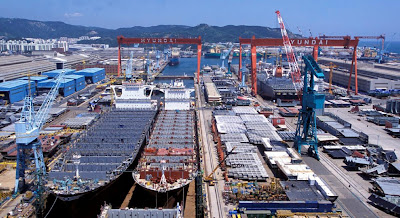 currently one of the world leaders in shipbuilding, was: “We work 5 [a.m.] to 9 [p.m.] when other countries work 9 to 5.” The only people who work this type of hours in America, arguably, are investment bankers who earn six figures, or desperately poor people working two or three jobs. But in Korea during those times, it was the whole country working those hours without a complaint. Every man going through the military, it can be argued, instilled this level of discipline that served Korea well during this time.

However, the downside of the military experience is equally significant. The hierarchy-oriented Korean men do not stop being that way once they are done with work. Therefore, social life in Korea, especially before 1990s, was very stuffy and authoritarian everywhere.

More importantly, Korean men who went through the military experience tend to become completely insufferable – like the worst Red Sox fan before they won the World Series in 2004. Like the Korean noted in the earlier series, the military experience in Korea is no picnic. It involves significant sacrifice both physical and mental, not to mention the two to three precious years of youth. To justify this sacrifice, military duty has been elevated into a sacred status; it is commonly referred to as “the holy duty of national defense”. Because there is such a strong sense that the military duty is a massive sacrifice, there is nearly a witch-hunt of those who do not serve; instant ruination awaits prominent figures who do not serve.

For example, some Korean men refuse to serve based on their religious commitment for pacifism – usually Jehovah’s Witnesses. Because they are lumped into the same group as draft dodgers, the standard practice is to put them in prison for as long as they would have served in the military. In other words, sincere pacifists in Korea have no choice but to become an ex-con. Even a proposal for “alternate service option”, such as community service at a hospital for example, does not gain much traction for fear that religion may be used as a cover for easier military service.

Another example is 2002 presidential election in Korea, in which Roh Moo-Hyun won in a surprise victory. While there are many factors that led to the opposing candidate Lee Hoi-Chang’s loss, one of them is the revelation during the campaign that one of Lee’s sons did not serve the military duty for being underweight – a highly suspect excuse. Essentially, (for those who remember the 2004 American presidential election,) the military service issue was Roh’s Swift Boat that torpedoed Lee’s chances. Since then, it became inconceivable for anyone with aspirations for a public office to not serve or not have his sons serve in the military.

Interesting offshoot of this phenomenon is that military experience becomes fuel for sexism. Remember that Korean men believe that they made an incredible sacrifice by serving in the military. (And to some extent, that is true.) So whenever women demand more equal rights, a standard, pithy answer from men is: “Have you been to the military?” For example, a few years ago Korean government abolished the bonus points given to those who served in the military in hiring government workers, based on the reason that it is unfair to women. The decision nearly caused a riot, and is still a very popular fodder for anti-feminists in Korea.

That concludes military service series. Hope you enjoyed it.

Got a question or a comment for the Korean? Email away at askakorean@hotmail.com.
Posted by The Korean at 10:54 PM