WTFFFF was the Korean manager thinking when he decided to pitch to Ichiro in the WBC Championship with 2 in scoring position and 1st base OPEN in extra innings!?!? Anybody with any remotely miniscule knowledge of baseball knows that when you are facing Ichiro with game on the line with 2 outs and 1st base open, you WALK the guy!


Since I assume that the Korean manager knows baseball, I have to also assume that pitching to Ichiro was only about one thing - Korean pride. To which I say, wtf!! Win the damn game and then feel proud, who cares whether you strike out Ichiro or not?!? As a Korean who's been around the world, I have to say that while Korean pride may begreat and all that, seriously, nobody else in the world cares. IfKorea is to become truly world-class, Koreans (especially Korean men) need to get over it, even when it comes to Japan. Or else, just keep pitching to Ichiro in extra innings with 2 on and 2 out and 1st base open, see what happens next time.

Now that the Korean is done crying himself to sleep, let us calmly assess the situation.

First, you are not alone in thinking that it was the nationalistic pride that made Team Korea refuse to walk Ichiro. East Windup Chronicle, the finest blog covering East Asian baseball, essentially agrees with you, with this upshot:

In the mind of [Team Korea manager] Kim In-shik to walk the reviled Ichiro was to lose face. Even with Hiroyuki Nakajima (hitting .222 for the WBC) on deck, even with first base open and two outs, even with his closer having already thrown over 30 pitches, Kim (since he’s likely calling the pitches from the dugout) came at Ichiro with several more pitches before the eighth was lined into centerfield.

But after some reflection and post-game analysis, the Korean would disagree. First, straight from the horse's mouth, In-Shik Kim said he gave a sign to the the pitcher Chang-Yong Lim to walk Ichiro, although not necessarily through an obvious intentional walk. Lim said he did not see the sign.

So at two pitches before Ichiro singled (at which point the first base was empty), the count was 1-2. At this point, the Korean thinks Kim's sign makes perfect sense. One more strike, and Ichiro was gone and the inning was over. So keep throwing out of strike zone at him -- perhaps a high heat at the chest level -- and maybe Ichiro chases it. If he does not, Team Korea does not face Ichiro. Intentional walk would be less than best in that situation. After all, Lim was ahead in the count. Intentially loading the base is never a good idea, although it may have been marginally better than facing Ichiro, who had been hitting hot in that game. So less-than-intentional walk was the most rational decision to make, which makes Kim's story credible.

As to why Lim did not see Kim's sign, the Korean's personal opinion is that it was probably not about nationalistic pride, although Lim did say he wanted to go against Ichiro. While nationalism is a strong force in Korea, it is hardly the be-all and end-all, as the Korean wrote previously. Team Korea is professional; they do what it takes to win. However, we will probably never know why, until some time in the future when a member of Team Korea decides to write a tell-all book.

The Korean thinks the critical error in decision by Kim was not the fact that he did not give a clear intentional walk signal, but the fact that he left Lim in for the 10th inning. Especially by the time Lim was facing Ichiro, he looked gassed. Lim is a good pitcher, but he is a right-handed pitcher facing one of the greatest left-handed hitters in baseball history. This would have been the perfect time to employ a LOOGY, and Team Korea had plenty of those including the excellent Kwang-Hyun Kim -- his disastrous Tokyo Dome debut aside.
At any rate, the Korean is man enough to admit that the better team won the game. Team Japan pitched better and hit better. Team Korea's otherworldly defense was the only thing that held the game together, but eventually even the best defense will give way to constant hitting. Team Korea's best chance came and went at the bottom of the 9th, when the slugger Kim Tae-Kyun was replaced by a pinch runner. Even if Team Korea somehow survived Ichiro in the 10th, it was highly likely that Team Korea simply would not have had enough firepower at the bats to score any further.
All in all, it was a scintillating game. The Korean lost interest in baseball quite some time ago, but he would come back in a heartbeat if even a quarter of MLB games were like this one. Until then, the Korean will be watching the Lakers. 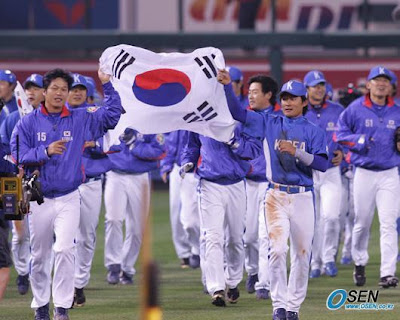 Here's what I saw Monday night:

... Japanese left fielder Seiichi Uchikawa skidding to cut off a sharply hit ball in the corner later in the fifth, and then popping up and firing to nail Korean second baseman Young Min Ko at second base -- a play from start to finish I cannot imagine a single current major leaguer even attempting, let alone pulling off.

Japan collecting 13 singles and 15 total hits, but Korea making them strand 29 runners, twice stemming the tide with critical 5-4-3 double plays, the second of which featured a stout, quick turn and was, in the words of one of my colleagues in the press box, "a legitimate 180-footer like you almost never see."

- Did you notice how the WBC announcers were constantly talking about the military service that some members of Team Korea must face? See the post below. Is there any doubt that AAK! always addresses the most up-to-date Korea-related topics?

- Korean sluggers are huge. Tae-Kyun Kim, the first baseman, looked twice the size of Ichiro when Ichiro was on the first. As Dae-Ho Lee stepped in as a pinch hitter, the announcers said, "For pinch hitter, we have a huge human being -- 6-foot-4 Dae-Ho Lee." The Korean is sad to say that his next thought hearing that line was: 'steroids'. No, the Korean probably can't watch baseball anymore.

- It is a travesty that Matsuzaka won the MVP, and not Ichiro.

- USA has no excuse losing. And screw you Joe Morgan for insisting that it is "too much to ask" for MLB players to work out and stay in shape for WBC prior to the regular season. Um, isn't Team Japan also littered with MLB players who managed to stay in shape and eventually won the whole series? Be more like David Wright, who said "We knew what we were getting into." That is accepting responsibility like a real man.

-EDIT 4/1/2009 11:18 p.m.- It just occurred to the Korean: where would this game fall in Bill Simmons' 16 Levels of Losing? Feels like this game all the elements from Princeton Principle (Lv. 16), Alpha Dog (Lv. 14), Monkey Wrench (Lv. 10), and The Guillotine (Lv. 4). After much deliberation, the Korean would pick Alpha Dog. In the end, the difference was Ichiro, and Team Korea was not going to stop him. The Korean just suffered an episode of severe ulcer writing that sentence.
Posted by The Korean at 10:20 PM