Ask a Korean! News: Two Korean Americans Do Something Awesome

First, Dr. Jim Yong Kim of Harvard Medical School was appointed the President of Dartmouth College. He co-founded the Partners in Health, and is renowned for his work at the World Health Organization. 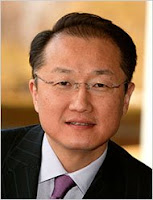 Dr. Kim is an immigrant, having moved from Seoul to Muscatine, Iowa, where his was one of only two Asian families. He attended Muscatine High School, where he was valedictorian, president of his class and quarterback of the football team. He attended Brown University. AND he went onto become a doctor, with M.D. and Ph.D. from Harvard! Good thing he did not live around other Korean American students -- he would have caused all Korean mothers in the area to to peck away at their children.

Second, Sam Yoon, City Councilor of Boston, is running for mayor. He is seeking to unseat Tom 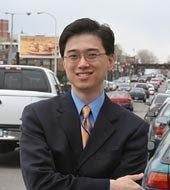 Menino, the current mayor who has been in that position for 16 years. City Councilor Michael Flaherty and Kevin McCrea are also in the race. Pundits give Yoon a solid chance to win. According to Paul Watanabe, a political scientist at University of Massachusetts Boston, Yoon "reflects the new Boston. He’s young, there’s a freshness that transcends age. He has a look that reflects the new look of the city and that gives him credibility."

The Korean met Mr. Yoon when he visited New York for a fund raiser. He found Mr. Yoon to be very energetic and optimistic. Visit Sam Yoon's webpage here. Donate to his campaign here.

Got a question or a comment for the Korean? Email away at askakorean@hotmail.com.
Posted by The Korean at 8:25 AM