The past weekend was Lunar New Year (the 18th, to be exact). If you call it Chinese New Year, the Korean, along with the Vietnamese (whoever and wherever s/he may be) will kick your ass. Just like Christmas is not European Winter Solstice, Lunar New Year is not Chinese.

Lunar New Year is called seol-nal in Korean. It is also called gu-jeong, in contrast to shin-jeong (the Solar New Year, i.e. January 1st.) Lunar New Year is a national holiday, and in fact it's one of the only two holidays in Korea in which people get three days off. (Chu-seok, the Harvest Festival, is the other one.)

A lot of things happen in Lunar New Year in Korea. The most notable one is the mass exodus of people from Seoul to the rest of the country, since you are supposed to go back to your hometown and hold a service (je-sa) for your ancestors. The Korean's hometown (which is actually the Korean Father's hometown) is near Daejeon. Normally it takes about 1.5 hours to drive from Seoul, but we have taken as long as 5 hours getting to the old house at one point. 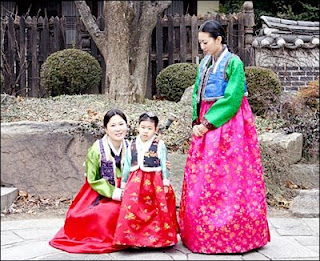 Sometimes people will wear traditional Korean clothes. (Traditional Korean clothes are called han-bok, but the clothes you wear on the new year's day is called seol-bim.) More generally, every one eats rice cake soup, or ddeok-gook. (Pictured below.) Apparently, unless you have ddeok-gook on new year, you don't turn one year older. (The fact which, the Korean thinks, would have encouraged Koreans to stop eating it.)

Often, seol-nal rivals Christmas as children's favorite holiday because of se-bae. Se-bae is a traditional deep bow (jeol) to your elders (click on the picture to see the motion), and the elders are supposed to give the children who bowed money (called se-bae-don.)

The amount of se-bae-don varies widely; the Korean Extended Family is generally dirt-poor, so the Korean as a child would usually get about 1000 won (=$1) per bow, netting out at around $30 at the end of the season. On the other hand, other children at the Korean's school (which was in a very rich area) would usually earn around $150, and sometimes as much as $1000. According to news reports, the current going rate for middle school children is apparently at about $20. 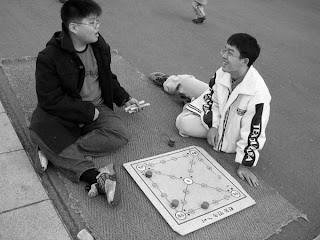 The fan-favorite is yut-nol-i, which involves throwing four sticks and advancing your piece on the board depending on the combination of how many sticks landed on the front side and how many landed on the back. Yeon-nal-li-gi ("kite flying") is also a traditional thing to do on seol-nal.

Got a question or a comment for the Korean? Email away at askakorean@hotmail.com.
Posted by The Korean at 12:35 PM