Watch Out for that Nasty Cold! (and Happy Holidays too.)

Why is it that I've always heard Koreans (i.e. my dad and a cousin from Korea or even those Korean celebrities on those random TV shows) end conversations with some variation of "Be careful/Dress warmly/get a flushot so you don't catch a cold." I mean, I haven't heard this kind of cautionary phrase from Americans too often...is this customary among Koreans back in Korea?

Not only are you a Korean, but you are a Golden Bear! You must be one of the finest species that ever walked this earth.

As to your question, your hunch is right; it's just an expression. Think of it as a seasonal good-bye, like some beer companies make seasonal brew. (Times like this the Korean wishes he had some contacts in the market, since right there would be a nice product placement. Free beer for the Korean!) During winter, instead of saying Annyong, you can say gam gi jo sim hae. ("Watch out for cold," as in don't catch a cold.) What's really funny is that even Koreans in Los Angeles say the same thing during winter, although it never falls below 50 degrees in LA.

Koreans have a lot of great expressions and the Korean will share them as we move along. Just among the greetings, the Korean's favorite is siksa ha sheot so yo? ("Have you eaten?", a shout out to the good old days when most Koreans did not eat every day -- but you're not supposed to say "no.") Another very common way of saying good-bye is sugo ha sip si yo. ("Work hard" or "carry on." Used only when you are speaking to someone on duty, like a policeman on the street, or maybe a prostitute.)

Since this is going to the last post before Christmas, the Korean feels like an explanation about Christmas in Korea is necessary. Obviously, Christmas is not a native holiday to Korea, but thanks to the American influence over the world as well as the relentless marketing machine that operates upon gift-giving, Christmas is widely celebrated in Korea. But instead of being a nice family affair as it is in America, Christmas basically is the second Valentine's Day in Korea. (It makes sense, because Koreans have their own family-centered holidays like New Year's Day and Chusok.) Happy couples walk around brightly lit streets and exchange gifts, while singles hide somewhere and drown their sorrows.

And here's the Korean's gift for everyone (the Korean took it himself; it's Union Square in San Francisco, in December 2002): 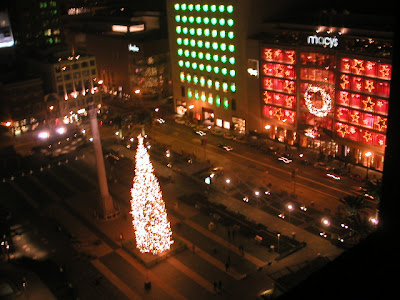