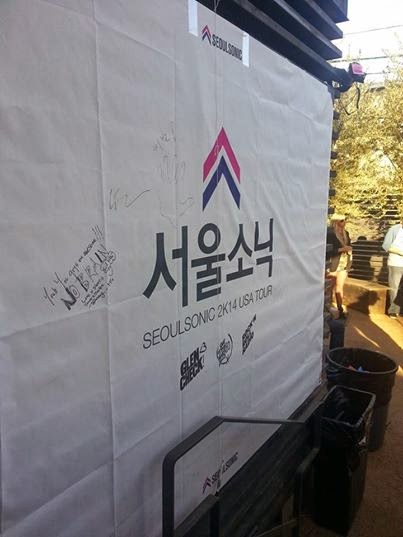 This year, SXSW has two official Korea-themed showcases: K-Pop Night Out and Seoulsonic. Although K-Pop Night Out was a highly successful event, Seoulsonic is a more mature show, as it is hosting its fourth annual U.S. tour. This year's lineup was:  Smacksoft, Big Phony, Glen Check, Rock 'n Roll Radio, Love X Stereo and No Brain. Not a single dog in that lineup. 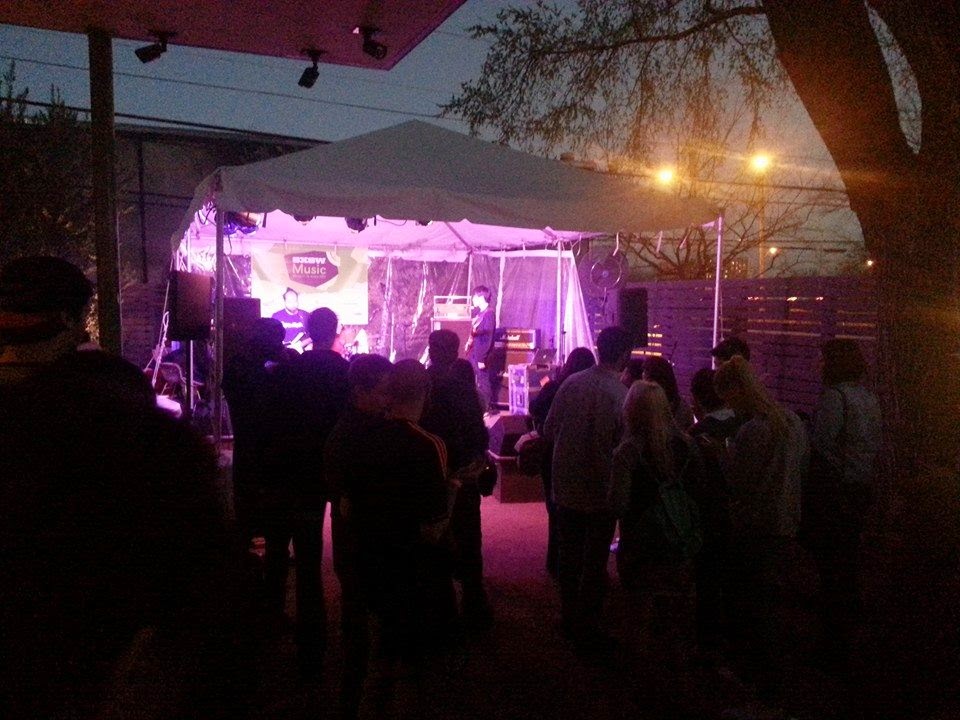 - The venue was slightly small, but chic. The stage was set up in the outdoor yard, which allowed for a relaxed atmosphere. The crowd topped out at around 120.

- The audience was an interesting group: at least 80 percent of the audience was not Korean, and the percentage is likely to be higher if one disregarded the staff for the bands and other Korean artists who were not performing at Seoulsonic in attendance. Many of the non-Korean audience spoke excellent Korean. The last time I have seen this many non-Koreans speaking such comfortable Korean was at an event for diplomatic staff and foreign policy graduate students at Washington D.C.

Most importantly, a large part of the crowd already knew everything about the bands that were performing. These guys were fans, not someone who simply wandered in during SXSW. Before the show, I chatted with a couple of young folks who were planning to move to Korea within this year to teach English and write about Korea's indie scene. Another person recognized my Drunken Tiger cap, took a picture of it and tweeted to MFBTY (who promptly retweeted.) These fans are going to be the future of international K-Pop.


- Smacksoft opened the show. Frontwoman Bo (whose full name is Hwang Bo-ryeong [황보령]) has studied and lived in the U.S. for a long time, and the experience showed. Her interaction with the crowd, in her characteristically husky voice, is natural and spontaneous. In a matter of seconds, Smacksoft's music goes from ethereal to explosive, serene to screaming. She leaves the crowd charged with energy.

- Big Phony followed next. On a live stage, Big Phony runs a type of Prairie Home Companion show--that is, folksy, soulful music interspersed with wry, self-deprecating jokes. For example, this is how one part of Big Phony's show went:

The levity works very well when paired with Big Phony's soulful, soft music. Unfortunately, the outdoor setting did not favor Big Phony's showcase, and neither did the sound system. The mics occasionally squeaked in feedback, and Big Phony's lyrics--the centerpiece of his music--were not conveyed particularly well. Regardless, Big Phony's sincere humor wins over the crowd.

- As Glen Check was about to come on, I feel a deja vu. The space became a lot tighter, the crowd hotter and buzzier. It was just like the moments before Jay Park appeared in K-Pop Night Out, the signs that the real show was about to start. No disrespect to everyone else at Seoulsonic, but the dedicated fans who came to Seoulsonic came to see Glen Check.

Glen Check did not disappoint. Their sophisticated blend of melodic rock and electronica throws the crowd into a tizzy. The equipment issue somehow worked itself out, and Glen Check sounds marvelous. All the different layers of Glen Check's complex music flowed like a gorgeous tapestry of sonic energy. Bar none, it was one of the finest performance by a Korean artists at SXSW.

- The high of Glen Check's performance carried over to Rock 'n Roll Radio's show. Of all Korean acts at SXSW, Rock 'n Roll Radio and Love X Stereo probably have the sounds that are most familiar to the American audience. In fact, Rock 'n Roll Radio looks like three Korean Nick Cannons, down to their skinny jeans, tight-fitting blazers and sunglasses. RnRR's rollicking music kept the groove going.

- It was midnight by the time Love X Stereo got on stage, and the hitherto friendly venue began showing an unanticipated flaw: because it was outdoors, it was getting very cold. The energy level began dropping toward the end of Rock 'n Roll Radio's set. After 20 minutes of sound check, the crowd suddenly thinned out for Love X Stereo, as people huddled indoors for warmth. I myself had to step inside as well, opting to watch the band through the glass door. Through no fault of their own, Love X Stereo ended up slightly wasting a good performance.


- After Love X Stereo's set, I genuinely began to worry for No Brain. One of the first punk rock bands of Korea, right up there with Crying Nut in terms of its footprint in K-Pop history, deserved better than a small, shivering crowd that was too cold to rock out.

My worry was misplaced. No Brain did not thrive for nearly two decades by being a live performance slouch. No Brain's first several high-energy punk rock numbers were enough to draw out the crowd from inside the building. And then this performance happened, only with a real bottle of soju:

Single-handedly, No Brain resurrected the show. Everyone was back out in the courtyard, deliriously jumping and screaming their hearts out. With No Brain's encore song, Seoulsonic wasn't over until 2 a.m. Another successful showcase at SXSW.

Got a question or a comment for the Korean? Email away at askakorean@gmail.com.
Posted by T.K. (Ask a Korean!) at 4:09 AM