SXSW was drawing to a close on Sunday. Rather than seeing the last few showcases, I decide to follow the five Korean bands' show at San Antonio, a 1.5-hour drive from Austin.

After picking up my travel mates, we first head over to Salt Lick barbecue, considered one of the best barbecues in Texas. Salt Lick was located about an hour away from Austin, at a town called Driftwood, Texas. I could hardly think of a more appropriate name for a Texas town with fine barbecue. We get there just in time to beat the massive lunch crowd. 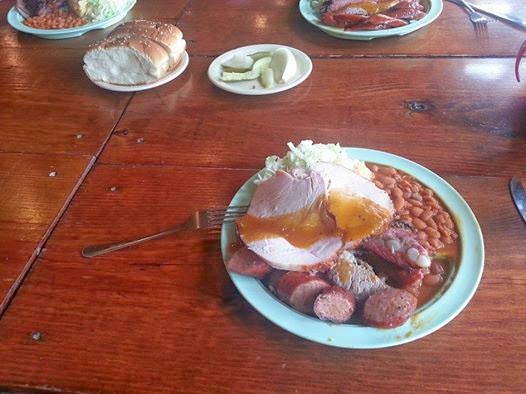 The verdict? It was a phenomenal barbecue, but Franklin barbecue was a little bit better. Salt Lick's side dishes were better than Franklin's, but really, do you go to a barbecue place to eat side dishes?

We get to San Antonio. Right away, we head to the Alamo and the Riverwalk. The heart of San Antonio is gorgeous. I had expected much worse from the Riverwalk, as the canals of Venice are filled raw sewage. On the contrary, the Riverwalk was beautiful and clean, with a nice atmosphere surrounding it.

But the mood quickly darkened once we got to the venue. The venue itself was neat: it was a grungy, warehouse-looking joint with old school video games and good beer, appropriate for a small rock concert. Problem was that the venue had nothing around it. Worse, there was no one around it. No passing cars, no foot traffic, no open business. We try to find a place to have dinner, but could not find an open restaurant until we drove back to the Riverwalk area. It dawns on me that San Antonio is like Baltimore with less crime: a beautiful core and desolation outside of it. I recall a promoter telling me that Korean bands have not tried anything like this (i.e. putting on a multi-act showcase in a mid-sized city) before. And it was going to be a five-hour concert on Sunday night. My mood becomes grim and desperate.

Fortunately, people did gather: the crowd eventually grew to around 40 people. I recognize a number of them from the SXSW showcases; I can't decide if that is a good thing or a bad thing. Regardless, the five Korean bands--Jambinai, Love X Stereo, Smacksoft, Big Phony and Crying Nut--put on a great show. Since I have written about all of them at least once before, I will give just the highlights:

- Bo from Smacksoft announced to the crowd:  "I learned how to do twerking last night."

- Big Phony was ill, but still sounded great. Somehow, that made him more endearing to the women in the crowd. At one point, all the women in the bar were right up on the stage, while all the men were hanging back.

- Before Crying Nut came on, I speak with one young woman who said Crying Nut was not her style. I tell her: "Just watch them." In the middle of Crying Nut's performance, she charges the stage. The lesson: never doubt Crying Nut.

The crowd stayed strong all the way until the end of the show, which was well after midnight. It was past 2 a.m. by the time I returned to my hotel room in Austin. The end of my SXSW adventure.

Got a question or a comment for the Korean? Email away at askakorean@gmail.com.
Posted by T.K. (Ask a Korean!) at 7:41 PM