I am a Swedish woman originally adopted from Korea. I know that a lot of children in Korea have been adopted to western countries since the 1950's and I am curious of how Korean people in general view this - the driving forces of the adoptions, foremost within Korea, is there an active discussion for example? I am aware that there might be as many views on this as there are Koreans, but I am interested in the general discourse on the topic.

I'm a Korean adoptee who is returning to Korea for the first time to adopt my own daughter. I've heard a lot of scuttlebutt that there's a stigma against adoption in the motherland. So, I wanted to ask you what really is the Korean attitude towards international adoption? Will I be looked down on upon my return?

I have a few questions to you concerning how Koreans think and feel about people who have been adopted away from Korea. Myself, I am a 28-year old woman living in Norway. I was born in Korea, but adopted to Norway at the age of 5 months. There are actually quite a lot of Korean adoptees here, and quite a few are quite curious about going back to the biological country, and even finding their biological family. For me, that's not really an issue since I feel 100% Norwegian, and I think I would only feel uncomfortable about going back to try to find a link there which just isn't there. However, my question is how the citizens of Korea feel about people who have been adopted from Korea, both those who return to find their lost past, and those who really don't care about their birth country. Are there any sympathies, prejudices, or things Koreans are curious about?

I am an adopted South Korean raised in Minnesota USA. I have never visited the Fatherland as an adult but I want to soon. When I go to South Korea, is it true they will know by just looking at me that I am an American? Will I be shunned, ostracized, belittled by native Koreans because I do not know their language or culture, and because I am an American?

One of the more gratifying aspects of running AAK! is that the Korean is serving as a liaison for many Korean adoptees to Korean culture. It is a sobering responsibility that always makes the Korean think twice about what he writes. 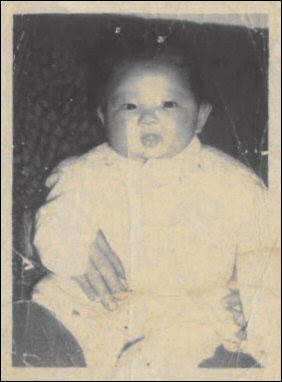 Picture of a Korean adoptee (source)

The Korean previously wrote about how Koreans may perceive non-Koreans who adopt Korean children. But what do Koreans think about the adoptees themselves?

The best answer is: nothing. For better or worse, international adoption has never been featured as a big topic of discussion within the Korean society. There has been some discussion about the responsibility that the Korean society owes to orphans, and what a shame it is having to export babies rather than take care of Korea’s own children. Once in a while, there would be a human-interest feature on television or newspaper about kind-hearted non-Koreans who adopted a number of Korean children, or the journey of Korean adoptees trying to find their roots. But they do not draw much attention – Koreans just have more pressing issues to deal with in their society.

This means that on an individual level, the sentiment toward adoptees may vary widely – some people may have given a lot of thoughts on the issue, and others not at all. But generally, people realize that adoptees did not have much choice about the fact that they were adopted abroad. Therefore, broadly speaking, people would be sympathetic toward adoptees visiting Korea. In fact, news organizations and other non-profit organizations often sponsor adult adoptees to visit Korea and locate their birth parents if possible. There is also an annual event where a number of non-profit foundations in Korea invite more than 400 adult adoptees from 15 countries to visit Korea and experience Korean culture, visit their hometown, etc.

What does this mean on the ground level, i.e. when you are traveling in Korea? At this point, allow the Korean to expand the topic beyond adoptees who wish to travel Korea:

The Korean is always amused by people who think that Korea is this mystical, tradition-bound place where a single heretical move or remark would cause people on the street to hurl stones at them. Please – enough with the “How will I be treated if I traveled to Korea” questions! Korea is a regular place where regular people live. Most people are too busy with their own affairs to care about some tourist who won’t affect their lives in any meaningful way. Storekeepers are concerned with the bottom line, and they will sell you things if you have money for it. (Imagine that!) You might get stared at a little if you look really different from the locals, but so what?

STOP SENDING THOSE QUESTIONS. Seriously. Your teachers lied to you – there are such things as stupid questions, and those questions are stupid. The Korean has flamingly gay friends who traveled all over Iran. Miraculously, they were not stoned to death! (Instead, they report that there is a vibrant, if underground, homosexual culture in Iran as well.) Of course, you have to use your common sense. Tourists are targets of crime anywhere in the world. Drunken men might harass you from time to time. You might be overcharged for some things. It is a bad idea to walk around at night on your own in dark places. But really, if two gay dudes who made a habit of making out in the streets of Tehran can safely travel Iran, you can safely travel Korea no matter what you happen to be.

Got a question or a comment for the Korean? Email away at askakorean@hotmail.com.
Posted by The Korean at 11:56 PM