Dear Korean,
I pay nearly zero attention to football, but judging from what I remember of the game in junior high, my hunch is that any East Asians who end up playing will either be half-breeds or scrubs unless there's a large contingent of kimchi-eating hulking ogres that I don't know about. Where, exactly, are teams anywhere going to find East Asian football players who aren't scrubs/diversity hires?

Common misconception about football is that it is game only played by giant men. But that cannot be farther from the truth. For a good athlete, there is always a place in the football field regardless of size.

Take, for example, Steve Smith of Carolina Panthers, currently one of the best receivers in NFL. He is at modest 5' 9", 185 pounds. But with his speed and elusiveness, he simply dominates the 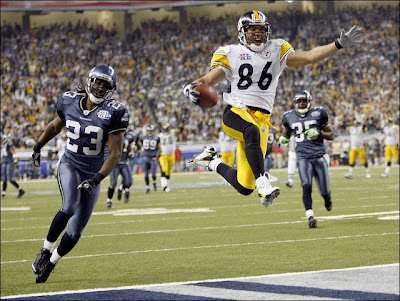 opposing corners. Similarly, Warrick Dunn -- a fine running back when he was younger -- is 5' 9", 187 pounds. Hines Ward, receiver for the Pittsburgh Steelers and the finest Korean in NFL, is also not very big -- 6' 0", 205 pounds. Such physique is not difficult to find among East Asians. The Korean himself is 6' 1", 190 pounds.

Accordingly, Asian Americans have had some success in football in the past. Dat Nguyen, a Vietnamese American, played middle linebacker for Dallas Cowboys from 1999 to 2006 and played a Pro Bowl-caliber season at 2003. On college football level, Timmy Chang of University of Hawaii holds the NCAA Div. I-A record in total offensive yards and career passing yards.

Here is an example. Last summer, the Korean attended a charity soccer game in New York featuring Thierry Henry and his good friend Steve Nash of the Phoenix Suns. Henry is one of the 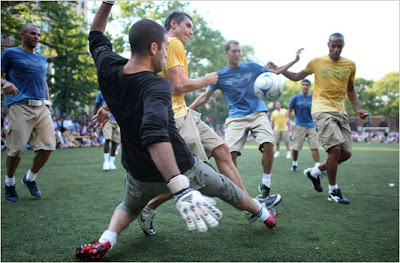 best footballers in the world, and the other soccer pros were not too shabby either -- Robbie Fowler of the English national team, Claudio Reyna from the U.S. national team, Juan Pablo Angel of the New York Red Bulls, to name a few. But playing with them were a number of NBA players -- Nash, Leandro Barbosa and Raja Bell of Phoenix Suns, and Jason Kidd of Dallas Mavericks, and Baron Davis of Los Angeles Clippers.

Watching that game made the Korean realize that NBA was very lucky that Nash, Barbosa, Bell, and Kidd chose basketball and not soccer. (Baron Davis did not know much about soccer and essentially provided comic relief by goofing around in his baseball cap and glasses.) Boy, the four NBA players were GOOD. Clearly, Henry was a cut above everyone on the pitch, and was not trying very hard. But against the rest of pro soccer players, the NBA players were going toe-to-toe. Steve Nash in particular likes to speak about how soccer influenced his court vision as a point guard. If Nash had chosen to play soccer for his career, NBA would have missed out on a two-time MVP.

Similarly, East Asians are simply not exposed to football right now. The best East Asian athletes play baseball or soccer. But with enough exposure, that can change. Football is a game of specific, defined roles. And there is always a role for any good athlete, regardless of size. For all the grief that the Korean gives to Chan-Ho Park, he could have been a good quarterback if he was exposed to football in his youth. At 6' 2", Park is tall enough to look over the offensive line, and he does have a cannon of an arm. 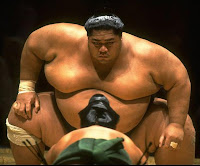 Not necessarily kimchi-eating ones, but how about sushi-eating ones? Sumo wrestlers could make great NFL linemen. The Korean was once stuck in Narita Airport for about 5 hours, and he spent most of it staring at sumo matches showing on a big screen. After a few hours of sumo, the Korean realized that sumo techniques -- the footwork and the use of hands and arms -- were very similar to offensive linemen techniques.

The opportunities are there to expand the reach of football to the world. The Korean wishes to see the game attracting the world's best, not just America's best. The Korean will reiterate: a franchise in Los Angeles would be a huge step to that end. Bring an NFL franchise to Los Angeles NOW!!