Why do Koreans love coffee so much? I went to Korea as an exchange student couple of years and ago and was amazed at how much and often Koreans drink coffee. I'm not much of a coffee person and when I either declined or told people I didn't drink coffee, they looked at me as if I had told them that I had 15 toes!

The Korean does not drink coffee either – it hurts his stomach. So everything about coffee in this post is basically hearsay from Korean people who actually drink coffee.

Coffee was first introduced to Korea in early 20th century. There is record indicating that the last king/emperor of Joseon Dynasty had coffee at the Russian embassy. The general public started drinking coffee around 1920s, when coffee shops began to appear. But the popularity of coffee really took off after Korean War, when instant coffee in U.S. military ration came into Korean society.

Like you said, Koreans LOVE coffee. Many Koreans drink it after every m 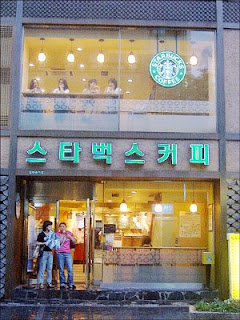 eal, and in between meals. Compared to what Americans drink, the coffee that most Koreans prefer tastes watered down, with excessive amount of coffee creamer and sugar. Americans in Korea bitterly complain that Starbucks is the only place to get any decent coffee in Korea.

But why do Koreans like coffee so much? To be sure, it’s likely that people all over the world like coffee in general. The Korean is yet to find a country that categorically rejects coffee drinking. Rather, each country has its own preferred coffee flavor and rituals.

The Korean’s best guess – for which he has no empirical data to back up with – is that coffee fit nicely into Korean people’s eating habits. Korean people regularly drink tea while entertaining guests, so coffee would have been an easy replacement. Koreans also traditionally had soong-nyoong (water boiled in rice pot with scraps of rice left over – sounds unappetizing written that way, but absolutely delicious) after meals, so coffee easily replaces that as well.

Funny thing is that although the way Korean people enjoy coffee is nearly unlike any other in the world, Koreans regard their coffee-drinking habit as decidedly foreign. That is probably why you got funny looks from Koreans when you said you don’t drink coffee. Because how could it be – we are drinking American beverage, and someone from America does not drink coffee? Surely it is absurd, like a Korean who does not drink soju.

Got a question or a comment for the Korean? Email away at askakorean@hotmail.com.
Posted by The Korean at 12:18 PM