The Fastest in the East

안녕하십니까? Why are Koreans in a rush all the time? Like at elevators and subways, people get on before people get off... isn't that like Social Etiqutte 101? And Koreans (esp. men) eat fuckin' FAST! (I hear this has something to do with 군대.) I remember a lot of 유학생 back in the States would be running all over the place at grocery stores. Don't they know grocery shopping is supposed to be a leisurely experience? Are they in a hurry to get back to their apartments to study?

Although it has been getting better in the last decade or so, the social etiquette in Korea is still MIA at times. It's because still for many Koreans, (generally older people,) it is their first time living in a megapolis like Seoul. It doesn't occur to them that there are extra sets of etiquette required for a crowded living. But truthfully, it's not that big of a problem anymore -- it used to be really bad until the 80s.

If you are curious about what Korea used to be like, you should visit China. When the Korean visited China, the only way to keep people from blatantly cutting in any line was to close my fist, raise it, and stare down the would-be cutter. Unfortunately, that didn't work for spitting mucus and chicken bones on the street.

A related side story: a while back, the Korean visited Disneyland with his three friends. We were in a line for Star Wars, and we began to notice this one group of obviously-mainland-Chinese kids, probably around high school age or so. They used to be next to us on a folded line (so kinda far back,) but now they were just a few spots behind us. We observed, and their method was this: squeeze a small girl up front past other people, who establishes some space in the line, and the rest of the group (maybe 4 or 5) comes in to join the girl.

Upon seeing this, we decided to have some fun. Four of us stood so that we were forming an L, with the long side of the L facing that group. The space in the middle of the L was a delicious piece of cheese for those line-cutting rats. Sure enough, the small girl made a move, snuck in, and stood in the middle trying to act normal. At that point, the trap door snapped shut. The last guy who was at the tip of the long of the L moved in, forming a square; all of us stood a little closer, forming a tight little cage. The four of us were standing just close enough to that girl that if she wanted to get out, she would have to push one of us aside.

After the trap was complete, we were just talking to each other as if the girl in the middle didn't exist, trying to hold in laughs. Our mouse in the middle tried to look calm, but after spending about 15 minutes in that cage, she looked increasingly distressed, frantically glancing back over to her origial group. Eventually we opened the cage slightly, and the girl bolted back to her group. That group still made it right behind us, but didn't dare to pass us. Fun times.

(Lest there should be any misunderstanding: the Korean has absolutely nothing against Chinsese-Americans. The Korean likes mainland Chinese people too, but just thinks they could learn some manners. Apparently the Chinese government is putting on a massive public advertisement campaign to clean up their people's acts in anticipation of Beijing Olympics. Maybe things will be better after that.)

Back to the topic. Yes, it is totally true that Koreans do everything fast. Koreans walk fast, they talk fast, they eat fast. Koreans demand fast service, and get pissy if they don't get it. One of the biggest complaints of Koreans who travel abroad is "slow service." It took at least five years for the Korean Father to realize that in an American restaurant, you can only talk to your own waiter. ("How can you get anything," the Korean Father would retort, "if that waiter only comes around once in 20 minutes?)

Why? It's Richard Rorty's favorite answer - survival. People still don't realize how Korea could go from one of the poorest countries in the world (and the Korean is talking about sub-Saharan Africa, rampant-starvation-death kind of poor) to a legitimate economic power. Korea could do that, in part, because it valued speed and efficiency over everything else. The industries that really pulled Korea in the 70s and the 80s were international ship-building and construction, things that depend on large bids and huge projects that often become delayed for years on end. As a newcomer on the scene, the only way for Korean companies to win bids is to promise this: We will do what you want cheaper and faster than anyone else can.

Since then, doing things fast became a national motto for Koreans. You can still hear anecdotes of Jeong, Ju-young, the legendary founder of Hyundai group, personally went to construction sites abroad and slapped the foremen silly in order to keep the deadline. Finishing a big project faster than others is simple: You work when other people don't. So Korean people took working for 14 hours a day, six days a week for granted. The Daewoo group's unofficial motto was "When other people work 9 to 5, we work 5 to 9."

This culture of speed affected every part of the country. Restaurants are supposed to give blazing fast service because workers need to get back to work after 30 minutes of lunch and dinner break. People walk fast and drive like maniacs in order to get to their work on time. Even after Korea went past the industrial stage that requires speed above all, speed became a part of the culture.

This phenomenon is not limited to Korea -- it's really all over Asia, because the entire Asia is going through a crazy growth spurt that Korea went through. The Korean's favorite Chinese restaurant brings food out before the Korean even ordered. Okay, that's not true, but it seriously brings food out within 5 minutes of the order.

Recently -- within the past 15 years or so -- Koreans decided that they could not take the maddening speed anymore, and campaigned for a general slow-down of their lives. Such need was heightened when a series of construction disasters happened, such as a collapsed bridge in Seoul or gas main explosion in Daegu, all of them due to shoddy construction that occurred because the construction company was trying to keep the impossibly near deadline. (That bridge, named Seongsu Daegyo, was on the way to the Korean's middle school from the Korean's old home in Seoul, and the Korean himself saw the collapse.)

Nonetheless, once you get used it, you will realize it's kinda nice to have fast service so that you can be done eating early and get on with your life. So the Korean doesn't see Korea slowing down much after all.

Got a question or a comment for the Korean? Email away at askakorean@hotmail.com

p.s. Found a cartoon that really illustrated this point. This is a cartoon called "386c" by Hwang, Jung-hwan, carried on Dong-A Ilbo: 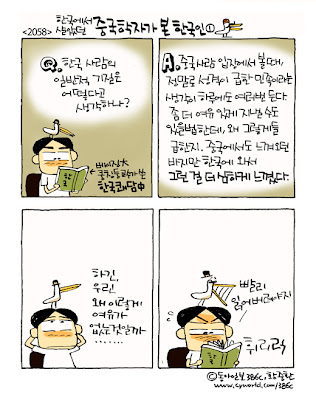 Title: Koreans Seen by a Chinese Scholar Who Lived in Korea

1st square - Q. What do you think the general trait of Koreans is? In "Fun Talks about Korea" by Kung Qing Dung, professor Beijing University.

2nd square - A. From the perspective of a Chinese person, the thought that they truly are impatient people comes to me several times a day. Seems like they could take it easy a little bit, but why are they in such a hurry? I felt that way in China as well, but felt it even stronger after I came to Korea.

4th square - Let's hurry up and finish this. (Flip flip)