First of all, congrats on your graduation! Secondly, as a second generation Korean I have to admit that my knowledge of Korean History prior to the Korean War is practically nil. On the AZN network, they keep showing this miniseries called Jumong. Being part of the MTV generation brought up by Cliff's Notes and ESPN highlights, can you give a brief description on who he is and why he's important?

Who the Hell is Jumong.

Thank you for the congratulations. Yes, the Korean graduated, which means that it’s too late to fail him and take away his degree.

Onto the question. Jumong, according to ancient history, is the half-historical, half-mythological founder of Goguryeo, one of the three kingdoms that occupied the Korean peninsula from around 60 BCE all the way into 7th century. (The other two are Baekje and Silla.) 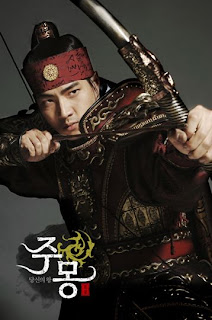 Since this is such an ancient history, the circumstances of his birth are completely mythical (and kinda cool.) His father was Haemosu, the Prince of Heavens; his mother was Yuhwa, daughter of the river god Habaek. Haemosu basically hit Yuhwa and left, running back to heaven. Disgraced, Yuhwa had to leave her home, and eventually became a concubine to King Geumwa of Dongbuyeo (East Buyeo) kingdom.

Yuwha later gave birth to a giant golden egg. (For some reason, Korean mythology always involves a legendary figure being born out of a giant egg. In Korean’s opinion, it sounds cooler than virgin birth for example. After all, you can lie about virgin birth, but it’s hard to lie about an egg being born out of a woman.) Geumwa tried to destroy the egg by smashing it, but the egg would not break. Then he left the egg in the wild hoping that animals would eat it, but the animals instead protected the egg from harm. The egg was then returned to Yuhwa, who nursed it. (How???) From the egg hatched a baby boy, who was named Jumong, meaning "skilled archer”.

Jumong’s archery skill was out of this world. His first words at age 1, apparently, were “Mother, give me a bow and arrow.” With a tiny bow, he would shoot and kill the flies that bothered him. He grew up to be an archer and warrior renowned all over the kingdom, which made other princes of Geumwa jealous. They plotted to kill Jumong, and Jumong had to flee. As he fled on his horse, he approached a fast-running river. Jumong pled his life to his father Haemosu in heaven, and turtles and fish of the river floated over the water, forming a bridge. (Being a son of the Prince of Heaven has its perks.) After he successfully fled, he was admitted to the royal court of Bukbuyeo (North Buyeo), and eventually founded Goguryeo by incorporating nearby regions into Bukbuyeo.

So that’s the story, but why is Jumong important? First, you can see that the circumstances of his life would make a good TV show. (By the way, the TV show Jumong is about as faithful to the original mythology as Gladiator was faithful to Roman history.) But secondly, the idea of Goguryeo being a part of ancient Korean history really tickles the fancy of Korean nationalists. (Which is to say that it tickles of the fancy of all Koreans.) Korea’s northern border has remained the same for about 1000 years – it’s the same as the current North Korean border against China, formed by the Yalu (Aprok) River on the west and the Duman River on the east. But Goguryeo, which existed for more than 700 years, stretched from modern Pyeongyang all the way into Manchuria in the north. If Goguryeo’s territory belonged to Korea now, Korea’s size would grow by almost 50%. It feels good for Koreans to reminisce about the fact that Korea could have been a lot bigger, and presumably stronger.

This sentiment was compounded by the fact that, at the time of the drama’s airing, there was a movement among history scholars in China who were trying to incorporate the history of Goguryeo and Balhae (the successor kingdom to Goguryeo) into Chinese history. (It was recently abandoned for having no scholastic merit.) The movement was reported widely by the Korean media, and pissed off a lot of Koreans. Paraphrasing Samuel Johnson, patriotism is the last refuge of TV executives.

Got a question or comment for the Korean? Email away at askakorean@hotmail.com